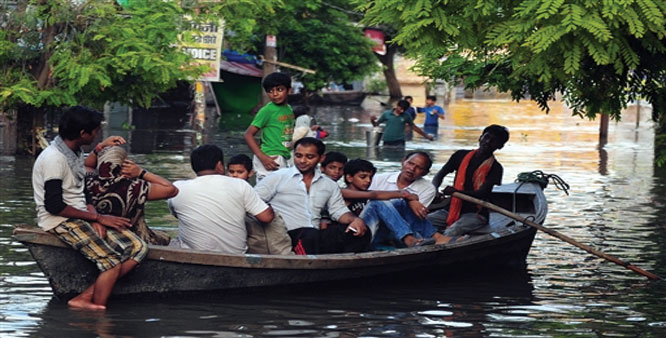 According to relief commissioner's office in Lucknow, with both Ganga and Yamuna in spate and river water spreading to inhabited areas in Allahabad, people have started moving to safer areas.

Over 6,000 people have taken refuge in the relief camps, it said, adding that some 166 villages of Sadar and Beriya tehsils have been affected and a population of over 2 lakh is affected.

Similarly, in Gorakhpur, 35 villages of Khajni tehsil were affected of which 26 were marooned.
Relief camps have been set up in Hamirpur, Varanasi and other districts as well, the office said. Erosion in Ghaghra has adversely hit Khalilabad, Mehdawal and Dhanghata tehsils in Santkabirnagar.

Met office said that light to moderate rains and thundershowers took place at isolated places in the last 24 hours.

Chief amount of rainfall recorded in centimeters are - Kakrahi-6, Bansi-4, Basti, Nagina and Moradabad-3 each. 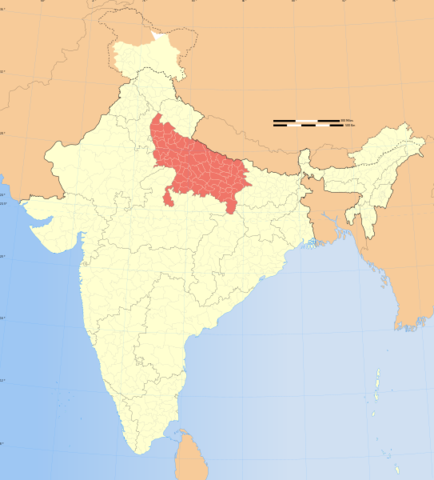 Uttar Paradesh boarders Uttarakhand and is also where the flat land of India dives under the Himalayas.

What is lost in the reports on horrific and record breaking flooding is the role that heaving or shifting ground plays in the inability of water to drain in its accustomed manner. The N American continent is in a bow, the tip of Mexico pulled west while the top part of the continent stays in place. The Aleutian Islands and the tip of Mexico are the ends of the bow. What happens when the land to the east of the Continental Divide is stretched in this manner? Grab the edges of a rumpled blanket and pull it taut and watch the blanket almost rise from the bed. Rivers drain along the lowlands, and when these rise as the land is being stretched, the rivers cannot drain as before.

Examine this aspect of horrific flooding in various parts of the globe. Uttarakhand in India is where the flat land of India dives under the Himalayas. The land is being pushed down, changing the landscape for water that must drain away from this point. Water may drain as it did before, but more slowly, may accumulate at certain points before being released and then break through an earthen dam to be released in a rush. The Eurasian Plate is being stretched, sinkholes and twisting rails a plague from the UK past the Black Sea region and onto the far East. Thus stretched, river bottom lands in many places will interfere with drainage, causing flooding. LAHORE - While basmati export has already plunged to low of 0.6 million tons from 2.1 million ton in 2013, the recent floods have ruined the 50 per cent of the Basmati growing area in the country.
“The recent floods have once again ruined standing crops on more than 5 lac acres of Punjab. The Basmati Rice crop being the most affected is a great setback to the country’s export earnings and the farmers’ incomes. “The farmer today has lost his investment and has no hope of any recovery till next year,” observed President of Basmati Growers Association, Ch Hamid Malhi.
He said that floods have not ravaged these lands for the first time but it is very unfortunate that no lessons were learnt from earlier experiences. There is a complete lack of futuristic planning to address these issues. The plan could also include the production of energy and storage of flood water in large lined channels along the course of these Nullahs to be later used for irrigation.
The farmers and the rural populace demand that the federal and provincial governments make a comprehensive drainage plan for channelizing these Nullahs to avoid such destruction in the future. The farmer hopes that the government not only makes detailed plans but also puts them into action to prevent such devastation in future.
He said that the Aik and Dek Nullahs flowing through the districts of Sialkot, Narowal, Sheikhupura and Gujranwala have once again played havoc in these districts. The Dek Nullah, which is Devak river in Indian Held Kashmir is a tributary of the Ravi river basin with a catchment area of 97 square kilometers. It enters Pakistan north west of the town of Zafarwal in District Narowal and travels along a rather winding course of around 200 miles before it falls into the River Ravi below Sharaqpur in District Shiekhupura. 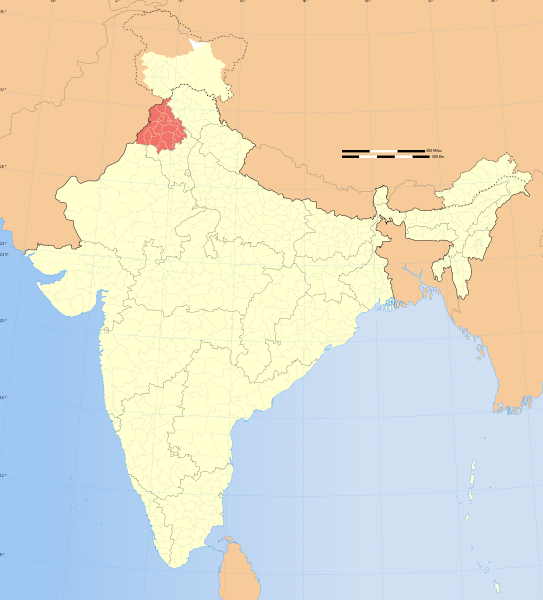 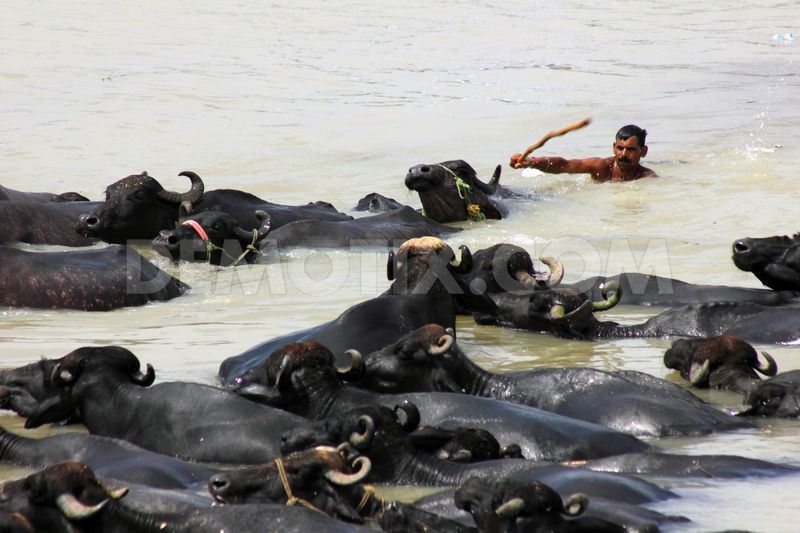 Allahabad is reportedly experiencing its biggest flooding since 1978. Water levels in the River Ganges have been rising causing some residents to have to leave their homes for higher ground. 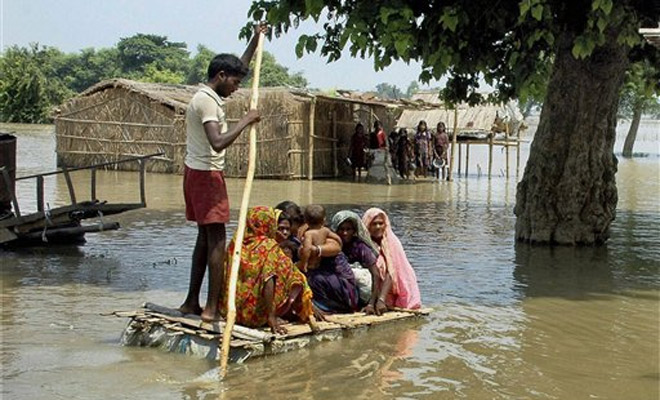 Villagers use a makeshift raft made of bamboo to wade through a flooded path Nkta Diara near Patna. (PTI)

Bihar Chief Minister Nitish Kumar on Wednesday made an aerial survey of the flooded areas on the bank of the Ganga in Patna district and directed the officials make proper arrangements for relief and rescue operations in the affected areas.