What started as movement measuring only fractions of an inch at Kennecott Utah Copper's Bingham Canyon Mine became the biggest slide Ted Himebaugh has seen in his 36 years with the company.

- Vast landslide was "a couple of thousand feet wide' and tall

The world's largest man-made excavation - a US copper mine - has been shut down by an enormous landslide that smashed roads and buildings and left two-thirds of the pit base buried.

Nobody was hurt in the collapse at the massive open-cast Bingham Canyon Mine, run by Rio Tinto-owned Kennecott Utah Copper - largely because workers had been evacuated amid several weeks of warning signs the ground was going to shift.

"We started noticing movement in that part of the mine in February," said Rio Tinto-Kennecott spokesman Kyle Bennett, according to The Salt Lake City Tribune.

He said that indications were that the mine’s wall was slipping a millimetre or so each day. The mine monitors for movement at all times.

But, by Wednesday morning (local time) mine engineers started seeing movement of up to 5cm per day and moved out the 37 workers at the bottom of the vast open mine. The company also warned residents nearby that a slide was possible any day.

"At 11am yesterday we moved everyone out, including those who were working in the bottom of the mine," Bennett said. "All of our employees are safe and accounted for."

Bingham Canyon Mine is the largest man-made excavation in the world. It has been in production since 1906, and features a pit almost one kilometre deep and 4km wide.

"This is something that we had anticipated," Bennett told Deseret News.

Ted Himebaugh, Kennecott's general manager of operation readiness, said he had seen nothing like it in his 36 years with the company.

"Our primary goal now is to determine how we can safely resume operations and provide not only the jobs for the people but money to the state of Utah and economy," Himebaugh told Deseret News.

Kennecott is the second largest copper producer in the US, supplying about a quarter of the country's copper, the company's website states.

On Wednesday evening an extremely large – and in the case this is no exaggeration – landslide occurred in the Bingham Canyon copper mine in Utah, USA.  According to various news reports, the deforming slope was identified some months ago and monitored intensively.  An increasing rate of strain in the hours before failure indicated that a collapse was imminent, and the mining company released a warning about the landslide in advance.  The upshot is that although it has caused considerable damage to the mine, there are no casualties.

The scale is impressive.  There is a fabulous gallery of images of the landslide on the ksl.com website. The landslide deserves a separate post interpreting the mechanics – I will do so in the next few days.  However, the landslide is sufficiently large that it was detected on seismic networks.  Jeff Moore kindly pointed out that the landslide appears on the University of Utah seismic recording station record from Granite Mountain Vault, Salt Lake City:

Meanwhile, Colin Stark noted that the landslide was recorded on the Columbia University global seismic dataset too, which suggests that the volume is in the tens of millions of cubic metres:

Note that in both cases the seismic record is for two events (in the Utah dataset these are the blue and black records).  Landslides have a characteristic form in seismic records, essentially looking like a hairy caterpillar.  I am not sure what the red event is – this does not have this characteristic form.  Both landslides were sufficiently large to be picked up by these networks, which means that there were two very large landslide events here, one at 9:31 pm local time and the second at 11:06 pm.

Finally, many people have sent links to this – thanks to you all.  I will follow this up with another post in the next couple of days about the mechanics. However, this does demonstrate that lanslides in mines are manageable, a lesson that those operating the mine in Tibet (and indeed elsewhere in China) would be sensible to learn.  I will also post again on this landslide in the next day or so – there have been some interesting developments with respect to that one.

Re: Red dust in the tail of PlanetX and Binham Canyon Coppr Mine

With each pole shift the Planet X complex must have left behind a significant amount of dust, dirt, rocks and boulders on earth. Would the Zeta mind estimating approx. how much tonnage of new material has been deposited upon earth over the past 10 pole shifts or 36,000 yrs. The Bingham Canyon Copper Mine, UT has a slight red hue which may be pole shift related. There is also a gravel pit just off of I-15 here in the Salt Lake area that has a distinct red layer of rock in the middle of yellowish rock. The yellowish rock is above and below the red layer. The red layer is 40-50 feet thick. The Zeta have said, earths red soils are not native. ../index/blog1003.htm 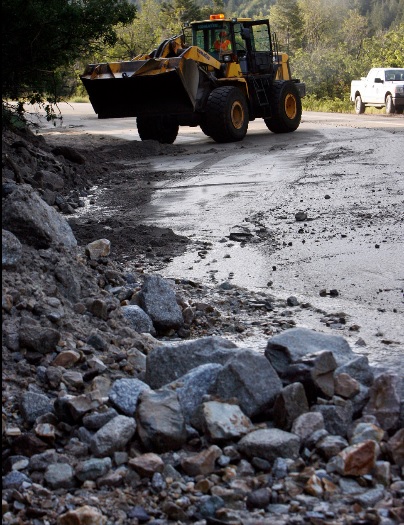 Just hours after crews cleared a rockslide and opened Little Cottonwood Canyon on Friday July 5, another burst of rocks were sent down the mountain and onto the road.

Family members who spent July 4 camping in Little Cottonwood Canyon found themselves caught in a torrent of water and then discovered they were trapped in the canyon by rock slides.

Crews were on scene clearing the debris by about 3:30 a.m., and authorities eventually closed the road at the mouth of the canyon and at Snowbird.  The canyon reopened nearly 12 hours later, but then another slide occurred about five miles up the canyon and closed the road from about 11:30 p.m. Friday to 6:30 a.m. Saturday.