Hillary Clinton and Obama had a very private lunch at the White House on Monday, December 7, 2015. No photos were taken and the agenda was not revealed to the press. In that the FBI director James Comey is reputed to be of high integrity, and the DOJ Attorney General Loretta Lynch also not considered to be corruptible, and in that Hillary has broken countless federal laws by her private server setup and treatment of classified material, and in that it could thus only be Obama who would shut down the investigation or pardon her, what might have been discussed during this private luncheon? I watched her face for any evidence. Is she happy? Is she distraught? The San Bernardino shooting happened December 2, but this did not change her beaming entitlement grin, as seen in photos from December 3. Her facial expression changed around Friday December 4, showing anger at some news, and then after December 7, showing devastation. She looks like she is crying. Did she get bad news from Obama? [and from another] http://abcnews.go.com/Politics/president-obama-hillary-clinton-meet...  The former rivals-turned-amicable colleagues met privately for a 90-minute "informal lunch" at the White House. The lunch was not on Obama's or Hillary Clinton's public schedules, and the White House did not disclose what exactly the two discussed. [and from another] http://abcnews.go.com/topics/news/whitehouse/hillary-clinton.htm?me...  [and from another] http://dailycaller.com/2015/09/21/eight-laws-hillary-clinton-could-...  A federal prosecutor would naturally focus first on the most serious allegations: willfully transmitting or willfully retaining Top Secret and Compartmented (TS/SCI) material using a private server system. ... The prohibited conduct is the unauthorized removal of classified information from government control or its retention in an unauthorized location. … the accused transferred and held the only copies of official government records (whether classified or not), the very existence of which was concealed from government records custodians. … The prohibited conduct is the conversion of official records (whether classified or not) to the accused’s exclusive use and the mens rea is simply the intent to do so. … an accused destroyed, withheld, or concealed the existence of official records being sought under subpoena by a committee of Congress. … an accused knowingly concealed the existence of official records being sought by the Department of State Inspector General . … The wire fraud conviction can be sought if it can be proven that accused used electronic means of communication in undertaking such scheme or artifice to defraud. … If any accused and any third party can be proven to have colluded in any violation of federal, criminal law, then all involved can be charged with criminal conspiracy as well. [and from another]http://www.foxnews.com/politics/2015/11/12/fbi-expands-probe-clinto...  Fox News is told agents are looking at U.S. Code 18, Section 1001, which pertains to "materially false" statements given either in writing, orally or through a third party. Violations also include pressuring a third party to conspire in a cover-up. Each felony violation is subject to five years in prison. This phase represents an expansion of the FBI probe, which is also exploring potential violations of an Espionage Act provision relating to "gross negligence" in the handling of national defense information. [and from another]http://www.politico.com/story/2015/11/hillary-clinton-email-fbi-pro... The FBI’s recent moves suggest that its inquiry could have evolved from the preliminary fact-finding stage that the agency launches when it receives a credible referral. “This sounds to me like it’s more than a preliminary inquiry; it sounds like a full-blown investigation,” said Tom Fuentes, former assistant director of the FBI. “When you have this amount of resources going into it …. I think it’s at the investigative level.” The FBI ultimately decides whether to take a preliminary inquiry to a full-fledged investigation — and if it does so, it is under no obligation to say so publicly. [and from another] http://www.wnd.com/2015/11/hillary-acolytes-trying-to-shut-down-fbi... The Clinton “spin machine” appears to be behind a report claiming Director of National Intelligence James Clapper has overruled the finding of Intelligence Community Inspector General Charles McCullough that two Hillary Clinton emails sent on her private server contained highly classified information.  One of the emails was about North Korea’s nuclear weapons program. The Office of the Director of National Intelligence “has made no such determination and the review is ongoing.’ 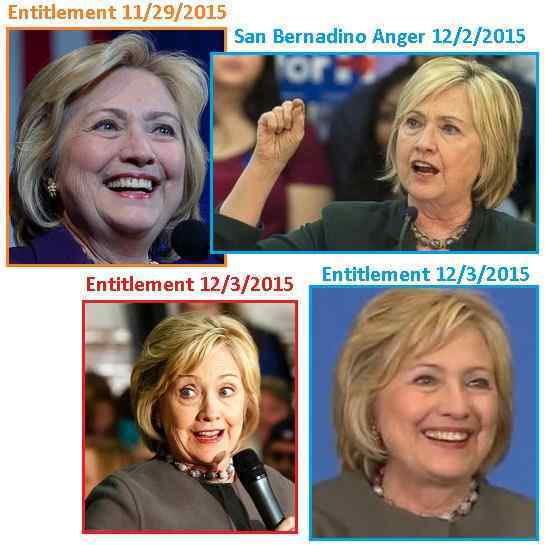 Hillary has been going on the assumption that Obama would not dare allow an indictment to proceed, as there are no other Democratic candidates polling well enough against the Republicans at present. She feared Biden entering the race. But the idea that he withdrew as the announcement was about to delay the 2016 elections never entered her mind, as she likewise does not think Obama will pull off the announcement.  By entering the race early, with a huge war chest from her Wall Street and Clinton Foundation sources, she is assuming she is indeed too big to indict, and is clear to sail to the White House.

The outcome depends on Obama, who indeed plans to defer the 2016 election at some point due to the announcement admitting that Nibiru exists. Biden is expected to announce when and if the election cycle resumes, but it is unlikely to resume. Obama was indeed giving her bad news during the December 7 luncheon, as the FBI has sufficient cause to indict on several fronts, and the DOJ will proceed. Obama will not stop this, nor issue a quick pardon, so Hillary, under this cloud not only cannot posture as she has but in point of fact will be precluded by law from holding the office of President.

As Hillary proceeded to maintain her campaign after this news from Obama, is appears she does not intend to exit as a candidate gracefully. She will be pushed, kicking and screaming, from the stage. She will at first basically dare Obama to proceed, trying to create such momentum, so many endorsements, so much cash and endless campaign ads on TV, that he will change his mind and lose his resolve. Obama asked Hillary to consider the Democratic Party, the impact on its reputation, but Hillary is hardly of that mind set. How this drama ends is in the hands of the Democratic Party, as the parties in the arena have taken their positions and picked up their weapons. Game on!