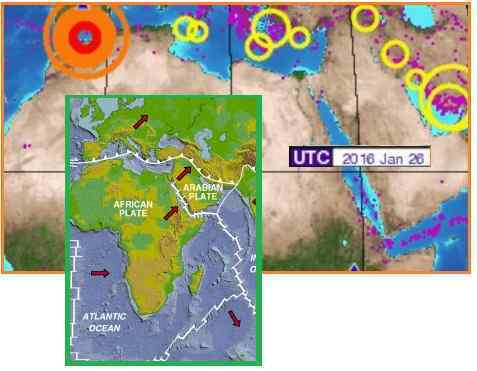 Should France maintain their state of emergency, in light of continuing terrorist attacks? Absolutely. They were attacked twice, recently, during the Charlie Hebdo attack a year ago and again during the Paris attack in November, 2015. France is a very visible leader in the fight against ISIS and oppression in the Middle East. They were quick to fight Gaddafi in Libya, have joined Russia in the fight against ISIS in Syria, and have espoused a Palestinian State, despite objections from Netanyahu.

We warned that only a strict crackdown on sleeper cells and more control over the flood of refugees would protect Europe from repeated attacks. This is even more important now that the African roll has picked up steam. Earthquakes along the African border with the Eurasian Plate will disorient the populace of North Africa and southern Europe alike. High tides will develop, suddenly, swamping boats. Without an explanation of why the African Plate is rolling, and what the outcome will be, people will be given to panic and speculation. Thus distracted, more illegal immigration into Europe will occur, supplying sleeper cells there.