I posted this blog on June 10, 2010, and now I add some time-series pictures captured from pole shift movies illustrated in  3-D which had been produced with 6 movies viewed from different directions; North Pole, Atlantic, Africa, Asia, Pacific and South Pole. These movies are unavailable now, but fortunately I had downloaded them in my computer before. The producer of the movies seems like Willem, judging from the description on "Troubled Time". I just show some pictures captured from Willem's movies here. I thank for the TT team including Willem very much.

I made the figures of the crust movement during the pole shift based on the "Scripted Drama by ZetaTalk". 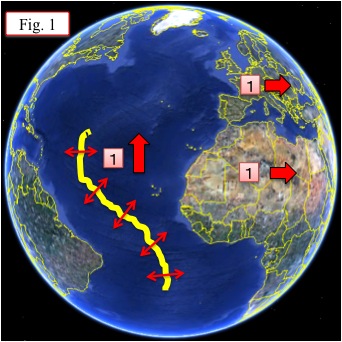 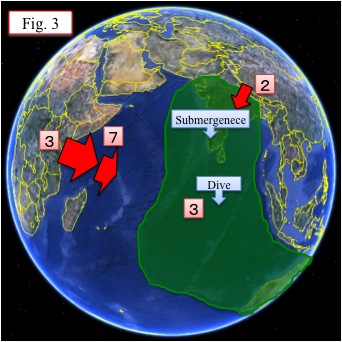 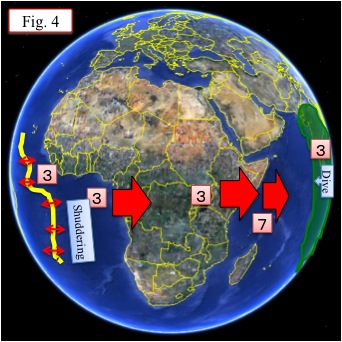 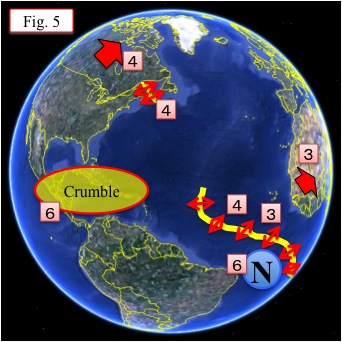 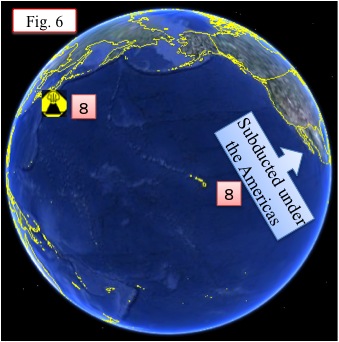 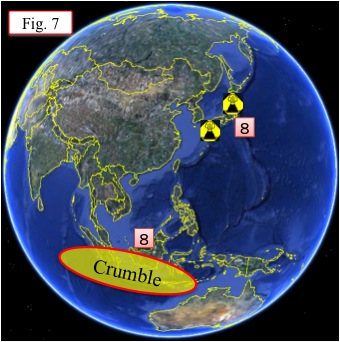 The stage having been set, then, the crust movement steps during the hour of the shift are as follows:

1. As the South Pole, gripped by the passing North Pole of the 12th Planet (Planet X), moves north, the crust is torn from the core and freed in this way, allowing pre-existing stress points to relax. Thus, Europe and Africa move further east, allowing the Atlantic to rip apart during the slide northward. (Fig. 1)

2. The immediate effect of the massive plate housing Europe, Russia and the Near East to move is felt most strongly in India, as the Himalayas are driven over India at this point, effectively submerging this country in a wink. (Fig. 2)

3. The effect of the Indo-Australian plate taking a dive under the Himalayas is to relieve tension along the African Rift, such that this tears, promptly, but in shuddering steps with halting adjustments and pauses between shudders. In essence, the movement eastward of the African continent is a momentum creating this tear. (Fig. 2, 3, 4)

4. During the tearing of the Atlantic Ocean floor, and the dragging north or the North American continent, an already existing tear in the St. Lawence Seaway tears further, essentially the weak link in this landmass held at so many points to the further side of the Atlantic Ocean. Canada moves north, while the rest of the Americas cling to the Atlantic Rift while it separates. (Fig. 5)

5. The movement of the massive plate housing Europe, Russia, and Asia to the east also is expected to rip this plate along the Himalayas, as we have stated, creating an inland bay into the Russian lands just to what is now the north of the Himalayas. This follows, in jerks and tears, over the hour of the shift, along with the tearing of the African Rift. (Fig. 2)

6. When the ocean off the bulge of Brazil has reached the position of the current North Pole, crust slippage stops, creating yet another drama. The major northern hemisphere plates stop, and whatever follows crashes into them. In the case of the Americas, this causes Central America and the Caribbean to crumble. (Fig. 5)

7. In the case of Africa, already sliding eastward, the force is further movement eastward, as subduction of the Indo-Australian plate has already begun, the weaker link already established and momentum in process. (Fig. 2, 3, 4)

8. The pileup is in what was the former Northern Hemisphere, and the compression of the Pacific is creating resistance as plates are subducted under the Americas, and then Japan explodes and Indonesia crumbles. (Fig. 6, 7)

I'm happy if the figures are useful for you to understand the Drama much more.

Please refer to the following ZetaTalk.

Periodically during severe pole shifts, land rises or drops, sometimes moving under the waves. This is caused quite naturally by moving plates, which adjust to being squeezed against each other or pulled apart. Suddenly submerged land can be the result of either dynamic. Likewise, land long under the sea can suddenly pop up, presenting gasping and dying sea life and deep muck that eventually dries to form new and very fertile soil. Continents pulled apart, as in the steadily widening St. Lawrence Seaway or African Rift, can cause land along the perimeter to rise, as the stretch over the curvature of the Earth has been removed, so that the natural buoyancy or shape of the land can take effect. Thus the land in the New England area of America is expected to lift somewhat when the St. Lawrence Seaway tears further apart. Continents pulled apart, as in the widening Atlantic rift, cause sinking land along the shores for several reasons:

1. The curvature of the Earth causes the mid-point between continents being pulled apart to drop.

2. There is less crust to cover the magma underneath, so that rips in the crust form at the weakest or lowest points.

3. Ripped crust at the bottom of ocean rifts allows heavy land along the edge to lose its support, thus it can sink into the magma.

Continents squeezed together invariably find one plate or the other acting as the loser, subducting or fracturing into pieces that slant at an angle to form new mountain ranges. For every adjustment where the continents or land are being wrenched apart, there is a collateral squeezing of plates elsewhere. On the Earth, this squeezing occurs along the Pacific Rim, with Japan and the Philippines, along with the whole western coast of the Americas, getting the brunt of this squeeze. This is often the case, and thus as a result of the coming pole shift, new land will emerge near Antarctica between the tip of Africa and South America due to pressure against the western coast of South America. Due to the strength of the Antarctic plate, this pressure will be relieved by allowing the Antarctic plate to ride over the bordering plates, thus creating new land.

Where this squeezing causes new land to rise is where plates fracture, freeing a portion of a plate to act on its own. Squeezing can force land under, to relieve the stress, but can also pop land up, so that it rides above another plate. What occurs when an overriding plate moves across or pushes against an underlying plate depends primarily on what the underlying plate presents. If the land is fairly flat, the overriding plate will go for a ride, with anything on the underlying plate scraped along or crushed underneath. If the land is hilly or mountainous itself, the hills and mountains will be compressed and crumpled, creating a situation where rocks and earth are flying about, tumbling and spewing.

Where these images is small to be watched about the detail, please go to the link of "Pictures from Movies of Crust Movement during Pole Shift".

Since I'm a wind-bag and my web-page rambles on for a while, I'll make this brief. I've heard that some folks would like to see the pole shift illustrated in 3-D. Incidently, that's something I've started working on, and I'd love to have the team's input. To help, I've signed onto Geocities where I'll post progress reports from time-to-time as work goes on. You can review my work, make suggestions and pitch in if you feel the urge. At present, I'm just beginning, so the page is just there to explain the ins and outs. At the next update, the page will simplify and be dedicated to updates only.
Offered by Willem.