"The stress on the N American plate will resolve by ripping the St. Lawrence Seaway open. A widening Seaway also does not affect just those land masses bordering the Seaway, as buckling occurs inland and afar." ZetaTalk

Three locomotive engineers were killed and dozens of passengers were injured when a Via Rail train derailed in Burlington, Ont. Sunday afternoon.

Among those killed was an engineer in training, Via Rail officials said. More than 40 passengers were taken to area hospitals with various injuries, many of them minor. Three people had to be airlifted to Toronto and London with serious injuries.

The derailment occurred around 3:30 p.m. in an industrial area near Aldershot station, about 60 kilometres west of Toronto. Via Rail train 92 was travelling eastbound from Niagara Falls to Toronto with 75 passengers and four crew members on board.

One of the six derailed train cars crashed into a small building near the train tracks, flipping on its side.

About 60 passengers were initially trapped in the wreckage, as hundreds of first responders worked frantically to free them.

Witnesses described a chaotic scene resembling a "war zone" as passengers scrambled to get to safety.

By 6:30 p.m., everyone was out of the train and all passengers had received some type of medical attention, Via Rail spokesperson Michelle Lamarche said.

She did not disclose any information about the dead engineers who were riding in the locomotive at the time of the crash. One crew member survived and was taken to a nearby hospital with unknown injuries.

"It's very tragic," Via Rail Chief Operating Officer John Marginson told reporters Sunday night. "We are a small company…and we know everyone by name."

Some passengers who emerged from the crash unscathed told reporters they were trying to hang on to anything in sight as the train jumped off the tracks, causing people to fall on top of each other.

At least one child was among the injured, but did not sustain serious wounds, hospital officials in Hamilton said.

Marginson said one person suffered a heart attack during the crash.

For a while, Hamilton General Hospital was operating under code orange, which signals an external disaster.

About 30 passengers were well enough to board a bus to Toronto's Union Station and leave the chaotic scene, Lamarche said.

Lamarche said anyone seeking information about passengers on board Via train 92 should call 1-888-842-6141.

It was not immediately clear what caused the derailment and Marginson said it's "premature" to speculate. It was dry and sunny in the area at the time.

The Transportation Safety Board of Canada is sending a team of investigators to Burlington to pinpoint the cause of the disaster.

The train was equipped with a recording device, which should assist the investigation. TSB spokesperson Chris Krepski said some locomotives also have video cameras, although it's not clear if this one did.

There are now separate investigations underway by the TSB, Via Rail, the Canadian National Railway and police.

Krepski said a full investigation by the Transportation Safety Board could take a year. 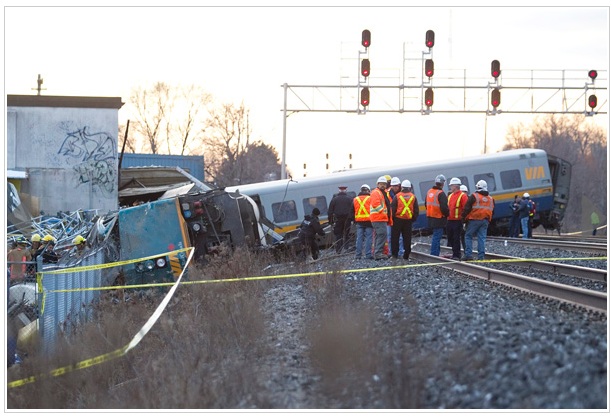 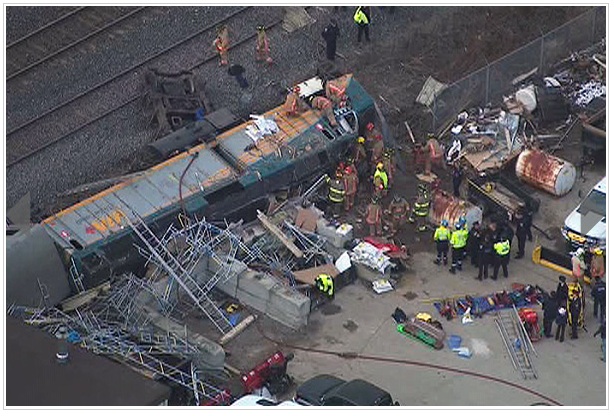 Officers and emergency crews including haz-mat experts are on the scene.

It’s estimated that some 22 cars derailed, one of which caught fire.

Area residences within a one mile radius around the derailment were ordered to evacuate their homes as a precaution.

Amtrak, who also uses the same track, has a passenger train delayed by the derailment. Amtrak sent transportation buses to retrieve the passengers and deliver them to their next stop."

Comment by Corey Young on February 29, 2012 at 5:20am
I thought it was interesting as well Nancy, that they mentioned specifically on the CBC National news that the weather was sunny and the tracks were dry. The first thing i thought was stretch zone.
Thanks for posting Howard.