xxx [and from another] xxx Space X has had successful launches and even successfully landed on its ocean platform in April (http://zetatalk.com/newsletr/issue500.htm). Why is it now blowing up during a test? What is the message? [and from another] https://www.thesun.co.uk/news/1710969/elon-musk-explosions-heard-at... A rocket has exploded at Cape Canaveral space centre – blowing up Facebook’s £150million [$200 million USD] internet satellite. NASA says SpaceX was conducting a test firing of its pioneering unmanned rocket when disaster struck. The Israeli made Amos-6 satellite (pictured) was carrying technology to allow Facebook to provide wireless internet directly to smartphones in sub-Saharan Africa. The Israeli made Amos-6 communications satellite was, according to Tech Crunch, carrying technology to allow Mark Zuckerberg's firm to spot beam wireless internet directly to smartphones in sub-Saharan Africa. SpaceX was leasing the pad from the Air Force for its Falcon launches. The company was conducting a test fire of the rocket ahead of its launch.[and from another] http://www.floridatoday.com/story/tech/science/space/spacex/2016/09... SpaceX can confirm that in preparation for today's static fire, there was an anomaly on the pad resulting in the loss of the vehicle and its payload. The rocket was preparing for a test-firing of its nine Merlin main engines as a standard check of their readiness for launch, and the area was cleared for that hazardous operation.  The satellite built by Israel Aerospace Industries also was destroyed. In addition to launching satellites, SpaceX is one of two companies shipping cargo to the International Space Station commercially, and one of two companies preparing to launch astronauts to the ISS under NASA's Commercial Crew Program. SpaceX had hoped to launch two astronauts on a test flight to the station within a year. [and from another] http://www.bbc.com/news/technology-34451081 December 2016 Facebook is to launch a satellite that will provide internet access to remote parts of Africa, the social network's founder Mark Zuckerberg has announced. In partnership with French-based provider Eutelsat, Facebook hope the first satellite will be launched in 2016. Internet.org is experimenting with different ways of providing internet to hard-to-reach places. Recently, the company told of how it was planning to use a custom-built drone to beam down connectivity. Eutelsat and Facebook will each deploy Internet services designed to relieve pent-up demand for connectivity from the many users in Africa beyond range of fixed and mobile terrestrial networks. Several companies already provide internet-by-satellite, but it is a costly option beyond the reach of most people in the developing world. [and from another] http://www.bbc.com/news/technology-33728704 July 15, 2015 Facebook has built its own drone that will bring internet connectivity to remote parts of the world, the social network has announced. 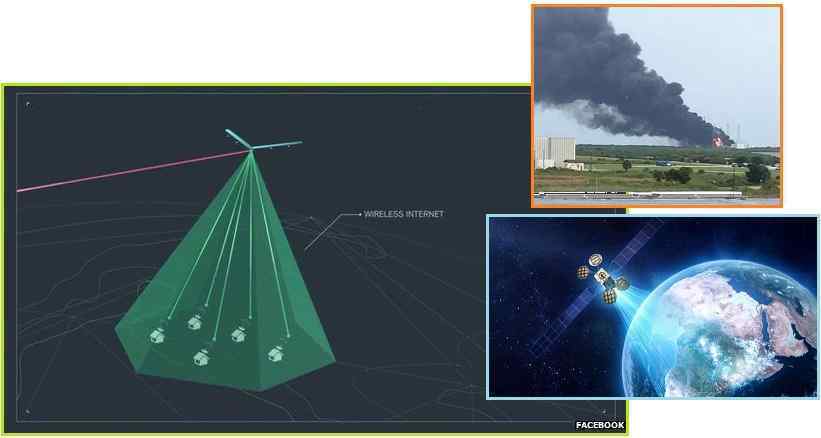 This latest disaster on a Space X launch was a financial and progress blow to several entities – Elon Musk of Space X, Mark Zuckerberg of FaceBook, Israel Aerospace Industries, and NASA. That the explosion happened early in the process, during a pre-launch test, shows that a strong message is being given. Previous messages to Musk involved his intent to help the elite escape Earth prior to the Pole Shift, while participating in the cover-up over Nibiru. When the elite relented, allowing the multi-prong’d announcement about Nibiru to proceed, Musk was allowed to succeed with an ocean platform landing. The explosion thus was not aimed at Musk or his company.

NASA was simply leasing its launching pad, and was not the target either. FaceBook is immensely popular and international, and Zuckerberg had announced almost a year ago that he intended to promote his internet.org via satellites and drones, to provide service to parts of the world with scarce access to the internet. Africa is clearly a key target. It should be no surprise that Africa is also a key target of many elite, who anticipate the high ground of Africa and its future temperate climate to be ideal for settlements and survival. Europe and India will migrate to Africa in droves, prior to the Pole Shift.

Where satellites will be torn from the skies during the passage, prior to the Pole Shift itself they will function to some degree. Thus, those who have migrated to Africa, and set up settlements and formulated defense of their perimeter, will be accessing the internet via one of Zuckerberg’s satellites. As the satellites fail, these will be replaced with the Zuckerberg drones already in operation. All communications in the vast region of Africa will be known to Zuckerberg and his elite allies, who obviously include Israel. This information would be used for enslavement and control, and it is this effort that the Council of Worlds will not allow.