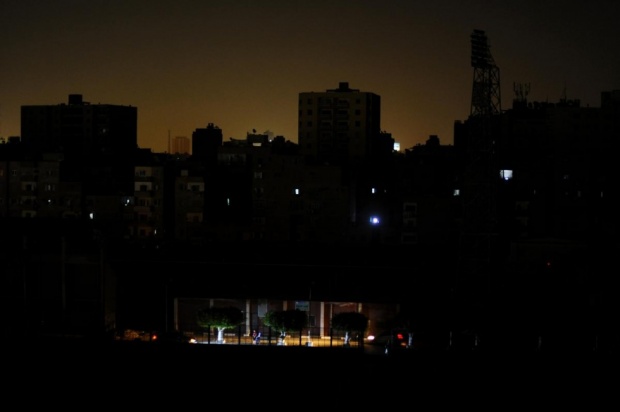 Egyptians suffered massive power outages on Thursday. The six hour outage, which affected most cities, lead to a halt in hospital services, subway lines and TV transmission, despite the government's assertion that the power outage problem would be solved by the end of this year.

According to AP, "the mass outage on Thursday was far more severe and wide-ranging than any of the previous cuts."

The months long power outage crisis is a result of the government's inability to import enough fuel to run the country's power plants, the outdated and poorly maintained equipment, alongside accumulating debts owed to foreign oil companies.

The minister of electricity Mohamed Shaker blamed a "technical error" for the loss of 9000 megawatts and the power outage in most governorates.

A huge power outage caused black-outs across Cairo on Thursday causing major disruption across the city of some 20 million people at the height of the morning rush hour.

Services were completely suspended on one of the city's three metro lines and heavily disrupted on a second, the state MENA news agency reported. The electricity outage brought subway services in Cairo to a complete halt, inconveniencing the roughly 3.5 million Egyptians who use it every day.

Water supplies to households and businesses were also disrupted, while the power outage also affected numerous state institutions including state television channels and radio stations which could not air without electricity to run their facilities.

Energy ministry spokesman Mohamed al-Yamani said that "power is gradually being restored" after a fault cut supply to "some Cairo neighbourhoods".

But two hours later, the whole of the city centre and several outlying districts were still without electricity, as temperatures rose towards their midday high, which can often top 40 degrees Celsius in summer.

Alaa Abdel Aziz, director of Egypt Electric, one of the companies providing the southern governorates with their electric supply, told the Egyptian daily that while the reason behind the power cuts was not clear, the company was doing its best to restore power throughout the country as soon as possible.

But reports from the ground revealed that many of Egypt’s governorates remained in partial darkness throughout the whole day.

..............What can the Earth expect? In 2003 when the charged tail of Planet X wafted past the Earth, the Earth had dramatic blackouts. Both blackouts, caused by a drop in electrical activity, and surge can result. Surge will trigger a shutdown, to protect sensitive electrical equipment. Damaged electrical equipment can be anticipated, blown transformers and fried circuit boards. Certainly satellites are vulnerable, and the satellite failure rate will exceed mankind’s ability to send up replacements. Air travel will become increasingly risky, and mankind’s equipment that relies on electronic or magnetic guidance will increasingly malfunction. All this will increase as the hour of the Pole Shift approaches. A Bangladeshi man walks in a shopping mall during a blackout in Dhaka, Bangladesh, Saturday, Nov. 1, 2014. Bangladesh was hit by a nationwide blackout on Saturday after a transmission line bringing electricity from neighboring India failed

Bangladesh was struggling to restore power late Saturday, hours after being hit with a nationwide blackout that started when a transmission line bringing electricity from neighboring India failed, officials said. The system was not expected to be fixed until at least early Sunday.

The blackout swept across the impoverished and energy-starved South Asian nation at around noon, after the transmission line experienced a "technical glitch" that led to a cascade of failures throughout the national power grid, with power plants and substations shutting down, said Masum-Al-Beruni, managing director of the state-run Power Grid Company of Bangladesh Ltd.

The company restarted some power plants and restored electricity to some areas of the country for a few hours Saturday afternoon. But the plants were not operating as normal and had to be shut down again, two power company officials said on condition of anonymity because they were not authorized to discuss the situation with media.

They said they were investigating the problem, but that it would take at least 12 hours to repair the national grid and restore power to the capital, Dhaka, a city of more than 10 million people.

Dhaka's hospitals and the international airport were continuing to operate, with emergency generators supplying power. But many offices normally open on Saturdays had to send their employees home.

"This is terrible," said Mohammad Hasan, a resident of Dhaka's upscale Bashundhara neighborhood. "We had some confidence in the government over last few years that the power sector was improving slowly. But what is this?"

As night fell Saturday, most of Dhaka remained dark, though officials said they had restored some power to strategic buildings, including major government hospitals, the president's house and the prime minister's residence.

An aide to Beruni said technicians were working to restore the link with India. "Our work is progressing fast. We hope to restore the system to a great extent, if not entirely," said Mir Motahar Hossain.