I made a conceptual diagram of the position of the Dark Twin, appearing as a faint purple orb on the sunset photo taken from Texas on September 7, 2011 by Joe Joe Gutierrez, IMAG0345, and as a monster on the recent cam shot at the German Neumayer Station, which is on the side of Antarctica just under the Atlantic, on April 10, 2012.

The sunset photo taken from Texas on September 7, 2011 by Joe Joe Gutierrez

SOZT
The object filmed on September 4, 2011 is obviously not a lens flare as the camera is moved about and this object does not. Nor is this a reflection on the car’s window, which by the traffic sounds is obviously open. It remains stationary, in line with the Sun, and seems to set with the Sun.  Where there is clearly haze that the Sun is shining through, the object has definition, retains its shape, and even seems to have a shadow on the lower side, as though it were reflecting sunlight, and as though it were slightly below the Sun.  Is it a ghost of the Sun, a reflection of the Sun within the camera? A ghost parallels the shape and size of the Sun, but this object disappears before the Sun goes down over the horizon, which combined with the shadow on the lower side indeed implies that it is just ahead of the Sun along the Ecliptic, setting first.

Venus is in the vicinity, though should be following the Sun as it sets, along the slanting line of the Ecliptic. But if slightly outside of its orbit by pressure from the squeeze within the cup, could be found in that position. This object is Venus, squeezed to be closer to the Earth and no longer able to be in the simulated orbit that has been maintained for Venus since both it and the Earth halted in their orbits in front of Planet X.  Where normally only seen as the evening or morning star, when pushed closer to the Earth and in the line of sight between the Earth and Sun, reflected sunlight allows a planet sized object with the potential for shadow to be seen. We have warned that this time was coming, when dramas from the planets caught in the cup with the Earth would play out, and this time has arrived!

The sunset photo taken on September 7, 2011, where a faint purple orb appears to the RIGHT of the Sun, and before the Sun had set, is as suspected a capture of the Dark Twin. The Dark Twin shares the Earth’s orbit, and this orb is seen along the line of the Ecliptic, close to the horizon at 5:30-6:00 pm along that line when the Sun is still higher in the sky at an angle to the left. The Dark Twin looks purple or violet as the blue light it normally emits is mixing with the red dust in the atmosphere. As those who study color are aware, blue and red mixed together produce a purple color. Is the Dark Twin being pushed closer to the Earth, the cup it shares with the Earth and Venus tightening at this time? It is indeed, and this drama is only starting to play out!
EOZT

Clearly not the Moon (which was nearly Full and in any case behind the cam) nor the Sun (as the object appears in the middle of the night just before and after midnight), this is a capture of the Dark Twin. The cam is near the S Pole, looking at the North facing side of the structure, and as such the cam, or a human viewer, would be hanging upside down looking directly out into space on the dark side of Earth. Where the Dark Twin should be riding to the West, behind the Earth in their shared orbit, it appears to be almost overhead, directly behind and somewhat to the South of the Earth. 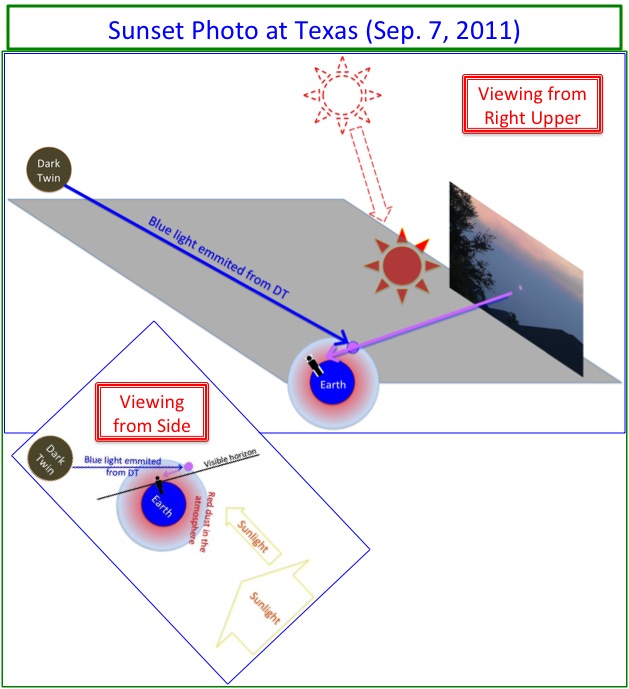 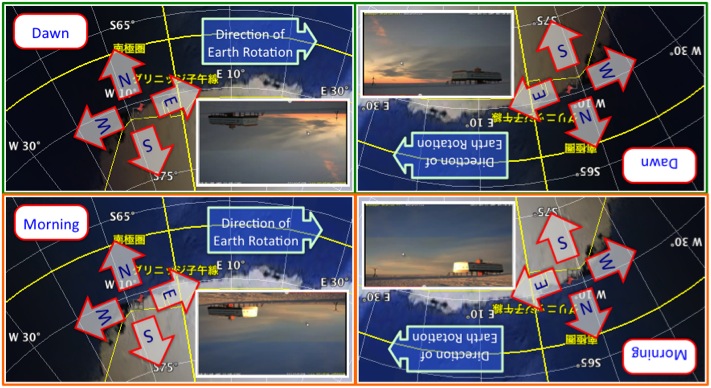 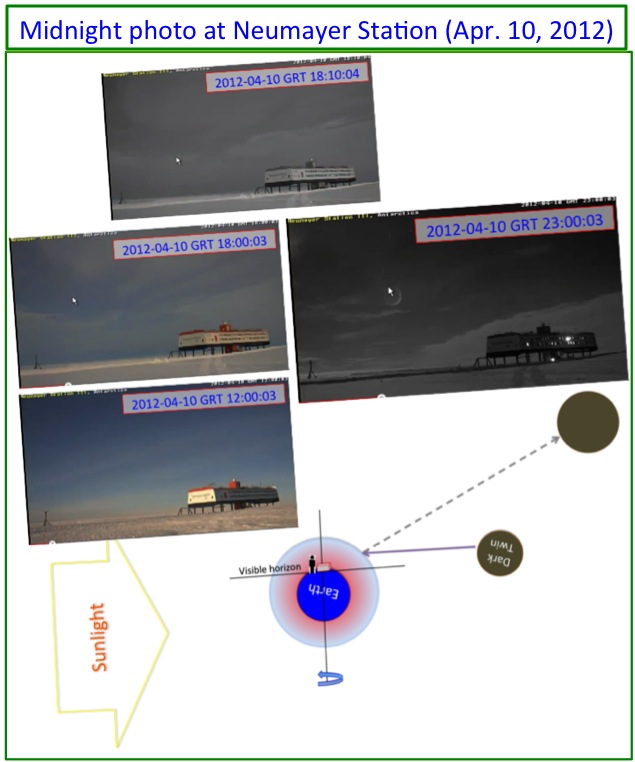 This stuff gives everyone, including me, a headache. One must stand upside down near the S Pole, consider the direction of the rotation of the Earth, consider the span of view of the cam, and the direction of view, consider where the DT first rises into view in the cam, and where it rides at midnight when the cam is looking directly out into space from the dark side of Earth. And that's just for the recent S Pole stuff. Repeat for every other capture.

Comment by Kris H on April 18, 2012 at 5:16am
@Andrew: All of your questions can be answered by searching "Dark Twin" on the Zetatalk.com website. DT normally orbits the Sun along the same orbit as Earth, but in opposition. Its existence was kept quiet since early on, the elite had hoped to ride out the PS there. They thought this was possible since it was offered up by STS aliens, who lie. DT is currently caught in the PX eddy flow "cup" along with Earth and Venus. For the establishment to admit DT existence is to open the door to Zeta accuracy and exposure. So it is covered up, along with alien existence and PX existence.