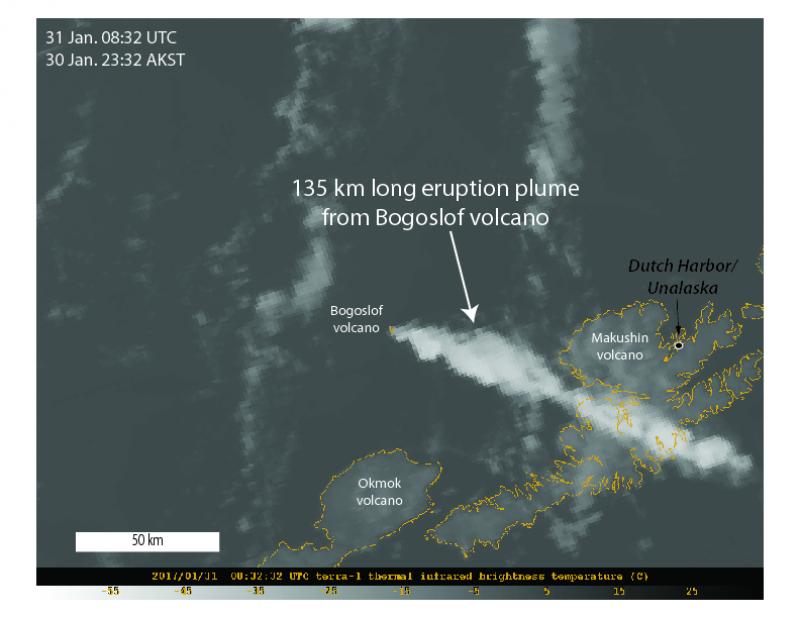 In all my years of monitoring the Alaskan Volcanoes, I've not seen this one --- So it is very much beyond the norm----

Volcanic Bogoslof Island, shown here in a Jan. 2017 photo by Dan Leary of Maritime Helicopters, has grown by more than 170 acres since 2015.
One of the United State’s most active volcanoes has erupted 36 times in the past four months.

Many have blasted plumes of hot ash thousands of feet into the air, prompting red alerts from the Federal Aviation Administration.

Bogoslof Island, located in the Bering Sea north of Alaska’s Aleutian Islands, has nearly tripled in size due to pyroclastic fall and flow deposits.

Pyroclastic flows are one of the most dangerous of volcanic phenomenon, according to the University of California at Santa Barbara’s Volcano Information Center. They are hurricanes of hot gasses and volcanic particles.

No one is in particular danger from the ground flows on Bogoslof though. All of its exposed land is protected as part of the Alaska Maritime National Wildlife Refuge. Side by side comparisons highlight the rapid growth of the Alaskan island, located in the Bering Sea. (Chris Waythomas/AVO/USGS)
There are no instruments there, the New York Times reports, and researchers rely on equipment installed at other locations, as well as satellites to take observations.

Satellite images from 2016 show the volcano erupting from a vent that is just offshore, under the water.

“You can see in these images that a new volcanic cone is being built,” Michelle Coombs, a USGS geologist who heads up the Alaska Volcano Observatory, told the Times in 2016. “If it continues, it might build a cone that is above seawater.”

Side by side comparisons of new and old satellite images show that the island has gained about 200 acres worth of land above the surface of the Bering Sea, though the AVO says the pyroclastic deposits are “highly susceptible to wave erosion and thus additional changes in the configuration of the island are likely.”

In January 2017, freshly erupted volcanic rock and ash formed a barrier that separates the vent from the sea for the first time since the eruptive sequence began, the AVO said in a release. Continued volcanic activity, combined with erosion from wave action, likely will modify the island further, the AVO said, and the vent may sometimes be above, and sometimes below, sea level. 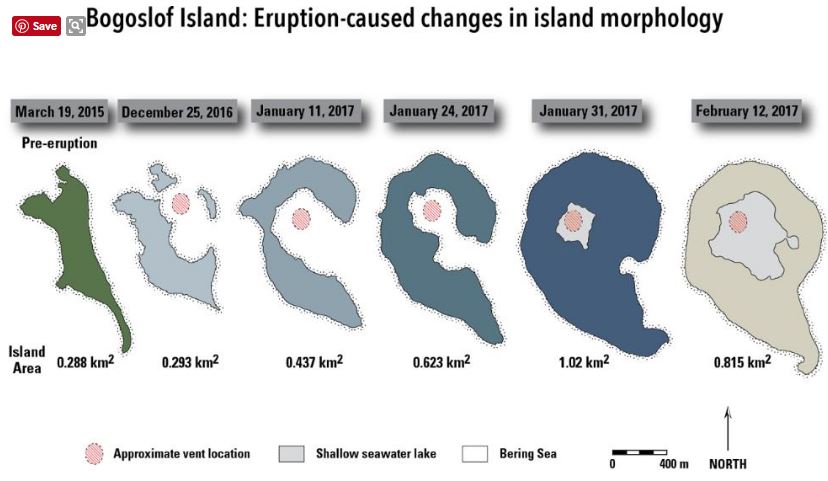 Nearly all of the new material consists of unconsolidated pyroclastic fall and flow (surge) deposits that are highly susceptible to wave erosion and thus additional changes in the configuration of the island are likely. (Chris Waythomas/AVO/USGS)
That’s important, because it changes the nature of the eruption.

Eruptions below sea level are often shorter and the resulting cloud of ejecta is rich with sea ice particles.

Future explosive eruptions may become more ash-rich without the scrubbing effects of seawater, the AVO said. The probability of ashfall on neighboring communities such as Nikolski, Unalaska, Akutan may increase, depending on wind direction.

More ash also makes flying through the area much riskier, the Times reports. Flying through volcanic ash can damage or destroy a plane’s engines, and larger explosions have the potential to affect aviation in a busy corridor for flights to and from Asia...." 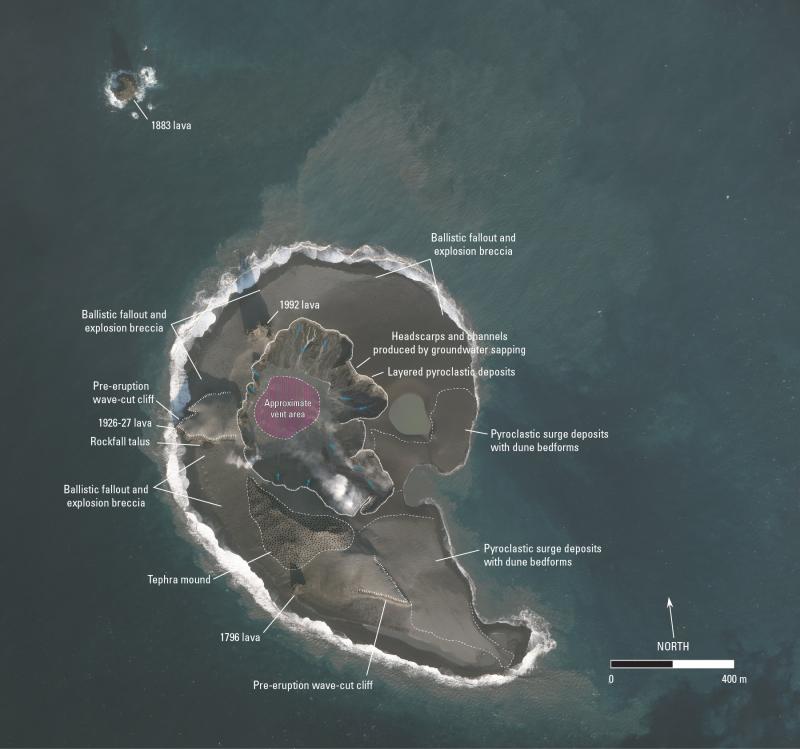 For now--- Bogoslof volcano is back down to ORANGE Alert warning:
http://www.avo.alaska.edu/activity/Bogoslof.php

While Volcano Discovery .com still shows it as RED Alert warning status, they have not updated the page on their website since Jan. 31st. 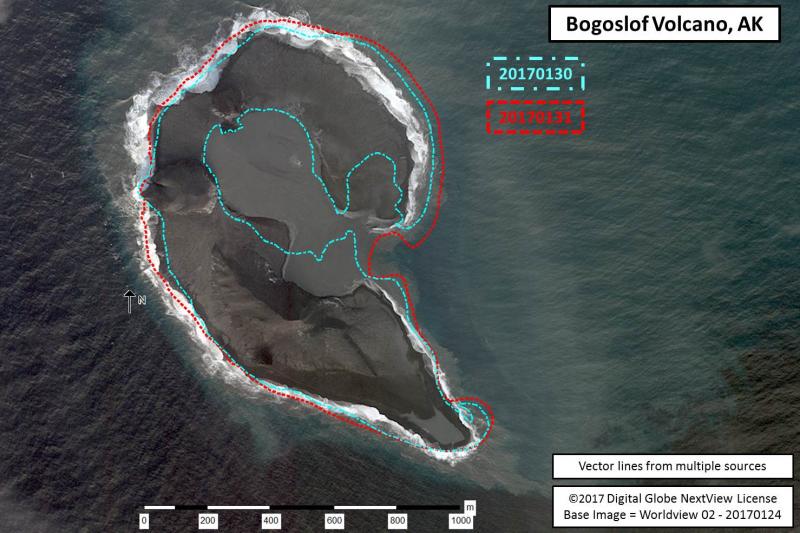 Change of shoreline as of Jan. 31
http://www.avo.alaska.edu/ Sorry--- finally got the EMBED code figured out.

Bogoslof Volcano is back up to RED Alert status warning:

Morphologic changes in the size and shape of Bogoslof Island resulting from recent eruptive activity as of January 24, 2017. 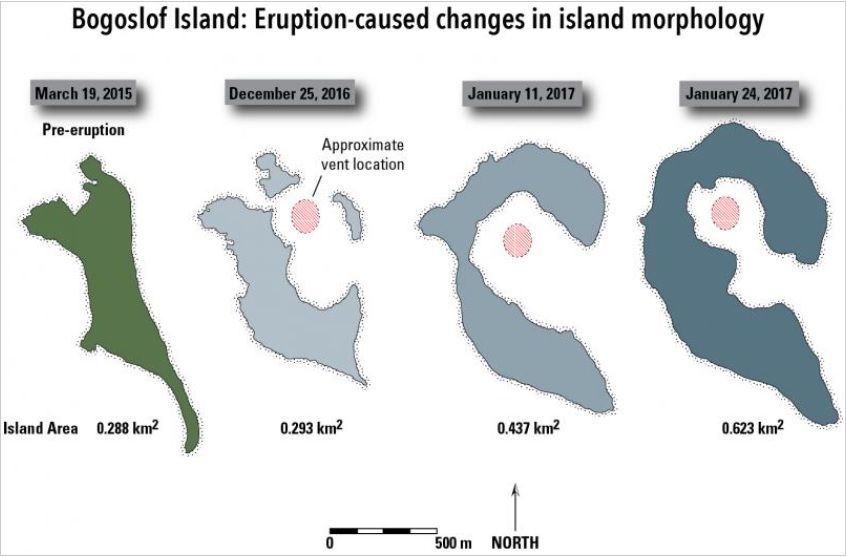