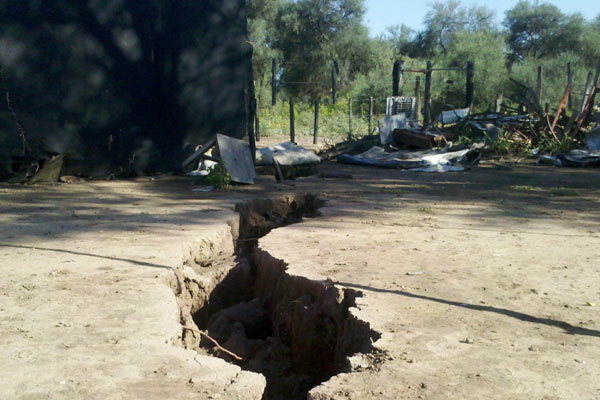 Affecting dozens of families in Otumpa (Dept. Moreno) a deep crack about 3 km long and caused damage to homes and ranches structures.

[05/01/2013] concern and surprise. Those are the feelings that causes the appearance of a deep crack that "divide" the village in two.

As explained by locals, the crack became visible after the downpour that hit the area the morning of 25 December, which rushed more than 200 mm in a short period of time.

The rain caused damage to rural housing and precarious constructions so several families had to be assisted by the provincial government and organizations like Caritas Añatuya.

Precisely, this NGO volunteers sent the pictures that illustrate this note and were shots when bringing aid to families affected by the storm.

They reported that the crack extends at least 3 km up into the forest where presumably continues. The people do not believe that the origin of it was the storm but speculate with some previous earthquake caused the separation of the earth and the rain "washed" to leave uncovered.