7 of 10 Arabian plate roll in floods 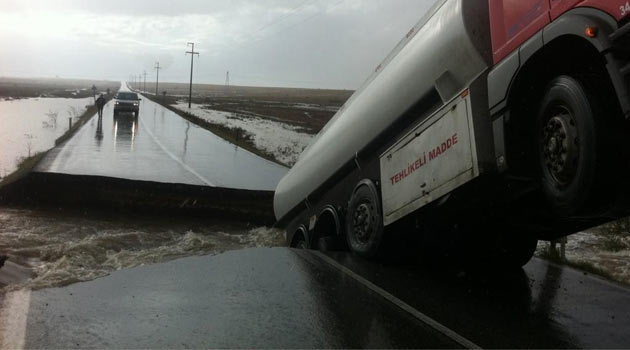 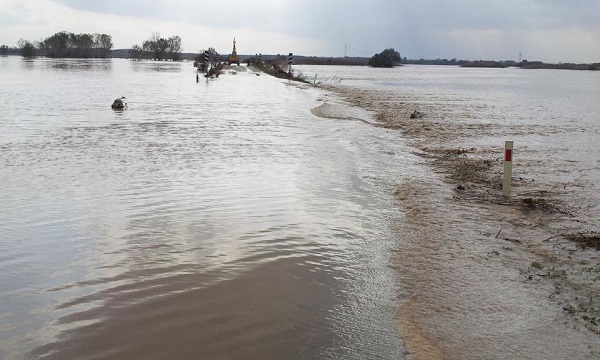 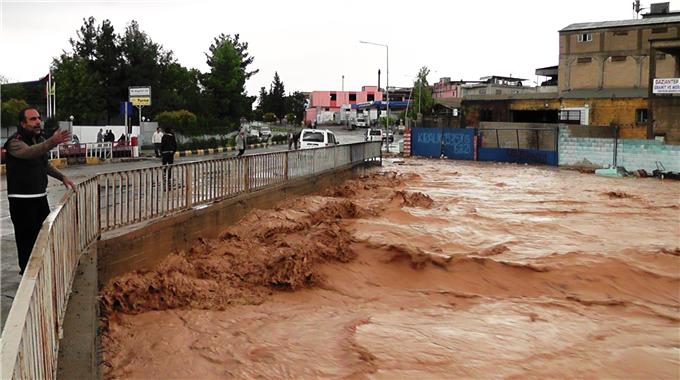 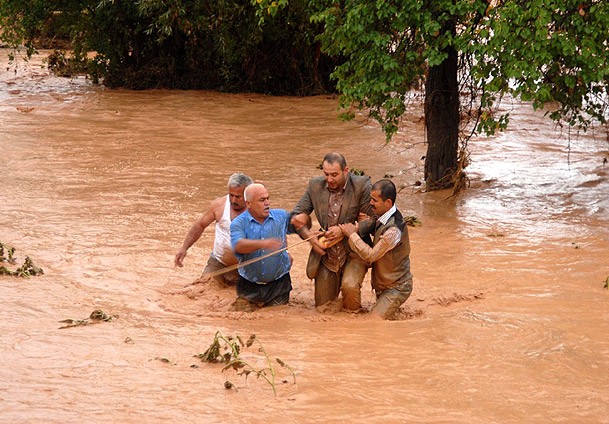 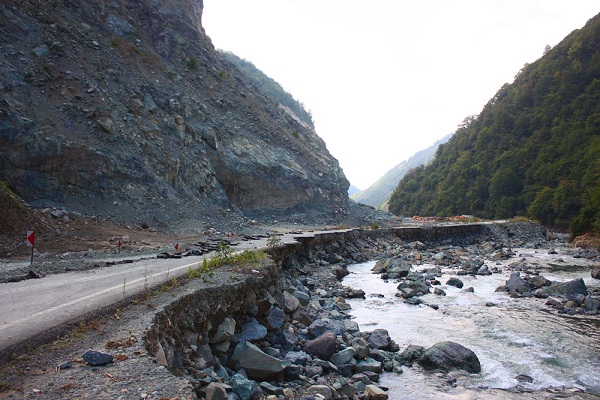 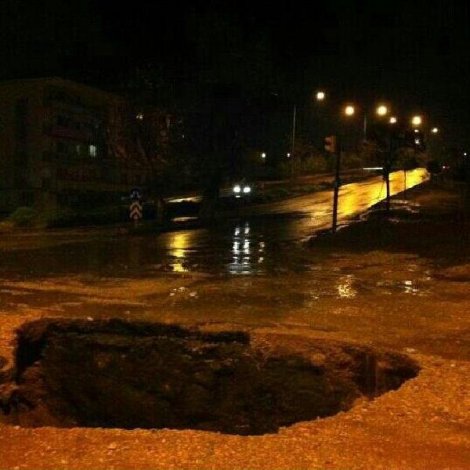 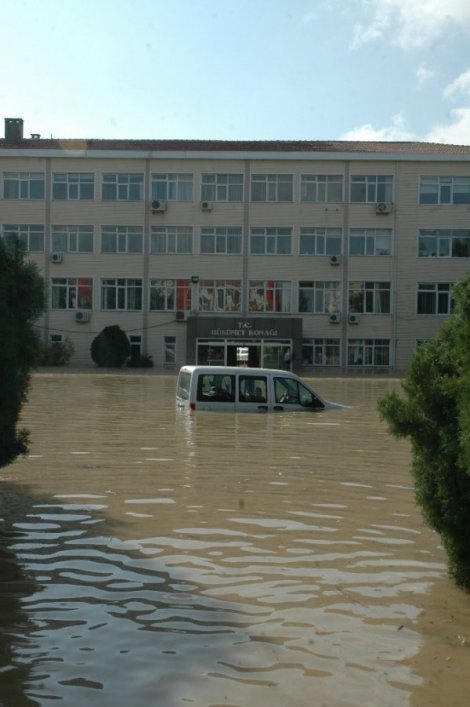 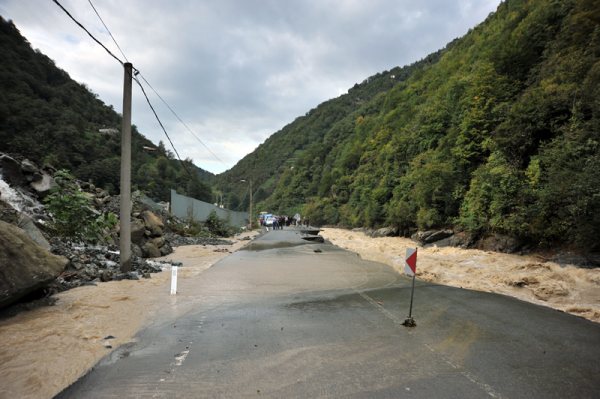 23.10.12. Torrential rainstorms in Turkey's western region of Thrace on Monday caused flash flooding in the provinces of Kırklareli and Tekirdağ, claiming the lives of three.

What started as heavy rains turned into a flash flood on Monday evening in the town of Lüleburgaz in Kırklareli province. Houses and workplaces became inundated with the rain waters overflowing from the town's river. The Lüleburgaz-Çorlu highway was opened to traffic after being closed for seven hours due to the torrential rains. Zehra Demirel (93), Siyami Yeni (45) and Semih Yeni (21) drowned in the flood in Büyükkarıştıran, a town in the district of Lüleburgaz, and two have been reported missing during the flash flood so far. Büyükkarıştıran Vice Mayor Mesut Çolak told the Anatolia news agency that people escaped the flood by climbing onto the roofs of their houses and trees until they were later rescued by civil emergency rescue teams.

In Tekirdağ, around 300 people were rescued by firefighting teams after being trapped in houses flooded by the rains. Two villages in the Çorlu district were also reported to have been affected by rivers swelled by rainfall.

Tekirdağ Governor Ali Yerlikaya announced on Monday that the roads between Çorlu and Kapaklı and the village of Beyaz would be closed to traffic due to possible damage to bridges as a result of the floodwater. Road damage was also reported in the region. Damage assessment is planned for the affected areas, according to comments by Yerlikaya.

All schools were closed in the districts of Saray and Çerkezköy on Tuesday due to continued precipitation. Küçükyoncalı village head Ali Yalçın told the Cihan news agency in Tekirdağ that their village was badly damaged by the flash flood. “Most of the crops and hay bales were damaged and three houses were destroyed during the flash flood,” said Yalçın.

Meanwhile, the continuing precipitation resulted in financial losses in parts of the western province of Çanakkale on Wednesday. In addition, damage assessments will be undertaken in the districts of Biga and Lapseki. Some residents of Lapseki took advantage of the heavy rain by collecting the branches of trees washed up on the shores from forests in higher areas. Weather officials in Çanakkale predict the rain to let up by Wednesday.

The General Directorate of Meteorology announced that heavy rain is in the forecast for Bandırma, Erdek, Avşa and Edincik, all in the western province of Balıkesir, warning authorities and residents to take preventive measures.

Flash floods earlier in July claimed 11 lives in the coastal Black Sea province of Samsun. Heavy rains caused Samsun's Mert River to overflow, flooding nearby homes and shops and stranding cars in the Canik district. Damage included an apartment building built by the Housing Development Administration of Turkey (TOKİ) whose ground and first floors were flooded.

The province was devastated by the rainstorms, which caused not only flash floods but also landslides.

Many houses and workplaces were flooded by muddy waters in Marmara and Avşa islands and teams from the Balıkesir Municipality worked hard to clean up the mud and debris throughout the night.

Stating that the floods caused great damage in the province, Balıkesir Governor Ahmet Turhan said damage assessment work had begun in the area.

“We are trying to minimize the loss caused by the flood,” Turhan remarked.

Heavy rain also hit the İstanbul province late on Tuesday. Many streets, homes and workplaces were inundated in the Sarıyer and Beykoz districts. Rains continue in the province.
http://www.worldbulletin.net/?aType=haber&ArticleID=97620

25.10.12. At least three people were killed in the southeastern province of Gaziantep yesterday when flood waters swallowed the bus in which they were traveling.

The passenger bus and a privately owned car were dragged into flood waters on the Gaziantep-Şanlıurfa D400 highway early in the day. Search and rescue teams searching the area later recovered the bodies of three women.

But Gaziantep Metropolitan Municipality Fire Brigade Unit Manager Ömer Yalım told Anatolia news agency by telephone that there could be more bodies at the site.

“Only three bodies have been recovered so far. But we have no clear information about the number of passengers on the bus. There are strong hints that there is another body in the flood-hit area. I believe we will be able to conduct our work more easily after the waters recede,” he said.

Twenty-six passengers were rescued from the bus and taken to nearby hospitals, while the bodies were taken to Gaziantep Forensic Medicine Institution for autopsies. According to the Office of Civil Defense in Mecca province, so far were found bodies of 10 dead persons, most of them are women and children. Eight people from the victims - family members, their bodies were found inside the car, the road washed away a powerful current. Several people are still reported missing.

Floods in western Saudi Arabia, on the Red Sea, in recent years more and more destructive and are often accompanied by numerous victims. The most tragic consequences caused flooding in November 2009 in the city of Jeddah, which killed 123 people, and the city has suffered enormous material damage.

Flood wipes off family of five in Saudi Arabia

A man, his wife and three children were wiped off by flood following a torrential rain in Rabigh governorate in Saudi Arabia on Sunday night. According to Saudi Gazette, a Saudi local tabloid, the family of five were inside a family car when the rain started and resulted into flood. The paper reports that another man, his mother and aunt were similarly swept away inside their car by the flood. It said that two men, showing some kind of bravado, rescued no fewer than 30 people as they were being carried away by the heavy water, though one of them paid the supreme price as he too was drowned. The Makkah civil defence directorate spokesman, Col. Sa'eed Sarhan confirmed the incidence, saying that his men recovered all the dead bodies from the deluge area after searching for all through the night upto Monday afternoon. Col. Sa'eed advised citizens and foreigners, especially the over four millions pilgrims from various parts of the world for hajj rituals in the Kingdom to keep abreast of weather updates. He asked them not to go near any valley during heavy rains. 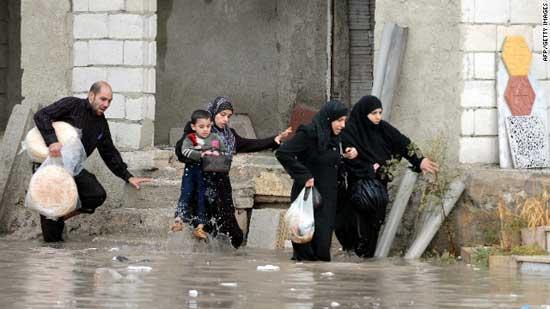 The intense conflict between government forces and rebels has damaged the city’s sewage system. It took only a few hours of rain to create the back up. Aleppo has more than a million people.

It’s estimated almost half of them live in informal settlements, which adds to the problem. To make matters worse, winter is the rainy season in Syria.

22.10.12. Two people were killed in flash floods in Aqaba caused by heavy rain, while the southern part of the Amman-Aqaba highway was completely inaccessible due to the unstable weather conditions.

The Jordan News Agency, Petra, quoted a medical source in the port city as saying that a 10-year-old girl and a 55-year-old man were pronounced dead upon arrival at the emergency room of Princess Haya Military Hospital after the floods swept them into the sea.

A source at the Civil Defence Department (CDD) said that rescue teams were on high alert in Aqaba, around 330km south of the capital, after heavy rain flooded the Red Sea resort and the surrounding areas.

There were several injuries, according to a CDD officer, who said a phosphate company vehicle overturned because of the weather and its driver was injured. There were no further details available by late Sunday evening.

Part of the Aqaba-Qweira road was closed because of mudslides, with police expecting the 50km section of the highway to be re-opened after 1:00am Monday.

The dusty weather was blamed for a pileup involving eight vehicles on Aqaba highway around 90 kilometres south of Amman, police spokesman Lt. Col. Mohammad Khatib told The Jordan Times, adding that “there were mild injuries”.

The Jordan News Agency, Petra, reported earlier that 21 people were injured in the accident. 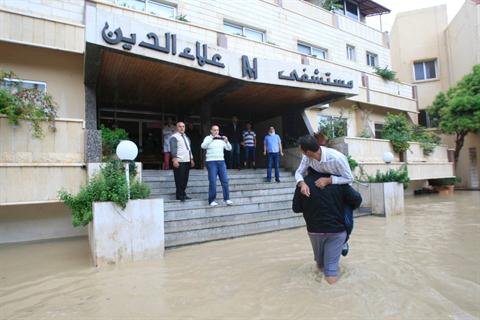 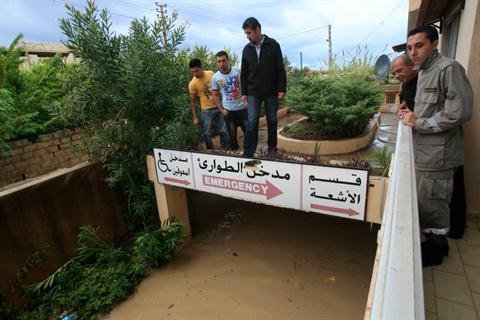 Hundreds of patients at the Kharroubi and Alaaeddine hospitals in Sarafand, south Lebanon, were evacuated in the early morning hours after water flooded the ground and first floors of the medical venues.

Emergency units and X-ray departments were among the wings at the hospitals that were affected by the flooding, which caused panic and the evacuation of patients to nearby medical institutions.

“The water level has reached two meters and wrecked everything, a hospital employee at Alaaeddine Hospital said.

"We now estimate our losses at millions of dollars,” she added. 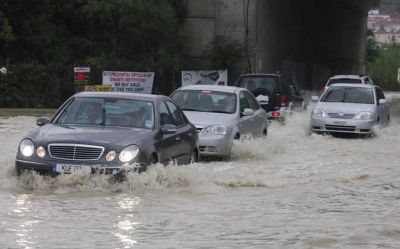 25.10.12. HEAVY downpours caused extensive flooding across areas in the capital Nicosia yesterday, with five vehicles being engulfed by water and carried away by the currents – with police resuming their search for one car that was swept away in the SOPAZ area last night.

It is not known if there is anyone in the missing car, which is now the focus of an extensive police search which began at first light this morning.

Four other vehicles were swept away by the water, with emergency services managing to rescue two women and children.

The districts of Strovolos, Acropolis and Dasoupoli bared the brunt of the storms, where fire department officials were called to dozens of homes to help pump flood water from basements. 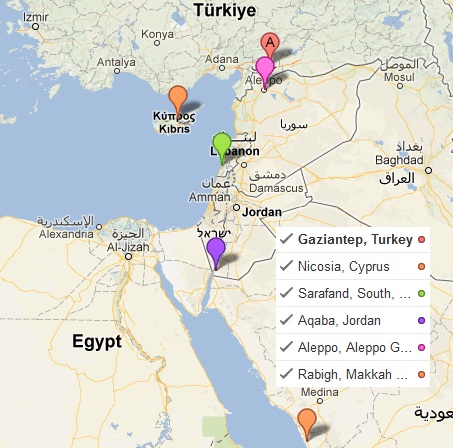 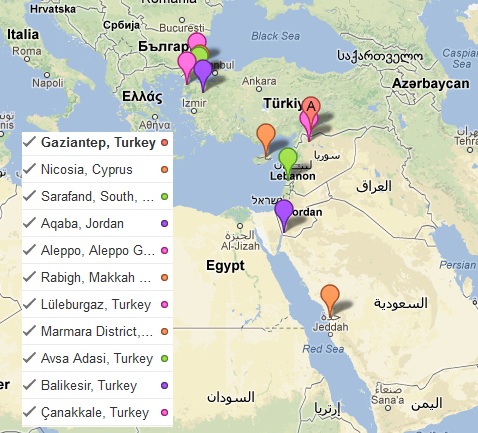