As many as 13 people are feared dead under the rubble of a phosphate mine that collapsed on Wednesday in a remote village in Tarnawai union council, 28 kilometres from Abbottabad.

ABBOTTABAD: As many as 13 people are feared dead under the rubble of a phosphate mine that collapsed on Wednesday in a remote village in Tarnawai union council, 28 kilometres from Abbottabad.

Eleven workers and two owners are among the dead, according to police and villagers. Independent sources said 14 people had died. However, the toll could not be verified as bodies are still buried.

Eight hours on, a proper rescue operation was yet to begin as the mine is located in an area that is inaccessible by road. Villagers, however, sprung into action and began excavating through the heavy mass but the harsh winter and rain hampered their progress. Problems were compounded because the district administration did not own earth-moving machinery.

The owners were identified as Younas Shah and Saeed Shah. Villagers said the mine is about 70 feet deep.

“About 13 people were having lunch at the mouth of the mine when it caved in and they were buried alive,” villager Shaukat Khan told The Express Tribune by phone. He said the mine owners also excavated phosphate alongside workers despite not lacking proper training.

Imtiaz Hussain, Abbottabad district coordination officer, confirmed that 11 mine workers have died. He said they were working on a private mine which was not managed by the mineral department.

Hussain said that he had sought assistance from local military authorities and the provincial government to send in Rescue 1122 personnel. The mine, he said, is located two kilometres away from metalled road network.

Police sources, however, said they will launch a rescue operation on Thursday morning.

Thanks KM for the map link 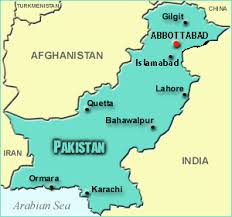