Videos of San francisco fireball which Jorge posted above;

The American Meteor Society (AMS) reports online that a meteor arced through the sky shortly after 6:30 p.m. on Wednesday, causing surprise and awe across broad reaches of Northern California. The "fireball" was visible only briefly, but was so bright that it was easily seen from light-polluted cities, as well as rural areas.

The AMS maintains on online bulletin board where people can report what they've seen in the sky. Here is a sample of comments made Wednesday evening:

Michelle Penick of San Pablo: "The colors were blue and white. It was so bright that the homes and trees were lit up. After the flashing, it began to break up. It was close enough I was able to see it breaking up and burning a fiery red."

Max Wilson of Sonoma: "I was looking at the ground, when there was what seemed to be a prolonged flash from a camera. (One of those very bright, professional ones.) I looked up to the sky to see a bright light, which kept getting brighte rand brighter. I realized it was moving, but didn't seem to going all that fast. before I knew it, it had travelled across the entire sky, with a trail that must have been (at least) 100 miles long."

Aguilar De of San Jose: "I've never witnessed anything so spectacular in m y life! The fragmentation was bright red, and broke apart into 8 or 9 distinct pieces that seemed to rain downward. The train was a very bright yellow/white streak, that continued to glow even after the meteor broke apart."

Derek Trusedale of San Jose: "I was walking the other way on a city street with street lights. The fireball was bright enough that it made me turn around to see what was causing the flash behind me. It looked like someone had sent off a nearby horizontal bottle rocket. no boom. very pretty. I suspect I'll never see anything like that again in my life."

BAY AREA FIREBALL: Last night, Oct. 17th, many people near San Francisco saw a slow-moving fireball exploding in the sky around 07:45 pm PDT. Witnesses report bright flashes of light and sonic booms that shook houses. Using a wide-field camera, Wes Jones caught the meteor disappearing behind the trees in the city of Belmont 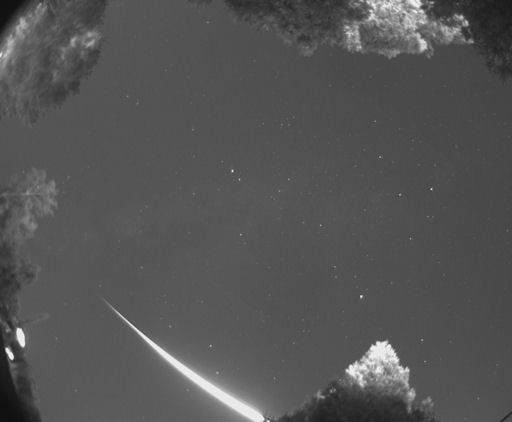 "We don't know yet if the end point [of the meteor's flight] was over land or water," says meteor expert Peter Jenniskens of the NASA Ames Research Center. Jenniskens operates a network of Cameras for All-sky Meteor Surveillance (CAMS) near the Bay Area. "Data from the CAMS system should give us an answer [about landfall]. We're analyzing the data now." Stay tuned.

Note: Although Earth is nearing a stream of debris from Halley's Comet, source of the Orionid meteor shower, this fireball was probably not an Orionid. The timing and direction of the meteor do not seem to match the Orionids.

Several witnesses report seeing a fireball streak across the sky in the Washington, D.C. region.

“I was walking to Alliance Francaise from the Zoo metro stop around 7 p.m. last night, and I saw a white light in the sky zip past overhead, and then go out with a small boom while still traversing the sky,”

“Saw a VERY large shooting star around 7:15 p.m. near Centreville High School looking northeast.. not one of your average ones either, it was orangish red in color and lasted a bit more than your average blink of an eye shooting star..”

Marth Widra out of Glen Burnie, Md says she saw “an object that had a reddish fire-like ball with a yellow/orange tail.”

Keith Cross in Hughesville, Md. says it had “almost exactly the look of a very large firework but was moving incredibly fast and completely silent till it burnt out”. Cross added: “it was the brightest object I’ve ever seen flying across the sky”

Another Asteroid Buzzes Past Earth Shortly After Its Discovery (Oct 12) - Nigel Booth spotted what he believes was a meteor burning up over Grantham last night.

Nigel and his wife Debbie, of East Street, saw the round orange and blue light moving across the sky for almost three minutes - before it disappeared.

Nigel told granthampeople: "The sky was really clear so we went for a walk along our street, which doesn't have lights, shortly after 9.30pm.

"We were facing north and saw a largish, slow-moving, orange and blue coloured light at about a 60 degree angle from the earth.

"We watched if for between two and three minutes moving across the sky from the west to east, and then it faded out.

"It was really easy to see with the naked eye.

"It wasn't a comet, as it didn't have a tail, and it's unlikely to have been a satellite falling to earth or it would be all over the national news.

"I reckon it was a meteor."

Nigel, who has been an amateur astronomer for more than 30 years, has seen meteors before - but they were only brief sightings and 'very high' in the night sky.

Notable quote: “Near-Earth objects have been whizzing past us lately, undetected until they have been practically on top of us,” said Bob Berman, Slooh commentator and Astronomy Magazine writer.

A meteor has exploded above Wales causing a sonic boom which shook windows and set off car alarms.

The Frenchtown resident and his wife, Maria, were driving to the Clinton park-and-ride lot shortly before 6 a.m. when, after passing the Clinton A&P supermarket, he saw a green-tinged white ball of light burst across the sky in an easterly direction.

The flash, which lasted between four and six seconds, was as bright as a full moon, he said.

"If you were outside, you were going to see this," he said.

Sarabia wasn't alone. Witnesses as far north as New Hampshire and as far south as Delaware said they saw the fireball, a brighter-than-usual meteor, according to logs on American Meteor Society and Latest Worldwide Meteor/Meteorite News.

"I didn't see anything falling off of it or smoke," Sarabia said, adding that it was three times larger than the North Star.

Fireball Seen Across US and Southern Canada (June 14) -

The night sky lit up with what appears to be a meteor, Thursday.

But it wasn't just a sight for local (Toronto) eyes, the meteor could be seen in Michigan, Chicago, Ottawa, Huntsville and as far as Nevada and Florida.

"I was driving north on 9th Line near Stouffville and I was shocked by a very bright blue/green light that, at first, seemed like it was coming in my direction. I instinctively hit the breaks and then I realized that it was a meteor. It carried on lasting for about 5 seconds and faded out but it was very intense," he explained.

A meteor streaking across the Ohio skies put on quite a show for a few brief seconds Thursday evening.

Reports began coming in just after 10 p.m. on Thursday of a bright object streaking across the sky at about 9:55 p.m.

"It was an incredible sight. It came from the south, streaked over head quickly and then within a second disappeared over Lake Erie," Kathy from Willoughby Hills, Ohio said. She described the sight as a bright white ball with a long, green tail.

Steven from Wooster, Ohio saw it too. He said he also saw "2 or 3 pieces that came off bottom and were traveling at a slower velocity."

Steven in Toronto, comments, "Never seen anything like it before. There was a main body of white streaking across the sky, (and) smaller objects near it."

"Just saw a glow over the lake, green blue in colour. (It) looked like a firework at first but we realized it wasn't." said K.J. from Sarnia, Ontario.

Margaret from Perry, Ohio exclaims, "I have seen a few fireballs in my life. Never one that was green. So cool. looked like green sparks coming off initial fireball. Fireball faded with no flash. Glowing green and white that faded to white."

The sight was also seen in Circleville, near Columbus, Ohio.

"It was going horizontal all white, then it exploded in a red- orange It was white glowing trail," said Lloyd Poling.