A brilliant ball of flame streaked across the sky above the Spanish capital Madrid, dazzling stargazers and astronomers alike. The celestial display was so bright it could be seen across the entire country.

The eye-popping moment was caught on camera by the Hita Observatory at the University of Huelva at around 11:45pm local time (2145 GMT). The object struck the atmosphere above the Villamuelas district in the province of Toledo, southwest of Madrid.

“The impact was so abrupt that the object immediately caught fire, creating a ball of flame around 100 kilometers above the Earth,” Jose Maria Madiedo of the University of Huelva told the Huffington Post. The meteor then shot towards Madrid at over 75,000 kilometers an hour before disintegrating completely at an altitude of 70 kilometers.

The Spanish Institution for the Study of Meteors and Meteorites, which tracked the fireball, classified the meteorite as a piece of a comet that was flying by Earth.

The explosion on impact was so bright that it could be viewed as far away as the southern Spanish cities of Seville, Granada and Murcia.

FIREBALL EXPLODES IN THE MORNING SKY OVER NORWAY (APRIL 3)

Tove Haveland is still exhilarated by the experience very early on Wednesday morning. While most of Norheimsund was asleep, the paperboy was out driving today's deliveries. Then she saw something in the morning sky.

- It was a little before half past five and I saw the moon in the top right corner of the eye. Then it happened: It was as if something exploded in the sky.

- Then it was just like a ball of fire fell from the sky, it fell straight down and slid slowly down. The color was the same as the moon, but it is not lit up in the same manner, says Haveland. WINNIPEG -- With her camera set to a shutter speed of eight seconds, a local woman managed to capture a spectacular meteor display.

Shannon Bileski was on the east side of Lake Winnipeg late Friday night with her astronomy club.

"We saw a bright flash with green explosions ... it was a meteor!" she wrote in an e-mail.

What is thought to have been a bright meteor, streaking across the predawn Northern Colorado sky Thursday, sparked reports from dozens of early birds who happened to view it.

Loveland resident Shawn Kraft caught it as he drove northward on U.S. 287, between Owl Canyon and Livermore, on his daily commute to Laramie where he works for the city as an information technologist.

"Here's what I could equate it with," Kraft said. "You know those little sparklers that kids waved around before they were illegal? It was like that. Green. Bright green. Really bright green, in a pitch-black sky. It took about a second or a second and a half."

The "fireball log" maintained by the American Meteor Society, an online gathering spot for amateur observers, contained nearly simultaneous reports of the same sighting -- a bright green meteor seen between 5:46 and 5:50 a.m.

The reports came from Colorado, Wyoming and Montana.

"It was good-sized," Kraft said. "It's the biggest thing I've ever seen in the sky like that."

A meteor is the name given to the light emitted by a meteoroid, a small rocky object that enters the earth's atmosphere from space, as it burns in the upper atmosphere.

A rare meteorite is a surviving fragment of a meteoroid that impacts the earth's surface. The vast majority of meteoroids vaporize in the atmosphere.

Early this morning a caller on the radio station I listen to in Denver, CO claimed to have seen a "UFO" moving very quickly with a green light. This witness account was corroborated by others who called in also. It sounded to me like another meteor.  Here's the Denver Post report: 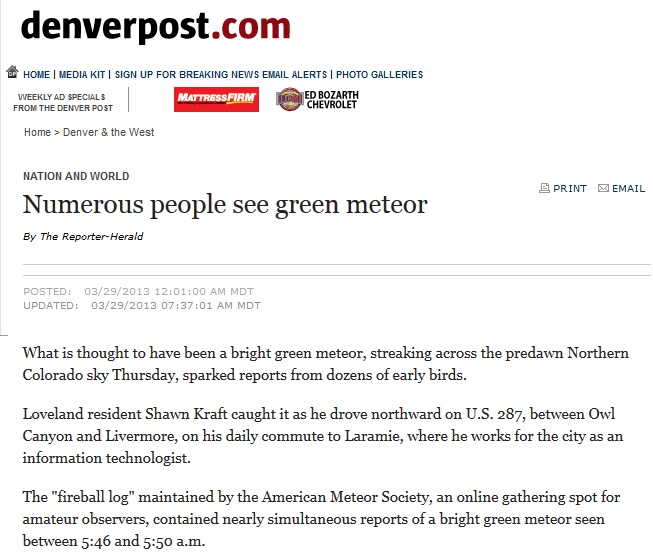 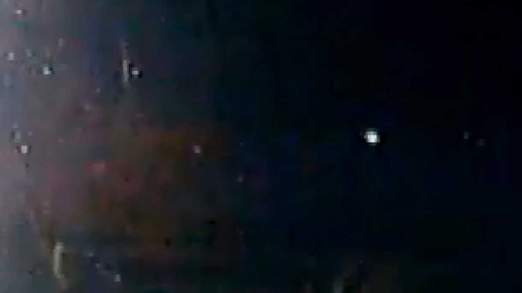 A flash of light that streaked across the sky was believed to be a large vibrant meteor seen along the US East Coast. Others describe is as fireball because of its vibrance.

NASA has said that the large vibrant meteor which shot through the US sky on Friday evening appeared to be "a single meteor event."

The meteor travelled from west to east in the northeast sky. According to NASA expert, the flash appeared to be a fireball that moved roughly toward the southeast.

A flash of light that streaked across the sky over the east coast of the United States was probably a single meteor, Nasa has announced.

"Judging from the brightness, we're dealing with something as bright as the full moon," said Bill Cooke, who works for Nasa's Meteoroid Environmental Office.

"We basically had a boulder enter the atmosphere over the northeast."

Mr Cooke said the meteor had been widely seen, with hundreds of reports on social media like Twitter as well as the website of the American Meteor Society.

The flash in the sky was spotted as far south as Florida and as far north as New England.

Eyewitness Matt Moore said he had been standing in line for a concert in Philadelphia around dusk when he saw a "brilliant flash moving across the sky at a very brisk pace ... and utterly silent".

"It was clearly high up in the atmosphere," he said. "But from the way it appeared, it looked like a plane preparing to land at the airport."

Mr Moore said the flash was visible to him for about two or three seconds, and then it was gone. He described it as having a "spherical shape and yellowish and you could tell it was burning, with the trail that it left behind".

Derrick Pitts, the chief astronomer at Philadelphia's Franklin Institute, agreed that the sightings had all the hallmarks of a "fireball".

Mr Pitts said this one got more attention because it happened on a Friday evening - and because Twitter had provided a way for people to share information on the sighting.

He said what people probably saw was one meteor - or a "space rock" - that may have been the size of a volleyball falling fairly far down into the Earth's atmosphere.

He likened it to a stone skipping across the water - getting a "nice long burn out of it."

Mr Pitts said experts could not be 100% certain of what it was, unless it actually fell to the ground and they could track its trajectory.

But he said the descriptions by so many people were "absolutely consistent" with those of a meteor.

Hundreds of people from New Jersey to Florida reported seeing a brilliant streak of light shoot across the sky Friday evening.

There were immediate reports that the fireball crashed to Earth near the Maryland-Delaware state line but those reports were unconfirmed as of 8:45 p.m.

People all over Northern Virginia have reported spotting a fireball in the sky Friday night around 8 p.m. The American Meteor Society, at the time of this writing, has over 300 pending reports of a fireball.

Twitter and Facebook users described the amazing sight. @chuckywallace wrote, "Definitely saw it in Alexandria. My wife thought it was a flare! Very bright and lasted several solid seconds. There were two flashes as it continued to break apart."

Zane P., from Alexandria, wrote, "This one lasted a lot longer than most other fireballs I've seen. I expected sound as it kept getting closer, brighter and kept exploding. It exploded twice as it streaked across the sky."

“I just happened to be facing our double glass door at the time! It was huge and bright green!!!! VERY COOL!” Kristin Davis wrote on our Facebook page.

“I thought it was a firecracker!?! It was green! What was that thing??” wrote Megan Lederman.

NASA, the FAA and the National Weather Service have yet to weigh in on the sky phenomena, but the website for the American Meteor Society had 251 reports from people in Virginia, Pennsylvania, New Jersey and Florida before 8:30 p.m.

Just saw a large beautiful meteor, duration was about 1.5 - 2.5 seconds. Very fast, travelling south to north (approx). Did not see any fragmentation, just a white bolide. There are several reports from Saturday night of a meteor gliding across the Carolina skies.

McDaniel lives in Northern Cleveland County.  In his video, the fast moving meteor moved rapidly across the sky growing bigger and bigger then fading away.

McDaniel isn’t the only one who saw the meteor; the American Meteorologist Society received 55 reports about this fireball seen over Georgia, North Carolina, South Carolina, Tennessee and Virginia.