A fireball was recorded by a webcam on the Shetland Islands (off the northern coast of Scotland) at about 7:28pm local time on January 18, 2019.

American Meteor Society received 16 reports from Michigan, Illinois, and Wisconsin about a fireball seen around 3:12am Eastern Time on January 11, 2019.

A video posted by Twitter user 'Midlo Snow Maker' shows the meteor streaking across the sky at Smith Mountain Lake in Penhook, Virginia.

8News received several other calls from viewers who witnessed the 'fireball,' which the American Meteor Society (AMS) describes as "a meteor brighter than the planet Venus."

AMS said on their website that they received over 190 reports about the fireball, which occurred around 6:35 a.m., and was seen from New York State to North Carolina.

According to AMS, the fireball ended its flight somewhere in the Atlantic Ocean, northeast of Norfolk, Virginia.

Did you see the meteor? Send 8News your photos and videos to news@wric.com.

Bright Fireball over the East Coast

The AMS has received over 450 reports so far about of a bright fireball seen above the East Coast area on January 9th, 2019 around 6:34am EST (11:34 Universal Time). The event was seen from Connecticut to South Carolina.

The preliminary 3D trajectory computed based on all the reports submitted to the AMS shows that the fireball was traveling from North-East to South-West and ended its flight somewhere in the Atlantic Ocean North East of Norfolk, VA. Based on our first analysis, it looks like the event was a fireball. A fireball is another term for a very bright meteor, generally brighter than magnitude -4, which is about the same magnitude of the planet Venus currently visible in the morning sky.

Several thousand meteors of fireball magnitude occur in the Earth’s atmosphere each day. The vast majority of these, however, occur over the oceans and uninhabited regions, and a good many are masked by daylight. Those that occur at night also stand little chance of being detected due to the relatively low numbers of persons out to notice them.

Additionally, the brighter the fireball, the more rare is the event. As a general thumb rule, there are only about 1/3 as many fireballs present for each successively brighter magnitude class, following an exponential decrease. Experienced observers can expect to see only about 1 fireball of magnitude -6 or better for every 200 hours of meteor observing, while a fireball of magnitude -4 can be expected about once every 20 hours or so.

So, if you saw this one: congrats, it’s a nice way start the year! FIRE IN THE SKY: Several cameras across Japan captured a flash in the night sky that astronomers believe was caused by a roughly 4-inch fragment of an asteroid or comet burning up when it hit the Earth’s atmosphere. https://abcn.ws/2FLyzTu

The first meteor shower of the new year will peak Thursday night as the Quadrantids dart through the January night sky, according to NASA.

The peak of the shower will unfold from the night of Friday, Jan. 3 into the early morning hours of Friday, Jan. 4. One of the benefits for stargazers is that the peak occurs during the new moon, allowing for a darker sky.

Those in the Northern Hemisphere could wind up seeing the most meteors. 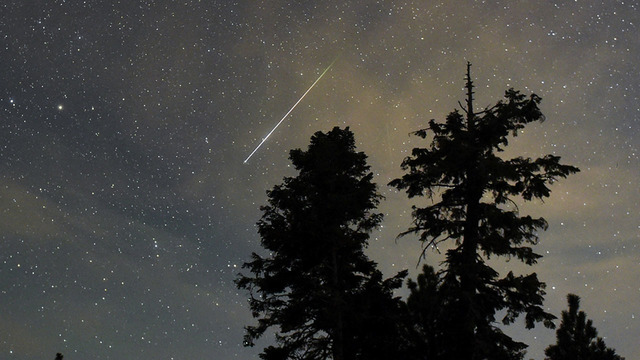 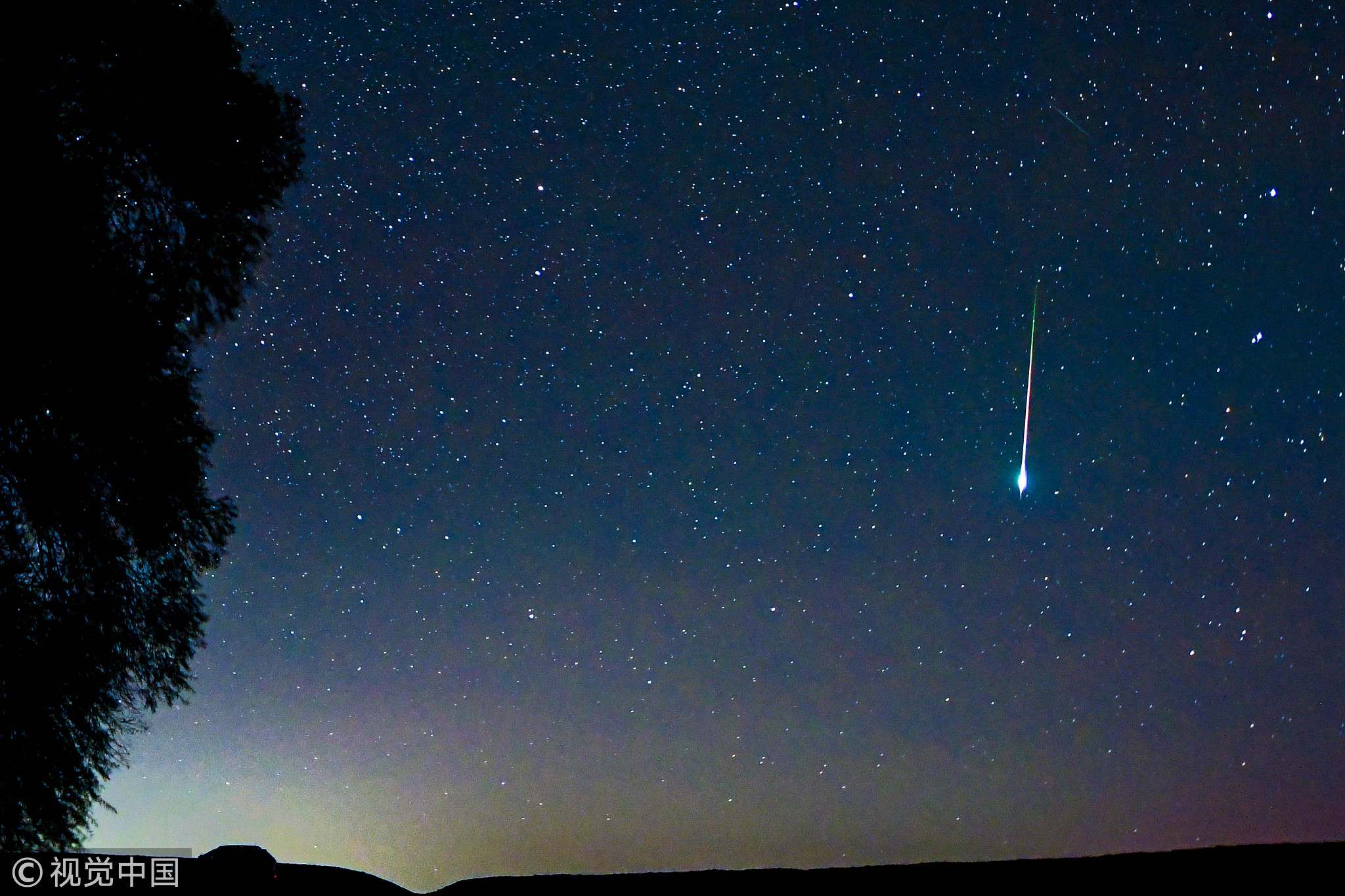 On December 13, a fire meteor of magnitude -8.1 was detected by a meteor monitoring site in Beijing.

The fireball came from this year's Geminid meteor shower. At 22:51 on December 12, the monitoring site first detected a shooting star of magnitude 1.7. Two hours later, the site observed the fire meteor of magnitude -8.1.

According to the Beijing Youth Daily, the brightness of this fire meteor is 10,000 times than that of Polaris. It's hard to see average meteors in the city, but since it was really bright, it could be observed.

From the night of December 14 to early morning of December 15 is the best time to observe the Geminid meteor shower. The volume of meteors reaches the maximum in the first half of the night, as the moonlight tapers off, observation conditions will be better.

by The Associated Press

At least a dozen people say they saw a bright fireball blazing across the night sky in New England.

More might have seen it if not for the timing. The fireball was reported shortly after midnight Wednesday

That Geminid Meteor Shower started early. Just seen a greenish fireball come flying down out of the sky. Im in Pawtucket RI

Jeff Beam of Falmouth wrote to the American Meteor Society that it was like a "slow-motion Roman candle or something."

Meteorologist Chris Legro of the National Weather Service tweeted that the fireball was "bright enough to light up the whole sky."

MORE DETAILS: This has the potential to be the best meteor shower of the year! With every year that passes, the Geminids meteor shower gets larger.

This meteor shower occurs every year as the Earth passes through debris left from the asteroid while orbiting the sun.

The 3200 Phaethon may have collided with another object in the distant past, which produced the stream of particles that hurdle across earth's atmosphere and created a meteor shower.

Described by NASA as the strongest meteor shower of the year, the Geminids are a little bit different.

The best viewing will come 2 a.m. Friday, he said.

Observers under a clear dark sky can expect to see up to 120 meteors per hour - an average of two per minute. The Geminid meteor shower will put on a dazzling display for sky watchers when it peaks on December 13

The Geminid meteor shower will peak from midnight until daybreak on 13 and 14 December. When the detritus enters the Earth's atmosphere it catches fire, offering us a glimpse of blazing pieces of space stuff which puts on a wild show at 79,000 miles per hour.

According to Space.com, the Geminids will most likely be the best meteor shower of 2018.

NASA astronomer Bill Cooke told USA Today that the Geminids used to peak at just 30 meteors per hour, but Jupiter's gravity has brought the shower closer to our planet, increasing the rate of shooting stars.

For those planning to courageous the freezing winter mornings to watch this year's final celestial show, here are some tips from experts.

As mentioned earlier, it is very easy to spot a Geminid meteor shower; it appears yellowish in colour but its arcs branch out into a pool of various colours including bright red, blue, green and white. Unless you've served as an astronaut there's a good chance the answer to that is no. But it is slated to set about 10 p.m., after which the sky should be the darkest and best time for viewing the light display.

While the Perseid meteor shower might be more popular (likely because those in the north don't have to courageous the cold to watch it), NASA calls it one of the most prolific and reliable events and Space.com said it should be the best meteor shower of the year. 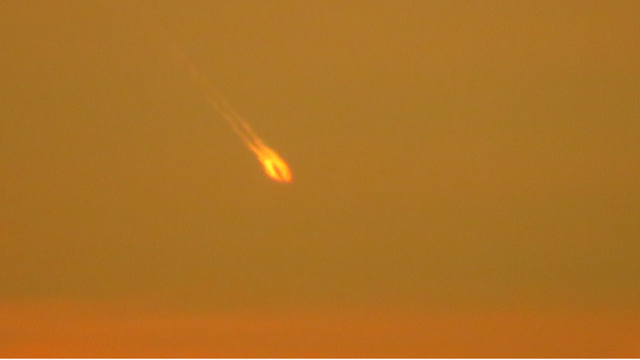 The video was filmed around 7 a.m. by Howard Gowan, of Holly Hill, who said he stepped outside to get some images of the sunrise.

“I didn’t know what the heck it was,” Gowan said.

Gowan said he was pointing his camera due south when he spotted the mysterious fireball.

The mystery in the sky, however, is not a mystery at all.

NASA officials said the fireball in the sky is a "jet contrail, illuminated by the rising sun.” The “two tails are a dead giveaway,” NASA said.

The video was filmed around 7 a.m. by Howard Gowan, of Holly Hill, who said he stepped outside to get some images of the sunrise.

“I didn’t know what the heck it was,” Gowan said.

Gowan said he was pointing his camera due south when he spotted the mysterious fireball.

The mystery in the sky, however, is not a mystery at all.

NASA officials said the fireball in the sky is a "jet contrail, illuminated by the rising sun.” The “two tails are a dead giveaway,” NASA said