Is it circulating by media this footage that may be related to the meteor event held in the florianópolis region in the late afternoon of today? 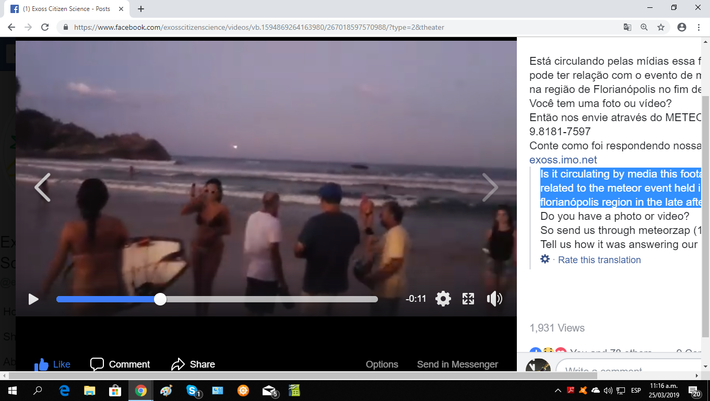 Did You See It? Fireball Lights Up Night Sky of New York

A fireball illuminated the night sky over a New York airport — and according to the American Meteor Society, dozens reported the astral sight.

The AMS shared a video on its Twitter account showing a ball of light traveling from one end of the dark, night sky to the other.

The non-profit scientific organization says the fireball was caught over Elmira Corning Regional Airport Tuesday at around 2:35 UTC.

As of Tuesday afternoon, the organization received 87 reports about this fireball which was apparently seen over the Northeast, including Connecticut, New York, New Jersey and Pennsylvania.

A fireball is a “meteor which is brighter than any planet or star,” according to AMS. A meteor? Glowing object filmed falling in Siberian sky
A shining object was captured descending from the sky on a dash cam video in Russia’s remote north. A witness claims it was a meteor, but authorities say the location of the incident is too far away to investigate
Another eyewitness told local journalists that it became “light and warm” during the incident on Friday evening near the village of Tura in the Evenk Autonomous Territory. 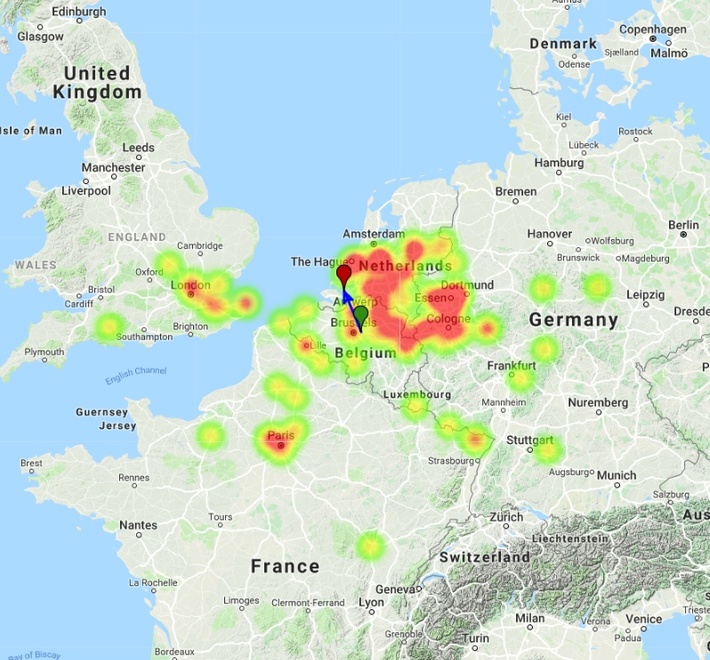 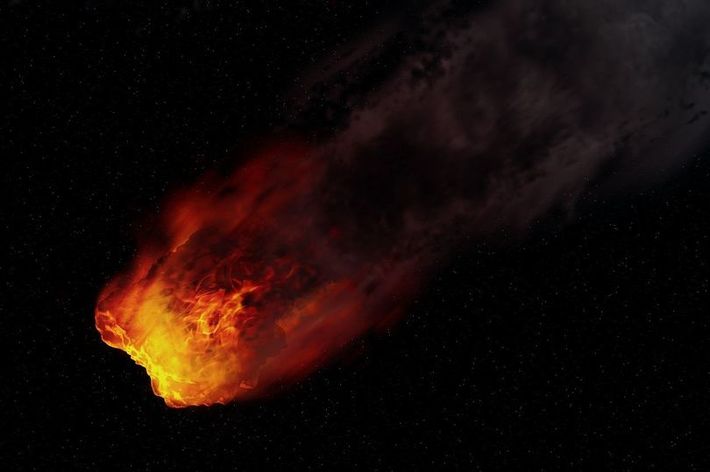 A large and mysterious fireball with ‘lots of flames coming from it’ was spotted in the skies over Cornwall.

According to reports, the unidentified object looked like a meteor and was really slow and big.

It was reported over Crackington Haven at about 10.30pm and the Kernow Weather Team (KWT) received another report of the sighting over West Cornwall at about 10.15pm.

The KWT took to their Facebook page to appeal for more information.

“We have tonight, had a report of one of our followers seeing what can only be described as a large meteor or fireball, lots of flames coming from it.

“If you saw this or even better, captured an image, get in touch we would love to hear more about what you have seen.”

Tony Bowden, who reported the body to the KWT, explained in the comments: “What I saw wasn't green, and it was in the atmosphere, and coming down with red flames from it. Possibly a small section of the comet broke off.”

Several social media users replied that they did see the phenomenon.

Annette Knight commented: “Yes, yes I saw it. Just happened to look out of the window and saw it coming down. Really slow and big.”

Sarah Myford added: “I did see something odd in the east last night around 10.30 pm (ish) driving back through Slaughterbridge near Delabole, I thought it was a firework, but it might not have been.”

Jenna Rose Tregurtha wrote: “I saw it in Crowlas looking towards St Michael’s Mount... Very bright and it was thicker than your ordinary shooting star.”

Linsey Shenton commented: “I am south east Cornwall and I saw one last night whilst outside with the dogs never seen anything like it before.”

Bright fireballs and individual meteors will become more frequent in the next few days as part of the annual “spring meteors”.

They typically grow in intensity between February and April.

But the next major meteor shower will not start until late April when the Lyrid meteors break out into the atmosphere.

Night sky lights up across Florida JACKSONVILLE, Fla - Several people watched the night sky light up from Jacksonville's Westside down to Melbourne Tuesday night. Vivian Parrish, in the Rolling Hills neighborhood of the Westside shared video from her doorbell camera of a fireball streaking across the sky.

Even though it happened at 2 a.m., Vivian was not the only one to see the dropping fireball around that time. A woman in Middleburg saw a very bright light bigger than a full moon but didn’t hear a sonic boom.

The American Meteor Society, which collects reports on fireball and meteor sightings, shows four other sightings -- from Middleburg to Palm Bay, in South Florida.

Meteoroids commonly burn up in the Earth’s atmosphere but they are not always noticed because of sunlight. Bigger space rocks may not vaporize completely in the sky before hitting the ground.

These meteorites are rare but often display an awesome streak in the sky. A rock that weighs as much as a paperclip can trigger a fireball by slamming into the atmosphere at 130,000 mph.

This was the case Feb. 1 when a meteor passed over Ft. Myers and struck western Cuba. 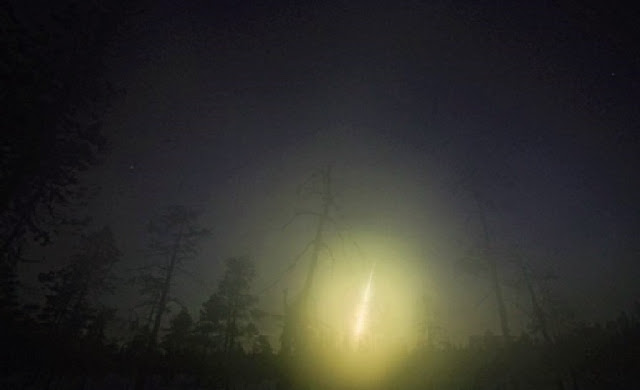 The sighting occurred on the afternoon of Tuesday in points of Galicia, Asturias, León and Cantabria.

A bolide - or cosmic stone - has been sighted on the afternoon of this Tuesday on the northern sky of Galicia, Asturias, León and Cantabria.

This was explained by the director of the Astronomical Observatory Ramón María Aller of the University of Santiago (USC), José Ángel Docobo, who said that "most likely" is that it was "a cosmic stone that entered the atmosphere". "It was observed in the north of Spain: Galicia, León, Asturias and Cantabria," he commented, adding that they estimate that "if something fell, it fell in the Cantabrian Sea".

Meteorite Soars Through the Sky Over Venezuela, starts fire on landing.  Netizens took to Twitter after what it seems to be a bright meteorite soared through the sky over Venezuela and could be seen over Valencia, Victoria and Caracas. 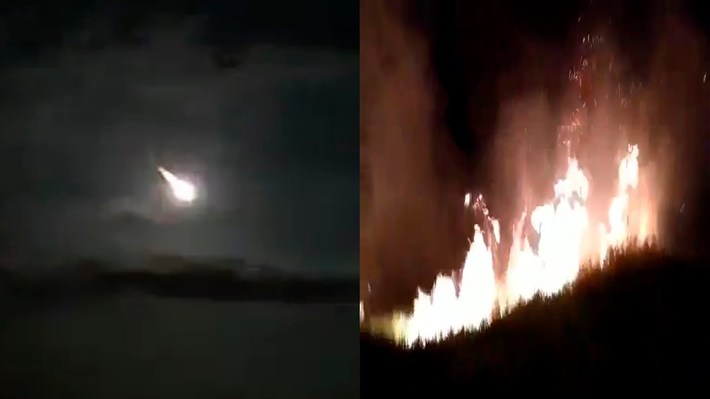 Large Meteor Cruises Over Colorado, Fireball Seen From 3 Other States

DENVER (CBS4) – Several people witnessed a large fireball traveling high in the sky over Colorado early Thursday evening. It left a smoke trail that lasted for several minutes according to reports.

A CBS4 viewer in Morrison emailed and said, “I just saw a meteor fall over the western side of town. I was looking west. It left a contrail and was big. ”

The following video was submitted to our partners at KKTV in Colorado Springs. You can see the fireball just to the left of the traffic light.

Cloudbait Observatory says the fireball occurred at 6:13 pm and was widely seen in Colorado, especially along the Front Range. It was also witnessed by people in Utah, New Mexico and Wyoming according to the American Meteor Society.

Preliminary analysis from the Cloudbait Observatory indicates the fireball was likely overhead in the area around Ridgway and Ouray, Colorado. Scientists are still working to determine more information about the path of travel where it may have landed.