Bright green fireball illuminates the sky over Illinois, US A bright green fireball illuminated the sky over Illinois and Wisconsin at 07:25 UTC (01:25 CST) on February 6, 2017. It was captured by numerous cameras.

Cameras at St. Mary Catholic High School in Neenah captured several angles of the meteor. Technology administrator Martin Suettinger says there were reports that the meteor rattled homes and knocked photos off walls.

The American Meteor Society received over 300 eyewitness reports and they are still coming in. Some of them said a loud boom and fragmentation was associated with the event.

The preliminary estimated trajectory plotted from the witness reports shows the meteor was traveling from the Southwest to Northeast ended its flight on the Lake Michigan somewhere between Sheboygan and Manitowoc, WI, the AMS said.

If you saw a bright flash in the sky around 6:16 a.m., it wasn’t lightning. It was a short trail, exploding fireball that lasted around three seconds.

Check out this still image captured by ArkansasSky.com near Greenbrier, Arkansas. They caught a big flash on their camera in the lower part of the sky between 20 and 30 degrees above the horizon.

There were several sightings in Collierville and scattered reports from Louisville, KY to Austin, TX. Check out the map to see all the sightings as of 9:30 a.m.

Fireball Over the Carolinas (Jan 25) AMS has received numerous reports of a bright fireball seen over North Carolina and South Carolina on Wednesday, January 25th 2017 around 04:15 EST (09:15 UT).

Fireball seen over Lansing and around Midwest (Jan 8)
http://www.lansingstatejournal.com/story/news/local/2017/01/11/fire...
Dave Behnke wasn't prepared for what he saw in the sky before dawn on Sunday.

Neither was his dog, Harvey, who had insisted they go outside at such an early hour to begin with.

"He started barking, looking up and going crazy," said Behnke, who lives in Lansing Township. "I said, 'what the hell?' And then he started cowering. I looked up, and I was thinking, 'did I just see something or not?'"

The object was "about the size of a VW wagon," Behnke said. It was changing colors and moving from north to south. He thought it was only about 100 feet above the trees.

What they saw was a bright meteor known as a fireball. And lots of other people saw it, too.

The American Meteor Society received 145 reports of a fireball seen over seven states and Ontario, Canada around 6:15 a.m. Sunday. Observers from all over southern Michigan, including East Lansing, Laingsburg, Charlotte and Webberville, logged sightings on the AMS website.

"I was on my way to work when I saw what I initially thought was a low flying plane behind a tree," an East Lansing resident wrote. "However, when I moved past the tree I saw the object. It was very bright and seemed to be very close."

AMS is a non-profit scientific organization founded in 1911. It recorded 3,778 fireball events in the U.S. last year, including 173 in Michigan, according to its website.

In February 2016, about 160 people reported seeing a fireball over Wisconsin and west Michigan, according to published reports. A fireball also was seen over the western part of the state on Dec. 26, 2016.

The meteor society archives fireball reports for study purposes and shares them with the public and other organizations. You can find its website at http://www.amsmeteors.org/.

Behnke said he was glad to hear that other people saw the fireball on Sunday morning, too. His dog hasn't been the same since, he said.

"Harvey, he was upset for the next couple of days," he said. "He's been traumatized."

Meteorite burns up over north Russia

"Yes, indeed, a meteorite burnt up in the dense layers of the atmosphere in the Arkhangelsk Region in the evening of January 8. It did not reach the Earth. Eye-witnesses saw a flash in the sky," the emergencies services said. 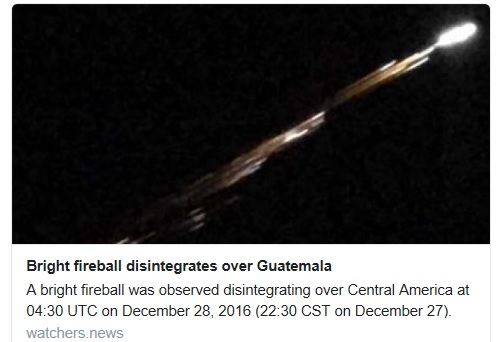 Eyewitnesses said it flew across the sky from south to west as it disintegrated.

The event took place at around 10.30 pm local time, and brought hundreds of people out on the streets to watch.

In the sky above the Murmansk region, Russia a meteor exploded

18 December, 2016. The meteorite, according to preliminary data, burned in the dense layers of the atmosphere above the Murmansk region. Video recording with a bright flash avtoregistratora published witnesses.

According to eyewitnesses, the phenomenon was recorded on Saturday night near the village of Tuloma, located 30 kilometers from Murmansk.

FlashNord source in the regional emergencies department said that the information about the devastation on the ground and injuries were reported, at the power did not occur there had been no incidents.

Get comment at the Pulkovo Observatory FlashNord agency has not yet succeeded.

In April, 2014 in the skies over Murmansk it was also recorded outbreak of the explosion of a meteorite. Source: flashnord.com

17 December, 2016. Director of the Omsk planetarium Vladimir Krupko confirmed that Omsk managed to shoot it a bright meteor.
On Saturday, December 17 at the social networking came with the video recorder Omsk Denis Bubnov, which caused a wide public resonance. The footage shows that the fireball appears in the sky, which went on a tangent and extinguished. Frame Author explained that the entry was made this morning when the young man was driving down the road in the Gorky region.
Some commentators agree with the author that it is a meteorite. Others have suggested that there was a shooting star, a very big sky in Omsk. Thirdly generally assumed that someone ran sky lanterns. Clarity has made a major star in the academic area. As commented "NGS.Omsk" Omsk planetarium director Vladimir Krupko, the driver took a flight bright meteor.
"Bright meteors often fall, especially now Geminids meteor shower is still valid", - said Krupko edition. Also, the scientist added that meteors light up at an altitude of 120 km above the surface of the Earth, and go out usually at a height of 80 km. Source: omskregion.info

Numerous users of social networks have reported how a ball of fire ran through the skies of Colombia at 6:25pm local time Friday night.

There have also been reports of a similar sighting from the Venezuelan state of Apure.

+++Probable meteorite fall in Spain last night+++
A very bright fireball appeared over Spain last night, December 11, 2016 at 22:25 local time (21:25 UTC). This video was captured and compiled by the meteoroid research group at Huelva University, Spain. Coincidentally, this fireball is not a member of the Geminid meteor shower which is currently active and will be peaking in two nights, but a piece of an asteroid from the main asteroid belt. Preliminary calculations indicate it may have produced meteorites! Video: Meteoroides.net - click on their site to see many more bright meteors and fireballs they have captured (Y) 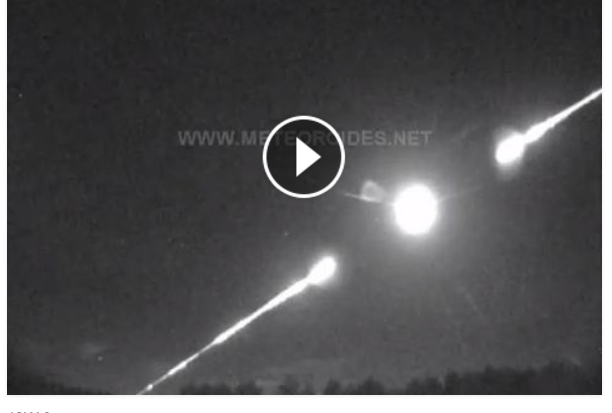