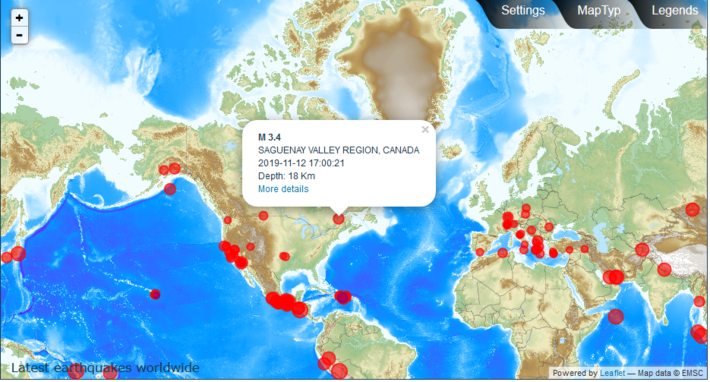 5.4 magnitude earthquake in the region of Montélimar between Drôme and Ardèche. Injuried people
November 11, 2019

The Prefecture of Ardeche announces 3 light wounded, in a first assessment.

The earthquake reevaluated up to 5.7 on Richter according to National Seismic Monitoring Network based in Strasbourg. France-Séisme keeps its value of 5.4

A strong magnitude 5.4 earthquake on the Richter scale has just shaken the region of Montélimar, between Drôme and Ardèche. It was 11:52 local.

The epicenter is located 1 km from Malataverne, near Montélimar, in the Drôme.

According to the prefecture of the Drôme, a scaffold collapsed in Montélimar. A worker was injured. A woman panicked, still in Montelimar, was taken care of by firefighters.

Following the appearance of cracks, two buildings were evacuated in Montélimar, the Cabiac Tower, and in the Nocaze district.

Heavily affected buildings in Teil (Ardèche) where evacuations are in progress, announces the Prefecture, via Twitter.

Earthquake, one new shock of magnitude 3.5 was registered in the province of'Eagle at 00.19. Same epicenter of the 18.35 earthquake of magnitude 4.4: a few kilometers south-east of Balsorano, al border between Lazio and Abruzzo. Three in all the replies after the first shock, the first two in a close sequence at 10.39 pm and 10.40 pm, of magnitude 2.6 and 2.3 respectively. The depth is between 11 and 14 km. Other municipalities near the epicenter are Sora and Pescosolido.
IN DEPTH

The 18.35 earthquake was clearly felt also in Rome, even in the central districts, but above all in the lower Lazio from Frosinone to Cassino and Sora. The shock it was also felt in several municipalities in the northern area of ​​the province of Naples

About 30 small earthquakes (all less than magnitude 3) had preceded the strongest shock. Fifteen replicas in the next hour (the largest in magnitude 2.2).