GREEN TOWNSHIP — The tiny village of Wandin was rattled Wednesday morning by the derailment of a northbound train loaded with coal and the collapse of a trestle over Wandin Road.

A spokesman at the Nicholasville, Ky., headquarters of RJ Corman Railroad Company, the owner of the rail line, said the cause of the accident was under investigation and the bridge was not thought to be responsible.

“Based on early indications, we do not believe at this time that the bridge failed,” said Todd Bivins. “But after that … I cannot say whether it was a track cause, or an equipment cause. That’s under investigation.”


Four cars of 64 in the train jumped the track: 36 had safely crossed and 24 others sat on the rails on the approach to the trestle along Starford Road, according to Assistant Chief James Hopkins III of the Commodore Volunteer Fire Department.

Tons of coal spilled into the woods on both sides of Wandin Road but appeared to pose no environmental danger or threaten any waterways.

No one was injured.

Townspeople congregated near the collapsed bridge with cell phones and cameras, mingled among the first responders and railroad workers, and clambered through heavy brush to cross the tracks and get a gander at both sides of the ruined bridge.


“We were told someone had just driven through a moment earlier,” Hopkins said.

The train had been loaded with coal mined near Clymer and was bound for an interchange point near Clearfield, where Norfolk Southern Railroad would have taken the hopper cars to another destination, Bivins told the Gazette.

State police troopers investigated at the scene the mishap and worked with Commodore firefighters to detour traffic away from the fallen trestle. The bridge crossed Wandin Road less than 100 yards south of Starford Road.

“Certainly it’s a holiday, but we’re going to work to get this thing all cleaned up as soon as we can, today and tomorrow,” Bivins said. Wandin Road would be reopened “as soon as possible.” 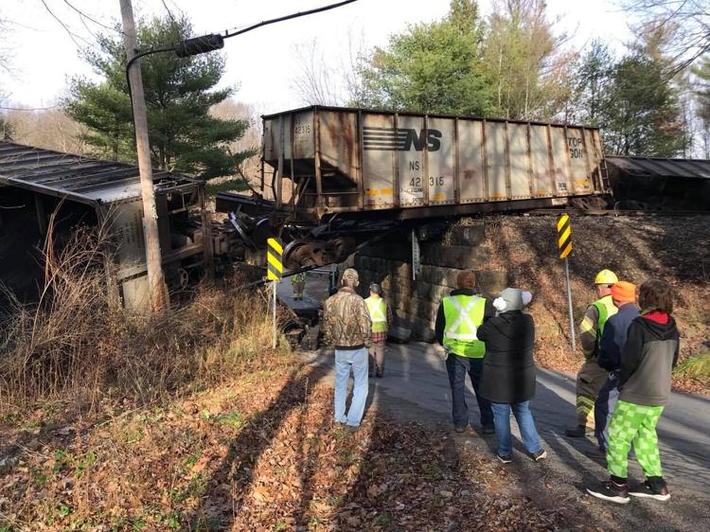 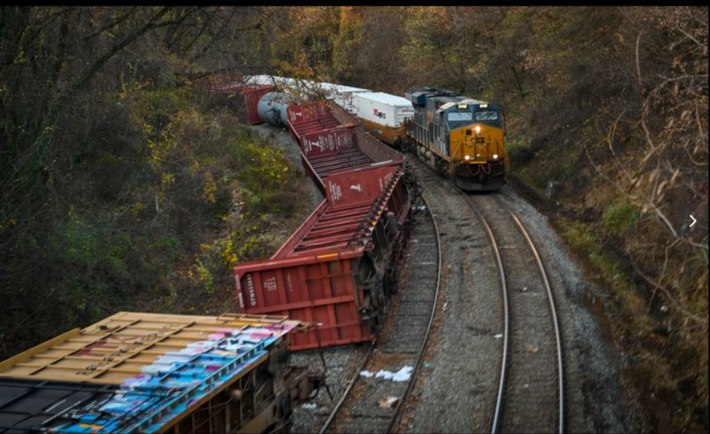 A 21-car freight train derailment near Sisson and West 24th streets in North Baltimore was cleared from the tracks about 5 a.m. Tuesday, and train service resumed within the hour, according to CSX Transportation, the railroad company.

The derailment happened as the 109-car train was passing through Baltimore about 6:30 p.m. Monday on its way to Philadelphia from Avon, Indiana, a company official said.

No hazardous materials were involved, and there were no injuries to the train crew or the public, according to Cindy Schild, director of media relations and public affairs for the Jacksonville, Florida-based railroad.

The derailed cars were either empty or carrying pulpwood or sand, said Schild, who added that CSX is working closely with and appreciates the quick response by Baltimore fire and police departments as well as the Maryland Department of Transportation.

“The safety of the community and everyone on site is our top priority as we develop a recovery plan,” Schild said.

Another CSX freight train derailed nearby in 2019. It was traveling north on elevated tracks near the North Avenue bridge when several cars derailed, plunging onto Falls Road. No one was injured, but one person’s vehicle was nearly struck by a toppled light pole.

At times Monday night, small groups of bystanders peered over the railings on the Sisson Street bridge to the tilted train cars below. From there, the train cars stretched out of sight into the darkness. 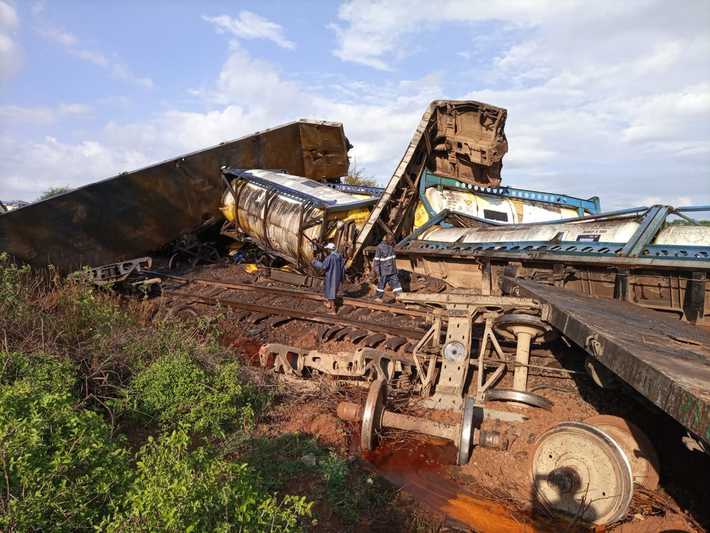 A Cargo train heading to Nairobi from Mombasa has derailed at the Kambu area on the old metre gauge.

Witnesses said the trail had stalled at Kalimani before rolling back at a high speed, ripping off the rails.

A considerable amount of oil spilled in the area after the accident although no fatalities or injuries had been reported at the time of going to the press. 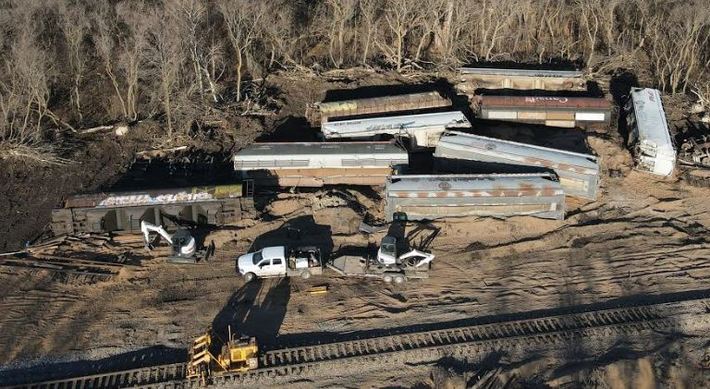 Repairs were completed and the tracks were reopened Saturday. Crews had to build a road to the area that had to be cleared where the cars are stacked so equipment could be brought in to remove the grain. That work is still underway.

There’s no word on what caused the derailment. ATLANTA — Authorities are investigating what preceded a train derailment Sunday night that sent one person to the hospital.

It happened in the 2900 block of Parrott Avenue NW, near the Riverside neighborhood, according to Atlanta Police. That's near the Chattahoochee River, just inside Interstate 285.

Police said they initially got a call of a traffic accident in the area, but the call was later changed to that of a rescue.

While the details of that rescue are unclear, Atlanta Police confirmed that one person was taken to the hospital. They were reportedly stable.

The train, operated by Norfolk Southern, derailed at around 8 p.m., according to the company. The company said members of its team are still gathering information from the field as to what happened exactly to cause the train to derail.

Neither the contents of the train nor its destination were available at this time.

The art sculpture is coincidentally titled "Saved the Whale's Tail" 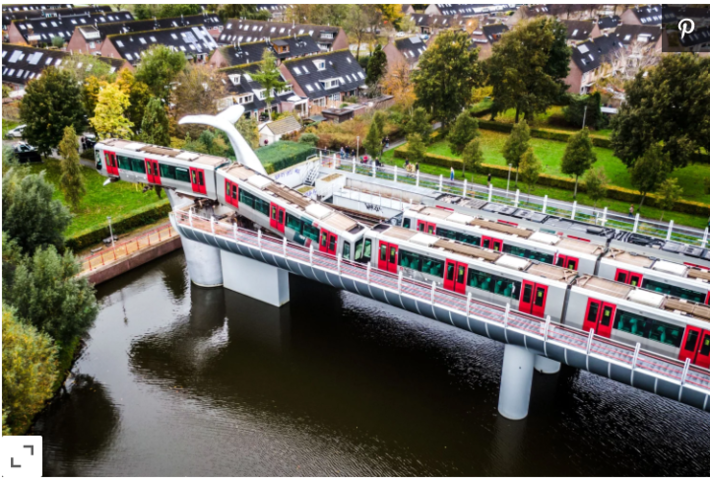 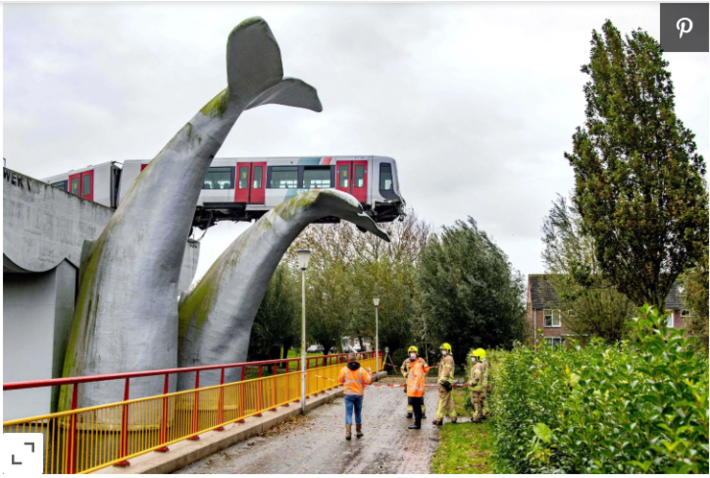 It’s a whale of a tale involving the tail of a whale — and it likely saved a train conductor’s life.

The front carriage of an elevated metro train slammed past the end of a railway in the Netherlands on Monday, only avoiding a 32-foot drop onto the ground after it became nestled atop an art sculpture featuring the tail fin of a whale, according to reports.

The driver of the train was not injured, and there were no passengers on board when it plowed through stop barriers at the end of the station in the town of Spijkenisse, the Associated Press reported.

The incident occurred near the port city of Rotterdam, and a spokeswoman for the local security authority told the AP that a team of experts was working to get it down safely.

“It’s tricky,” Carly Gorter told the outlet of removing the carriage, which remained suspended above a bike lane on top of the tail fins.

Coincidentally enough, the sculpture, made of reinforced polyester and put up in 2002, is called “Saved by the Whale’s Tail,” according to the Guardian.

“I’m surprised it’s so strong,” Maarten Struijs, the architect who designed the sculpture, reportedly told Dutch broadcaster RTL. “If plastic has been standing for 20 years, you don’t expect it to hold a metro carriage.”

“Of course it does look rather poetic,” Struijs reportedly added to the Algemeen Dagblad newspaper. “But it’s really lucky that the tail can bear the weight of the train.”

An investigation into how the incident occurred is ongoing, according to the AP. 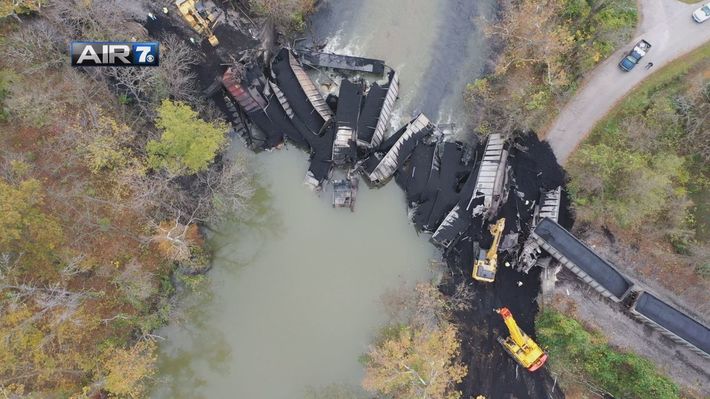 Roanoke County released a statement Saturday that further details the response to the incident:

"The Virginia Department of Emergency Management (VDEM) and Virginia Department of Environmental Quality (DEQ) responded to the initial incident and have been coordinating with NSC on the removal of the rail cars and coal from the Roanoke River. Any environmental impacts from the coal are expected to be largely physical in nature. However, DEQ is coordinating with local, state and federal agencies and Norfolk Southern to collect samples to determine whether there have been any impacts to water quality.

The Virginia Department of Health (VDH) is working closely with the City of Salem Water Treatment Plant to ensure drinking water service is not disrupted. Out of an abundance of caution, Salem is currently withdrawing water from groundwater wells and not the Roanoke River until the water samples from the river can be collected and analyzed. The City has sufficient back-up water resources and no disruptions to service are anticipated.

The Emergency Managers from Roanoke County and the City of Salem are also working with Norfolk Southern to ensure the safety of citizens as response efforts continue."

UPDATE: Norfolk Southern says 26 rail cars were on their way to Norfolk from Weller, carrying coal. No hazardous substances were a part of the derailment.

The cause of the incident is still being looked into.

EARLIER: A train derailed along Barley Drive overnight near the Roanoke County-Salem City line, according to Roanoke County emergency officials.

Norfolk Southern and contractor crews are on scene. A hazmat crew has come and gone.

The train seems to have been carrying coal.

This story is still developing.

Train derailment over I-94 damages bridge, shuts down freeway in Dearborn 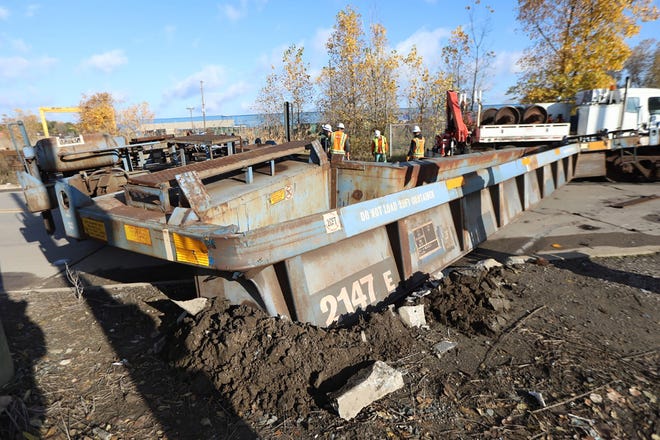 A portion of Interstate 94 in Dearborn briefly shut down Wednesday morning after a train car derailed over the highway.

Michigan State Police troopers arrived at the scene around 5:45 a.m. and saw a train car hanging over the exit lanes to Michigan and Wyoming avenues. The train car destroyed part of the bridge, MSP said.

Only the eastbound I-94 exit ramp to Michigan and Wyoming is closed as of 10:30 a.m. The rest of the freeway is open.

The railroad company, CSX, said it will take several hours before it can correct the issue, according to MSP. Once CSX begins work, I-94 in both directions in the area will close.

"The cause of the derailment is under investigation," a CSX spokesperson said in an email to the Free Press. "CSX personnel are on site and are coordinating with the local authorities as we work to swiftly and safely remove the derailed cars." 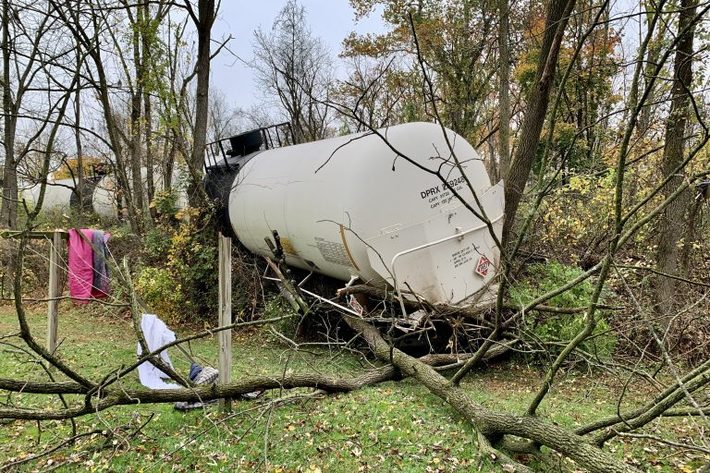 Kellee Younker of Centre Township was having a normal day Monday afternoon when she left her house to pick her daughter up from school. Arriving back home on Railroad Road, she noticed something odd behind her house. An oil tanker car crashed into her backyard.

Younker is used to seeing train cars across her backyard, but this was different. “After getting the mail and pulling into the driveway, something looked funny. I was shocked to see it was in out yard” she said.

Reading Blue Mountain and Northern Railroad, the company who owns the tracks, routinely stores tanker cars on the tracks.

The tanker cars detailed from a track siding, which splits from the main track near Main Street in Mohrsville. The siding ends abruptly just before Bellemans Church Road on a small bridge over Irish Creek.

Younker says she usually sees railroad crews monitoring the rear of the tanker cars when they are placed on the siding. “I see them time to time on their walkie-talkies backing up the cars, so I’m not sure what happened today.”

Falling down an embankment, the rail cars broke Younker’s clothes line and a few trees. Overall, she feels thankful that there was not more damage.

”It doesn’t bother me that the railroad is here, but it’s kinda like my worst nightmare that a train is going to run into my yard. It’s a little shocking, but it’s not as bad as it could be.”

No injuries were immediately reported. Initial reports indicate the rail cars were empty. The cause of the derailment is still under investigation. Further details will be provided when available. Overhead map of the end of the track just behind the house.