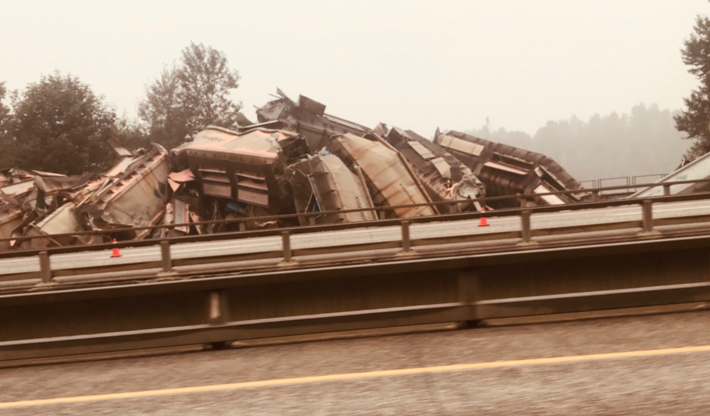 It doesn’t look like anyone’s been hurt in the derailment, and CN says there are also no reports of fires or dangerous goods involved.

“CN would like to apologize for the inconvenience caused by this incident and thanks the first responders present at the scene,” the company says in an email to NEWS 1130.

It’s still unclear what caused the train to derail.

Witnesses tells NEWS 1130 they saw a large police presence while driving past the derailment Monday.

“There’s a massive train wreck, like piled up train cars,” one commuter describes. “I mean, it’s a s*** show. We were shocked.”

The derailment is not impacting traffic but is a visual distraction to anyone driving west of Hope by the Hunter Creek exit on Highway 1. 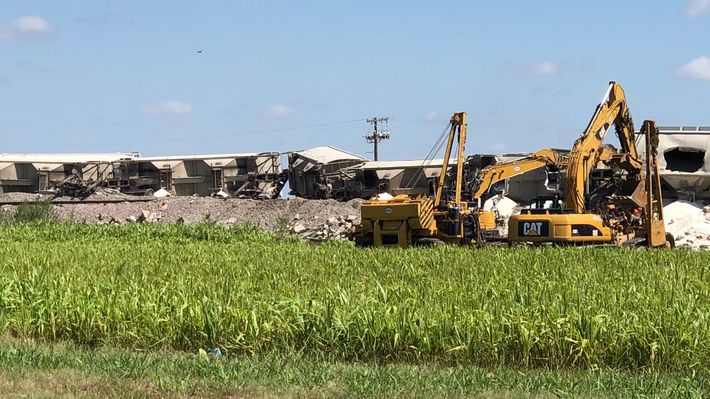 TEMPLE, Texas (KWTX) - A train derailment early Sunday morning in eastern Bell County at the intersection of U.S. 190 and Prichard Road led to the closure of the intersection, which was blocked by the train.

The Bell County Sheriff’s Office is at the scene the train derailment east of Temple.

Deputies at the scene reported 27 train cars left the track.

All train cars were carrying sand and no hazardous materials are involved, deputies said.

The intersection of U.S. 190 and Prichard Road will remain closed until officials from BNSF Railroad arrive at the scene to investigate and begin the cleanup. 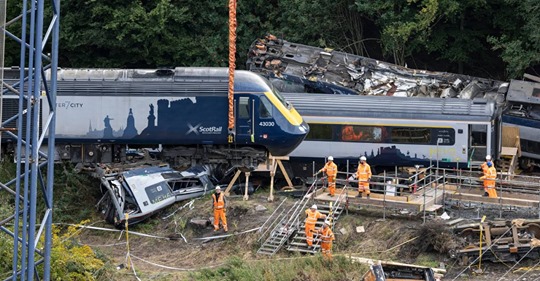 An investigation into a train crash in northeastern Scotland last month that killed three people has found that the train struck a pile of washed-out rock and gravel before derailing, according to an interim report released Thursday.

The driver, a conductor and a passenger died when the ScotRail train came off the tracks near the coastal town of Stonehaven on August 12. The first of the derailed carriages is expected to be removed from the site on Thursday.

Investigators said “a significant contributing factor” to the derailment was heavy rainfall washing material from adjoining slopes, or earthworks, onto the tracks.

Network Rail, which is government-owned and responsible for the UK’s train tracks, set out plans in the report on how to reduce the risk of such landslips but acknowledged it cannot afford to strengthen all “substandard” track-side slopes.

We are all aware that we are increasingly seeing more incidents of severe weather and, as the report published today shows, earthworks and drainage infrastructure – some of which are more than 150 years old – prove to be a real challenge as the country experiences more heavy rainfall and flooding," Network Rail chief executive Andrew Haines said.

Rail traffic on the Mathura-Delhi route was disrupted as four wagons of a goods train derailed between Vrindaban Road and Ajhai railway stations here on Sunday, officials said.
According to Northern Central Railway’s Agra Divisional Commercial Manager (DCM) S K Srivastav, the Ghaziabad-bound train was coming from Chhattisgarh’s Bhilai and its wagons derailed around 10 am. The DCM said it will take four to five hours to clear the rail line.

Meanwhile, passenger trains have been diverted to the Aligarh route, he said

Iron bar-laden wagons have also disturbed an overhead electrification line as a few polls were damaged due to the impact, he added

North Central Railway’s Chief Public Relations Officer Ajit Kumar said at this state, it is difficult to tell the cause of the incident.

He said an inquiry will be conducted by railway officials to ascertain the reason behind it. The official said an operation to clear the rail line is under way under the guidance of senior officers of the department.

I'm having a problem loading pictures so sorry about that.

LONDON (AP) — About 300 people in Wales had to be evacuated after a freight train carrying large amounts of diesel caught fire and derailed, British Transport Police said Thursday.

Officials said two employees onboard managed to raise the alarm and escaped without injury. The fire near Llanelli, in south Wales, was reported close to midnight Wednesday. Three of the train’s cars were still ablaze Thursday afternoon and people were asked to steer clear of the area while firefighters battled the blaze.

Police declared a major incident and asked hundreds of people to move to a nearby school and community center because there was still a “substantial risk” within the immediate area.

“What we know is a freight train, carrying large amounts of diesel oil, caught fire and a number of its carriages also derailed,” Supt. Andy Morgan said. “Thankfully, despite the clear danger, no injuries have been reported.”

“The fire was significant due to the quantity of fuel it was carrying and presented a possible danger to the wider community,” he added.

Authorities were investigating what caused the derailment and resulting fire.

We spoke with multiple residents in the area and they confirmed that the trains were not like this prior to the storm.

The trains were located between Lake Charles & Cameron where the storm was at its strongest. 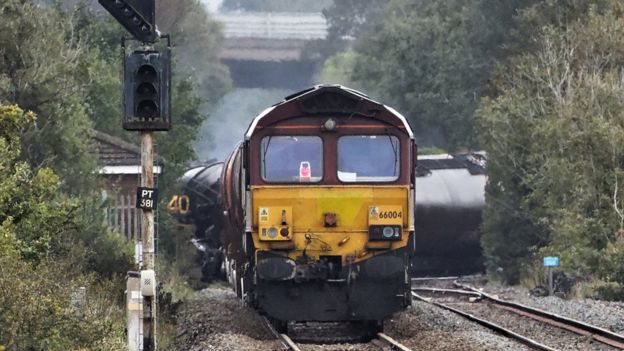 A freight train carrying diesel has derailed and burst into flames, with fuel spilling into a nearby river.

About 300 people were evacuated from their homes in Llangennech, near Llanelli in Carmarthenshire, during the "major incident" on Wednesday night.

Natural Resources Wales said it was not safe to try and contain a diesel spill which had gone into the River Loughor.

A driver and engineer, onboard the train, were not injured and are being supported, owners DB Cargo UK said.

Dyfed-Powys Police said the driver had noticed something was wrong with the train, which was travelling from Milford Haven. It then derailed and the fire started.

The blaze was reported at about 23:20 BST on Wednesday and police said it had been declared a "major incident" due to the "initial risk of harm" to people nearby.

People living within 800m of the fire described seeing "plumes of smoke" and seeing flames from the tracks, when they were evacuated from their homes. They have since been allowed back.

The Rail Accident Investigation Branch (RAIB) said it was carrying out a preliminary examination and gathering evidence.

Puma Energy confirmed the third party-operated train was carrying its fuel from Milford Haven, in Pembrokeshire, to Theale, near Reading, when three tanks caught fire.

"Our immediate priority is to work with the emergency services, Network Rail, environmental agencies and the train operator to ensure public safety is maintained and any possible environmental impacts are mitigated," a spokesman said.

Puma Energy has not yet confirmed how much fuel the train was carrying, or how much caught fire.

The site of the derailment is close to the Loughor Estuary, which is part of the Carmarthen Bay and Estuaries Special Area of Conservation.

Natural Resources Wales said it was "clear some of the diesel is already making its way into the nearby River Loughor".

But Aneurin Cox, duty incident manager for Natural Resources Wales, said it was "not currently safe" for workers to get close enough to try and contain the spill while the fire was burning.

"Once it's safe to do so, we will work with our partners to fully assess the environmental impact and advise Network Rail when the clean-up of the site can begin," he said.

"We will also be keeping local angling and cockling groups informed of the latest situation."

The cockle beds in the Burry Inlet - worked by 35 licensed pickers - have been closed following the diesel spill.

Robert Griffiths, secretary of the Burry Inlet Handgatherers Association, said he had been contacted by fisheries officers following a meeting of a number of agencies which monitor the beds.

Mr Griffiths said the extent of any diesel pollution was still being assessed and it was hoped the closure would last only a few days.

'Black, black clouds of smoke in the air'

Louise Perkins, who lives close to the railway line, said she grabbed some stuff and rushed from her home with her children, aged seven, 12 and 19, in the middle of the night.

The 38-year-old was up late watching TV when she heard an enormous bang: "There was this massive fire and black smoke.

"As we left it was just fire - you could see like balls of it puffing up, and the smell... the smell of diesel.

"It was just everywhere, and there were just black, black clouds of smoke in the air." continues... 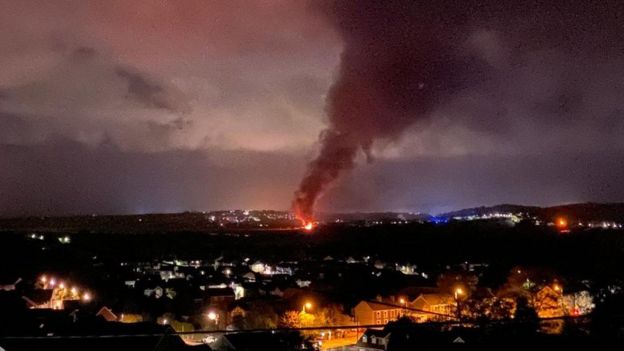 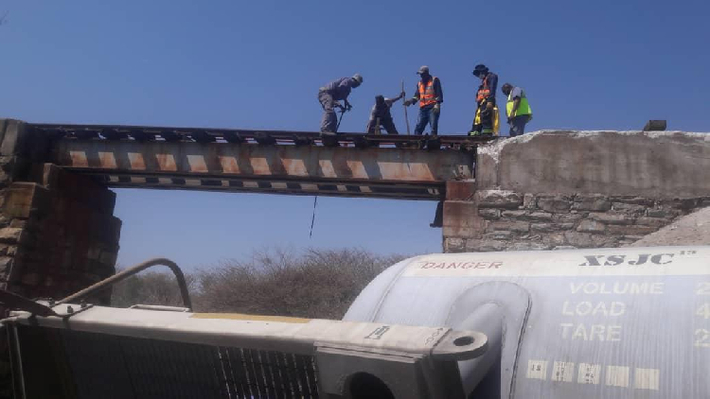 A TANKER with Sulphuric Acid derailed between Kransburg and Usakos and spilled the acid which damaged train tracks on Monday.

The derailed tanker was part of a 21-wagon train that was transporting the corrosive sulphuric acid from Tsumeb to Arandis.

“A derailment of a sulphuric acid tanker occurred during the early morning hours of 24 August 2020 at approximately 00h30,” corporate communications manager Abigail Raubenheimer said in a statement on Tuesday

She said the derailed tanker spilt the acid but TransNamib's emergency response plan was activated immediately and the spillage was contained.

No injuries occurred but four metres of rail tracks were damaged and repair work was initiated.

“TransNamib expects the repairs to be finalised today and for operations to continue. We apologise to our customers for the inconvenience caused,” Raubenheimer said The cleanup continues after a Norfolk Southern train derailment in Washington County, Tennessee.

It happened late Sunday night in the Telford area of the county.

A total of ten cars jumped the track.

According to the company, no injuries were reported and no hazardous materials were spilled.

The mixed-freight train was en route from Chattanooga to Roanoke, Virginia at the time.

A cause of derailment is under investigation.

According to officials, 10 cars derailed near Rauhof Road. That's near the Telford and Limestone communities.

No hazardous material was released and no injuries have been reported.

Several roads in the area are currently impacted and will remain so until cleanup is complete.

Those include Matthews Mill, Rauhof Road and Washington College Station.

Crews from Norfolk Southern Railway will be on scene Monday morning to begin clearing the derailed cars. 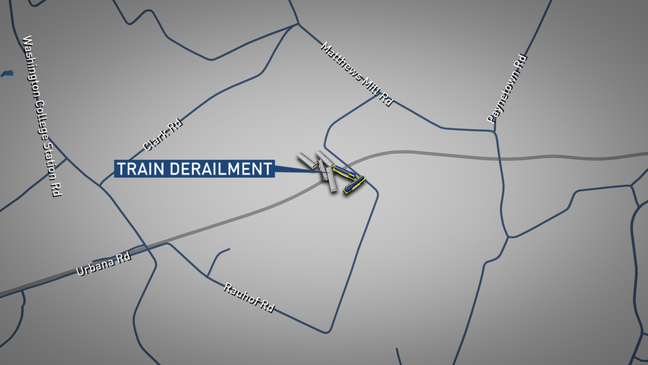 A train derailed north of Laramie on Saturday morning.

No injuries occurred when the train derailed around 6 a.m., said Union Pacific spokeswoman Raquel Espinoza. She said the derailment occurred near Bosler, a tiny enclave about 15 minutes north of Laramie.

The train, which was comprised of 57 rail cars, was carrying corn when it came off the tracks, Espinoza said.

Union Pacific has dispatched heavy equipment to clear the area and determine what may have caused the accident, she said.

The train was on its way to Rawlins from North Platte, Nebraska.

People also took to social media on Saturday to post photos and videos of the derailment. The photos showed what appeared to be grain spilling out of the mangled cars, some of which were upside down. 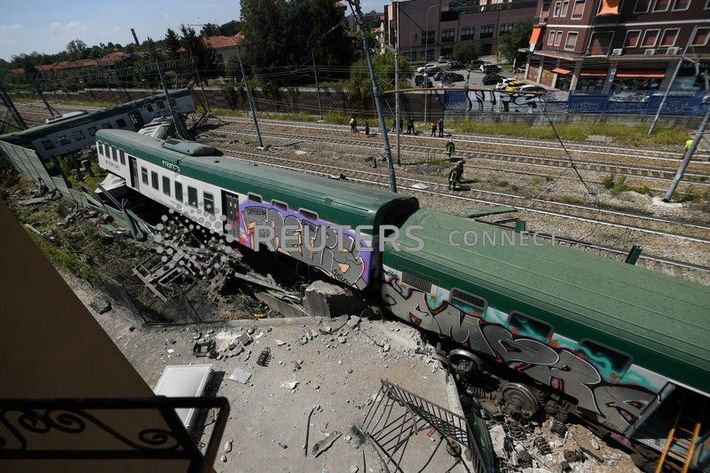 ROME (Reuters) – Three people were slightly injured after a local train derailed on Wednesday in the northern Italian region of Lombardy, Trenord, the rail company that operates the line, said.

The only passenger travelling on the train was given first aid on site but was then transported to hospital for precaution, a statement by Trenord said, adding that the driver and the conductor had been mildly injured too.

The line connects Milan and the Lake Como, and crosses a rich, industrial area known as Brianza, northeast of Italy’s financial capital.

The accident left three carriages derailed close to the station of the small town of Carnate, the statement said. The cause of the accident was being investigated, it added.