Socialism has received a second wind and now we have the 'Global Reset' from the World Economic Forum. Someone desperately wants to establish socialism all over the world. Capitalism is certainly not perfect, but still better. And capitalism has a more scientific basis and correlates with human nature. [and from another] https://www.weforum.org/great-reset/ There is an urgent need for global stakeholders to cooperate in simultaneously managing the direct consequences of the COVID-19 crisis. To improve the state of the world, the World Economic Forum is starting The Great Reset initiative. [and from another] Introducing the 'Great Reset,' World Leaders' Radical Plan to Transform the Economy June 25, 2020 https://thehill.com/opinion/energy-environment/504499-introducing-t... Although many details about the Great Reset won’t be rolled out until the World Economic Forum meets in Davos in January 2021, the general principles of the plan are clear: The world needs massive new government programs and far-reaching policies comparable to those offered by American socialists such as Sen. Bernie Sanders (I-Vt.), and Rep. Alexandria Ocasio-Cortez (D-N.Y.) in their Green New Deal plan. [and from another] Joe Biden has Deep Ties to the Radical 'Great Reset' Movement and its Globalist Leaders October 26, 2020 https://www.theblaze.com/op-ed/joe-biden-ties-great-reset It would overhaul the world's economy in favor of more collectivism and the centralization of power in the hands of international elites. This argument is best proven by examining Biden's close ties to the World Economic Forum, which is now pushing for a remarkably troubling "Great Reset" of capitalism, and the many statements Biden has made over the past several years echoing Great Reset ideology.

The cover-up over Nibiru and its pending passage has been in place since the days of President Reagan, when he issued an Executive Order silencing the fact that the inbound Nibiru had been verified in 1983 by an infrared scope. Now, gripped with fear, the elite – the wealthy and politically powerful – watch as the approaching Nibiru is making its presence known among the populace. How will they stay in control when the common man knows they have been treated with distain? The elite have lied while they themselves prepared Pole Shift bunkers.

To counter this threat, the elite have invented what they are calling the Great Reset. It in fact does not matter what the elite promise the common man, as long as the common man perceives that they will get a better break. Life will be better, more fruitful, more food and goods – whatever is required to placate an angry populace. Will this work? Throughout history mankind has become accustomed to empty promises made by those in power. The Great Reset is saying that this group of liars can be trusted to guide mankind into the future!

How will this be perceived by the common man, who has been required to pay his mortgage on a coastal home? How will this be perceived by those who have worked jobs in cities and had no opportunity for back yard gardens or free ranging chicken flocks? The debates over Nibiru will include the claim that the erratic weather and even the increase in earthquakes and volcanic eruptions is due to manmade Global Warming. Anything but Nibiru. Will this ploy work? NO!

Bank of America joined select other big banks who’ve pledged to achieve net-zero greenhouse gas emissions through its financing before 2050.

Some environmental-minded and risk-averse shareholders are increasingly concerned about the systemic impacts of climate change to the economy, including that major banks continue to finance growth in fossil-fuel projects.

Last summer, Bank of America BAC, +1.49% joined the Partnership for Carbon Accounting Financials (PCAF). In collaboration with 15 other financial institutions, Bank of America participated in the development of the Global GHG Accounting and Reporting Standard for the Financial Industry, which is intended to provide a consistent methodology to assess and disclose emissions associated with financing activities. Bank of America is committed to disclosing its financed emissions no later than 2023.

“We recognize that this will be no easy task, but we believe our commitment will help spur the growth of zero carbon energy and power solutions, sustainable transportation and agriculture, and other sector transformations, while generating more climate resilient and equitable opportunities for our future,” said Bank of America vice chairman Anne Finucane. She leads the company’s environmental, social and governance, sustainable finance, capital deployment and public policy efforts.

Bank of America joins Morgan Stanley and JPMorgan Chase as the largest U.S. banks who say they are committed to achieving net-zero-financed emissions.

In 2020, As You Sow and Arjuna Capital filed a shareholder proposal with Bank of America asking if and how it would align it’s financing with the Paris Agreement’s 1.5 degree goal.

“After a constructive engagement, followed by Bank of America’s commitment, As You Sow has withdrawn its proposal,” the advocacy group said in a release. “As the fourth largest global financier of fossil fuels, Bank of American’s leadership is significant, signaling that it will transition its financing activities in line with global climate goals.”

Bank of America’s research arm earlier this week issued a report declaring climate change as this decade’s most important theme, similar to the way technology underpinned economic growth during the past decade. Major powers will fight to lead, the report said. China has spent twice as much as the U.S. on climate action, said Haim Israel, the bank’s head of global thematic investing research.

“We believe climate strategies offer a route to global supremacy,” he said. “Whether through regulation, limits on exports, tariffs or significant investments, we believe the U.S. and China will do whatever it takes to take the lead on climate action.”

The economic impact of climate change could reach $69 trillion this century, and investments in the energy transition need to increase to $4 trillion a year, Israel said. That will lead to more than $100 billion a year in research and development...."

https://time.com/collection/great-reset/
This is not about R v D.
This is about preserving our way of life.
If America falls, the World falls.
Patriots on guard.
Q 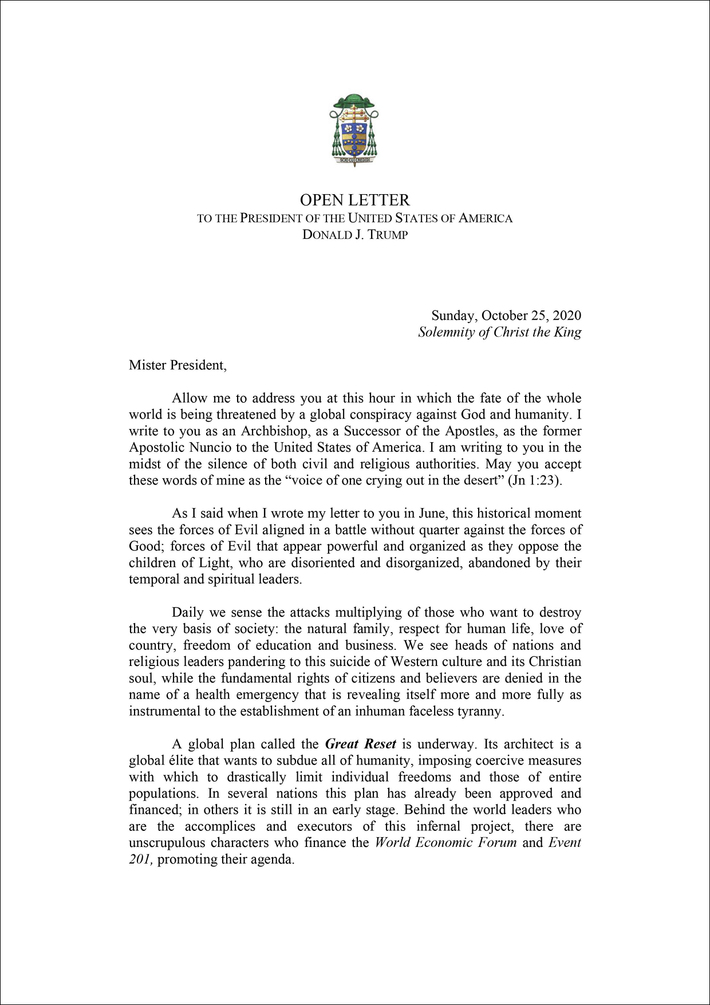 OPEN LETTER TO THE PRESIDENT OF THE UNITED STATES OF AMERICA

"...A global plan called the Great Reset is underway. Its architect is a global élite that wants to subdue all of humanity, imposing coercive measures with which to drastically limit individual freedoms and those of entire populations. In several nations this plan has already been approved and financed; in others it is still in an early stage. Behind the world leaders who are the accomplices and executors of this infernal project, there are unscrupulous characters who finance the World Economic Forum and Event 201, promoting their agenda."

Former Apostolic Nuncio to the United States of America

OPEN LETTER TO THE PRESIDENT OF THE UNITED STATES OF AMERICA - Carl...