Three common weeds that grow in the shade in warm and cool temperate climates, all over the world:

Chickweed: contains high amounts of vitamin C, as well as vitamins A, D and B.

Dandelions: Dandelions are packed with essential minerals such as iron, potassium and beta-carotene and vitamins A, C and D.

Stinging Nettle:  contain high amounts of vitamins A, B and C, as well as calcium, magnesium, potassium and zinc.

Two other weeds that should fare well in the temperates. They grow in moist soil and do very well in shades.

Garlic Mustard: high in vitamin A & C. First year leaves remain green through winter; providing a source of vitamin C ( in case pine trees arent around). They dont grow in dry areas, and are an invasive species like Kudzu.

Goutweed (a.k.a Ground elder, Bishop's Weed,) is another

pesky weed that thrives in the shade.

It is used in Asian cuisine.

The variegated variety is sometimes landscaped into gardens. It reverts back to the all green vareity and becomes a weed. They spread out mainly through their roots.

Young leaves can be eaten raw in a salad. Old leaves are cooked like spinach

The video should be helpful

Also, goutweed  has opposite groups of leaves (left), while poison ivy has alternate sets of leaves (right).

Another invasive species that tolerates the shade & can be eaten like asparagus or rhubarb.

Its found all over the world

“What is a weed?  A plant whose virtues have not yet been discovered.”
~Ralph Waldo Emerson

“A weed is a plant that has mastered every survival skill except for learning how to grow in rows.”

Thistle. (Some kinds are shade tolerant. Regardless, they are another universal weed) Malabar Spinach is a great food source now and then. It grows in sun and shade. In the shade the leaves are larger. I use the leaves like tortillas, simmer for a couple minute and put cheese, veggies, shrimp, whatever. And it reseeds itself, or you can also save the seed to start in the spring.

Wild Mustards are found all over the world like dandelions are. There are all kinds of varieities.

Yellow Rocket, Land Cress, Brown Mustard, Shepard's Purse, etc. There are too many to list them all.

Plants For A Future is an excellent tool to find out about any plant. Type in "Brassica" into their search bar, and you can get an idea of the types of varieties that exist.

A much easier alternative is to grab a book on edible weeds from the library, and find out what kind of "mustards/cress" are prevalent in your locale.

All mustards have the early set of leaves arranged in a basal rossette.

The younger leaves are lobed for most kinds.

The flowers are mostly yellow and sometimes white. But they always have 4 petals only. 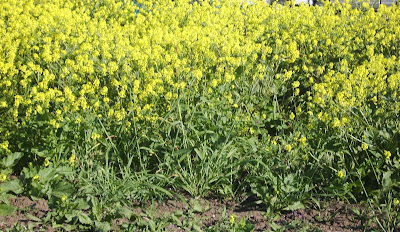 Leaves can be cooked. Young leaves & flowers used as in salads

Seeds can be used to flavour food, soups, etc

flowering stems can be cooked as well.

Anything "peppery" is excellent for coughs, throat infections, etc.

Tea made from ground seeds would be great for such cases.

Funny thing is I think Ive eaten this plant when I was little.

Common mallow (highly nutritious) can be mistaken for Ground Ivy.

Ground Ivy is in the mint family, which there are several wild varieties of.

Nevertheless, they are both edible (& found around the world).

Wood Sorrel is another low ground cover weed. Internet reports suggest to eat sparingly due to high oxalic content. Consume moderately with a varied diet. It was used to treat fevers and vitamin c deficiency.

Curly Dock (or Yellow Dock; Buckwheat family) “became an important vegetable during the Great Depression, when people were hungry”.

- Found everywhere in the world

-Seeds are high in fiber & calcium. (Not high in protein like amaranth, but still a source of grain)

Seeds can be harvested and be made flour or porridge out of.

Leaving the chaff on can make the flour or grain bitter. If making a porridge, soak the grains in multiple batches of cold water.

Step 1: [In an oven], spread the grain in a single layer and place under the broiler on the highest rack. Every minute or so pull the skillet out and stir the grain. After about 5 minute...the hulls should be very dry.

Step 2: Rub grain on top of a screen.

Note: It is toxic to horses, cattle, sheep, poultry.

The leaves & roots can have a gentle laxative effect on some.

For those in the eastern U.S. planning to utilize kudzu foliage & roots, under shady conditions the leaves may look paler & smaller.

First-year roots and second-year stems can be cooked by boiling for about 20 minutes...Young leaves & roots are eaten in Japan.

vid #2 - How to Prepare Burdock root

Once planted, they're there to stay.

The roots of both these plants contain inulin; which can result in some flatulence.