In the animated images below, February 25, 2012 to 2013 6:59am, the shadows appear to be shifting on the buildings. The sunlight is very bright,  so cloud cover or light refraction http://en.wikipedia.org/wiki/Refraction would be less of a factor (Click the image for full screen).

More Shadows Change on the Buildings in these dates: The images appear to correlate with the Earth Wobble the Zetas have spoken about! 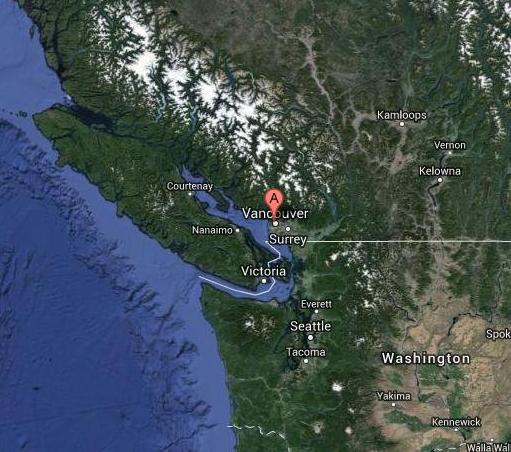 The Vancouver archives have Sunsets setting at different times from year to year (click for full screen animation!):

Comparing the Vancouver BC images to the National Research Council of Canada's predicted times, there are also differences! Sunsets do not always occur at the same times year by year as predicted!

The images below have daylight savings time in the mix,  yet there are 8 or 9 minute differences on many images: To verify whether the English Bay images are indeed showing 100% accuracy,  other related data can be checked,  namely predicted Sunrises.   Sunrise/Sunset Observatories to check:
http://www.timeanddate.com/worldclock/sunrise.html

How to read the charts below:  The numbers on the right are ‘combined monthly times’ for each day during July.  For example if 5:30 was Sunrise July 1st,  and Sunrise July 2nd was 5:31,  the combined total of two days is 10.61.  Adding all times for all 31 days in July each year brings up the right column of totals.   (To do this yourself,  go to www.timeanddate.com and try a monthly total by copying all the numbers for the Sunrise,  then adding them together).

The Sunrise prediction data on the top graph shows an increasing trend of Sunrise time delays.  The Sun is taking longer to rise year by year for the same month of July.  This again correlates with the Vancouver BC archives anomalies on Sunset times.

In the middle chart it can be seen Sunrises in November increase very slight,  but then Daylight Savings begins in November 2007 instead of October for the first time ever.  Never before had it been in November.  Right after,  November Sunrise predicted times begins to change more rapidly similar to July.

The Zeta’s mentioned a few years ago that the Earth Wobble became stronger in November 2007.  Their statements appear to go precisely on the same path as the data charts and archives above.
http://www.zetatalk.com/theword/tworx594.htm

An Earth wobble developed in 2004, under the influence of Planet X, the Zetas first warning of the extent of this on May 25, 2004.  By Nov 27, 2004 the wobble had become obvious.  The magnetic N Pole of Earth was forming a Figure 8 on a daily basis.

Are we going to develop a wobble? Are we going to suddenly lurch about so that the Sun is rising and setting in a place way off from where the public would expect?
ZetaTalk: Twirling Wobble, written May 25, 2004

Are we going to develop a wobble? Are we going to suddenly lurch about so that the Sun is rising and setting in a place way off from where the public would expect?
ZetaTalk: Twirling into Darkness, written Nov 27, 2004

Planet X has turned in place so that it is now pointing its N Pole out toward Earth. The wobble has consequently become more severe because the interaction between Planet X and the Earth is driven by a N Pole push. Each day, when the Earth's magnetic N Pole comes over the horizon so that it is facing the Sun and the bully magnet Planet X, the Earth receives a shove from Planet X, pushing her magnetic N Pole away.
ZetaTalk: Christmas Hammer, written Dec 21, 2007

The more extreme wobble, which continues to evolve, has increasingly been noted on message boards such as GodlikeProduction. During June, 2008 the following comments were posted, as an example.

I live in Fairbanks AK, used to live on the Kenai Peninsula just south of Anchorage and the Anchorage resident is right that there used to be at least a very deep dusk in the middle of even midsummer nights. Haven't been down that way for many years so I don't know about now. Here summer is definitely and always has been light all night (don't see stars from mid-May to early August), but the skies do seem more luminous, like something in the high atmosphere is scattering the light rays and we are getting more over-the-horizon 'backscatter'. This is especially noticeable in the wintertime.

I have been living in my home for 20 years now. And in this particular room, facing east for 6 years. And there is a house just to the left from where I look outside. And in the previous years, in the exact same time (exams period), the Sun would always wake me up. It would shine for approximately 2 hours straight into my room. Well now it appears that the house on the left of me is blocking the sunlight. so as a result, I get absolutely no direct sunlight in my room.

I just checked close to sunset here and it's a full 45 degrees north of due west here in Alabama. The sun is widely shining in the North end of my house, something it never used to do.

Vancouver BC Images Accuracy Conclusion
Nothing conventionally known can adequately explain the Vancouver archive anomalies other than an addition of an Earth Wobble.  The images correlate only with an Earth Wobble scenario.  The images therefore appear to be 100% accurate.   Likewise for Denver CO and Long Island NY.

Nancy Lieder has mentioned that the images below are legitimate captures of the ‘Monster’ Planet X on August 3, 2006!

“Yes the big Monster to the right of the Sun is either a Moon Swirl or PX itself (likely the latter as the ecliptic moves lower left to upper right as sunset here)."  –Nancy Lieder

The white dot in the below image is just a lens flare,  not Planet X! 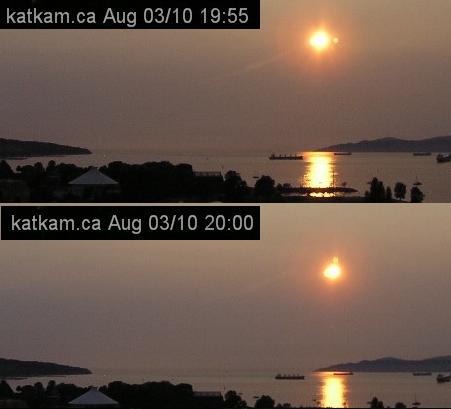 “The bulge on the left of the Sun is likely to be the big ghost, a secondary image of the Sun. This cam sits behind a glass enclosure so has a lot of reflections as well as flares. The Sun shines on the glass as well as the camera lens, and you get both.   A very troublesome site as far as PX and Moon swirl photos.  But that big Monster shot, that's legit.” [see image of PX Monster in above image] –Nancy Lieder

Webcam Archives
Webcam archives seem scarce over the web!  Most Livecams do not have links to their archives,  and most only go 24 hours back.   However Livecam streams are available in the hundreds such as City cams,  Traffic cams,  National Park cams, observatories,  volcano watches,  Travel location Livecams,  hotels, surf cams, beaches,  weather centers and more.

An example site to view sunsets 24/7 is Eternal Sunsets http://www.eternalsunset.net/more.php
A Google App is also available for Download for cell phones to find/watch Livecams streams all over the world:
https://play.google.com/store/apps/details?id=kukurin.WorldScope
Setting up your own LiveCam with Archives
Anyone can set up a Livecam and create streams and archives in real time.
For best results:
•    Choose a location to view the Sunrise/Sunset all year round.
•    protect the camera with glass/wind protection,  or inside a sturdy box or container.
•    Be sure the glass view does not get dirty throughout the year,  clean it regularly
•    Place the camera on something that does not move.
•    Do not move the camera angle once it is set!!  Comparisons are useless otherwise.
•    NO VISIBLE STREET SIGNS OR LANDMARKERS SHOULD BE SHOWING on images!  This is to protect where the camera is located for privacy sake,  as well as prevent theft or damage.
•    High definition is better for worthy archive results.
•    Red,  Blue or other filters can also be placed over the lens to filter light for better PX viewing at Sunrise/Sunset/Midday.
•    Standard Security cams are not high definition usually,  so not a good choice if low quality displays.
•    Be sure TIME AND DATE are on the archive images or the archives are useless!!

A cam can also be placed literally anywhere,  miles away from anything,  on top of roofs,  buildings and more.  For remote cams,  set the camera to record on its internal microchip.  Some cameras can be set to turn on/off at certain times to save batteries.  Switch out the microchip with the archives and change the batteries regularly.
In respect of your privacy,  please do not post links or images from your own archives unless the cam location is random (not at your home or work)!!

Hope you have enjoyed this Blog!

This is the final for this series of the images on the upper part of this blog thus far.  There are many more animations of shadow motion and other sets of anomalies.  Hopefully many more will present other archives!

Here is 9/18 in 2009 and 2010 for contrast with 2008 and 2009 within the blog.  The same movement although a bit less noticeable.  This is likely because the Wobble would seem variably uneven daily.  Click the image for the animation.

Lishore also has Sunrise irregularities (Click image if animation does not appear).

The 2009 image above is on a day with perfect visibility on the horizon.  The Sun finally appears in 7:15am image! There appears to be a different Lens Exposure, or dimmer sunlight setting for all L5A, L5E, L5D cams in 2008.  So the dimmer images of 2008 would not appear to be a factor in the L5A shadows (first animated pic above). Another angle is the L5-D angle,  not quite in the Sun.  Here you can see absolutely clear skies.  Click these images for the animation year to year.

L5 location has a second cam running at the same time called 'L5-LE' facing the Sun (opposite the 'L5-LA' pic shown above).  9/18 appears to have about the same amount of slight haze in the sky.  It has not rained,  per conditions on Weather being completely clear in comment below,  so there is likely sand on the lense,  not water in 2007.  (CLICK the pic for animation)

9/19 however has slight cloud cover,  so could those clouds be enough to change the direction of the shadows the same as the clearer day before on 9/18?

Both images are showing equal shadow movement however,  which in seeing the conditions change only very slightly,  do not appear to be changed enough to cause the exact same shadow shifting for both years.

Any new archives found may want to also include Weather Conditions for the day,  as well as dual camera angles such as this one with LA and LE (Sun pointing and shadows on back as result) for a perfect Wobble assessment.

Historical weather on Lishore NY region are same (same also on days prior and after).