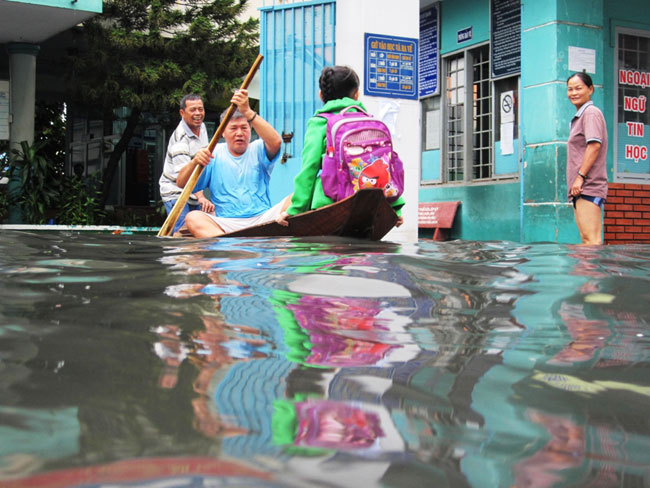 "In recent years, flooding in Ho Chi Minh City is no different urban central provinces. It does not rain, but many residential areas in HCM City can still flooded almost 2m deep "

"The people of the capital city were flooded too familiar story, month and chips bombed three times on the roads almost everywhere waterlogged. No rain also flooded due to high tides, rain is only small, the street suddenly the river. City where people regularly flooded too familiar with scenes running flood. Housing in the city that have prepared sacks of sand, forming the front of the dike, to prevent the "flood" into the house.

Recently, 4:12 pm on, resulting in the highest tides history 61 years has left hundreds of households in Hiep Binh Chanh Ward (Thu Duc) barely escapes the body. In an instant, the property was immersed in sea water. Watching the preparations for the festival tomorrow pots submerged in water that people pang in my heart, listen forecast, from now until the New Year to the four remaining tidal waves exceeded three alarms, people still have to live with flooding days to reach the festival."

High tides on the Saigon River over the past few days have flooded Ho Chi Minh City streets, adding to the city’s plethora of seemingly insurmountable traffic troubles.

According to the Southern Region Hydro-meteorological Center, the tide started rising several days ago and reached a peak of 1.62 meters on Thursday morning, lower than the record it set October this year.

Many streets were under 30-40 centimeters of water Wednesday morning, which caused gridlock during rush hour.

Many motorbikes broke down and people had to push them in knee-deep water.

On October 20, the tide in HCMC reached a 61-year record high at 1.68 meters, far higher than predicted. That level broke the historic high record of 1.59 meters recorded last year.

The high tides submerged a series of streets under half a meter of water, causing disorder. An embankment section in Binh Thanh District broke and most embankments in suburban areas overflowed with water, causing severe flooding.

Researchers have found many places in HCMC sinking by up to 20 millimeters (0.8 inch) a year.

According to the city Department of Natural Resources and Environment, many parts will sink a further 12-20 centimeters by 2020.

Besides geological factors, the surface is sinking also due to urbanization and dwindling groundwater, according to the agency.

This year, an anti-flooding program was implemented by city authorities, which included measures like installing and operating 615 sluices, building temporary dikes, setting up 28 pumping stations at heavily-flooded sites, and dredging more than 1,000 kilometers of drainage ditches and 57 canals.

But for many city dwellers flooding remains a nightmare scenario. According to the agency in charge of implementing the program, the construction of major drainage projects has blocked the current and deposited earth in the drainage system, worsening the flooding in these areas.

Whole neighborhoods now flood every time tides rise, leaving residents to bail out their own homes with buckets and mops.

The discharge of solid waste into canals and ditches and urban encroachment on waterways has also been blamed for the flooding.

Experts warned that the flooding is worsening because the city’s marshlands in Districts 7 and Nha Be, the area that excess water historically flowed into, are being leveled up to build houses for massive projects.