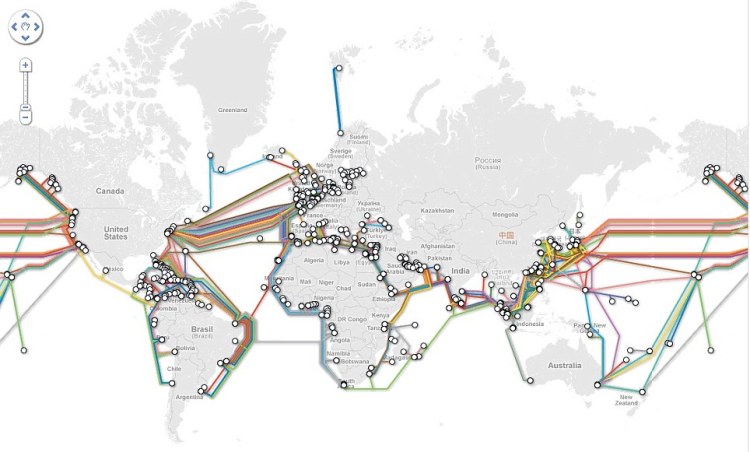 Underwater data cables linking East Africa to the Middle East and Europe have been severed, bringing transfer rates to their knees in nine countries.

It is alleged that in a bizarre coincidence, a ship dropped an anchor off the coast of Kenya on Saturday in a restricted area, cutting The East African Marine Systems (TEAMS) cable - shortly after three other cables were chopped in the Red Sea (emphasis added by me - A.V.) between Djibouti and the Middle East, the Wall Street Journal reported.

"It's a very unusual situation," Chris Wood, chief executive of West Indian Ocean Cable, the largest shareholder of the EASSY, and a major owner of data-capacity rights on the two other Red Sea cables. "I believe these were accidental incidents, although more will be known when we bring the cables up from the sea bed."

Naturally, the number of cables ruined in a short timeframe has sparked suspicions.A source from African carrier Airtel told Ugandan independent newspaper the Daily Monitor that the cables had been sliced on purpose.

* NOTE: My suggestion is that this is an early sign of Africa roll (7 of 10 events sequence)

The eruption of an underwater volcano damaged undersea Poti-Novorossiysk-Sochi fiber-optic cable. Presumably the 160-kilometer-long cable is broken in four places.

As reported on Friday the owner firm's management, on the damaged part of the cable, which was lifted on the side of the Poti station, clearly visible traces of fire, molten polyethylene sheath, the protective shield is damaged.

"I think that this should be the eruption of an underwater volcano," said Kote Samushia, CEO of cable-owner company. According to him, the damage on the main optical fiber cable Poti-Novorossiysk-Sochi was recorded on December 23. An hour after the discovery of the damage a ship from the Italian port of Catania was called.