1,000 evacuated from their homes overnight after several explosions

A train carrying crude oil derailed overnight in the heart of Lac-Mégantic in Quebec's Eastern Townships, sparking a major fire that has brought firefighters from the town and neighbouring municipalities to the area, and led to the evacuation of 1,000 people from their homes.

Witnesses reported having heard several explosions in the town of about 6,000 located 250 kilometres east of Montreal. The derailment happened around 1 a.m. ET.

It is not yet known if there are any casualties.

The fire, which can be seen for several kilometres, has spread to a number of homes, although it is not clear how many people have been forced to leave. Over 1,000 people have been evacuated from their homes after a train derailement led to several explosions and a major fire in downtown Lac-Mégantic. (CBC)

"It's dreadful," said Lac-Mégantic resident Claude Bedard. "It's terrible. We've never seen anything like it. The Metro store, Dollarama, everything that was there is gone."

A large, but as yet undetermined amount of fuel, is also reported to have spilled into the Chaudiere River.

The derailed train belongs to Montreal Maine & Atlantic, which owns more than 800 kilometres of track serving Maine, Vermont, Quebec and New Brunswick, according to the company's website.

The cause of the derailment is under investigation.

No one seems to want to take responsibility for the ongoing disaster in Lac-Megantic...

MONTREAL - Canadian Pacific says it holds no financial responsibility for the Lac-Megantic rail disaster and has rejected a legal demand by the Quebec government that it help pay for the cleanup in the devastated town.

The railway announced Thursday that it will appeal the province's legal order.

The news came one day after the provincial government added CPR (TSX:CP) to a list of defendants that it says are responsible for picking up the tab for the massive mop-up in Lac-Megantic, where a train derailed on July 6 and dumped millions of litres of crude oil into the environment.

"Canadian Pacific has reviewed the notice. As a matter of fact, and law, CP is not responsible for this cleanup," railway spokesman Ed Greenberg said Thursday.

"CP will be appealing."

MONTREAL — The embattled railroad at the centre of the deadly Quebec train derailment has filed for bankruptcy protection in Canada and the U.S. amid a flurry of lawsuits and growing cleanup costs the company estimates will surpass $200 million.

The Montreal, Maine & Atlantic Railway initiated proceedings Wednesday for Chapter 11 bankruptcy protection in a U.S. court, while its sister firm in Canada presented a petition in Quebec Superior Court seeking relief from its creditors under the Companies' Creditors Arrangement Act.

"It has become apparent that the obligations of both companies now exceed the value of their assets, including prospective insurance recoveries, as a direct result of the tragic derailment at Lac-Megantic," Ed Burkhardt, chairman of both companies, said in a statement.

"A process under Chapter 11 and the CCAA is the best way to ensure fairness of treatment to all in these tragic circumstances."...

Here is the latest update on what is happening in Lac megantic...

Here is another update on what is happening in Lac Megantic.  Lots of finger pointing...

Not to mention that efforts are underway to clean up the oil spill also caused by this crash. Reports are that surrounding communities (as well as Lac Magnetic) have to boil there water and there is a fear that the oil could reach the St. Lawrence seaway if not cleaned up in time:

As a side note (and coupled with the 8 of 10 sociological changes) I have noticed that more people are looking into the regulation an policies of the railway system (only 1train engineer per train), Oil and as Transportation etc... It is nice to know that it is now common place (mainstream) for people to not just accept the profit motive excuse: 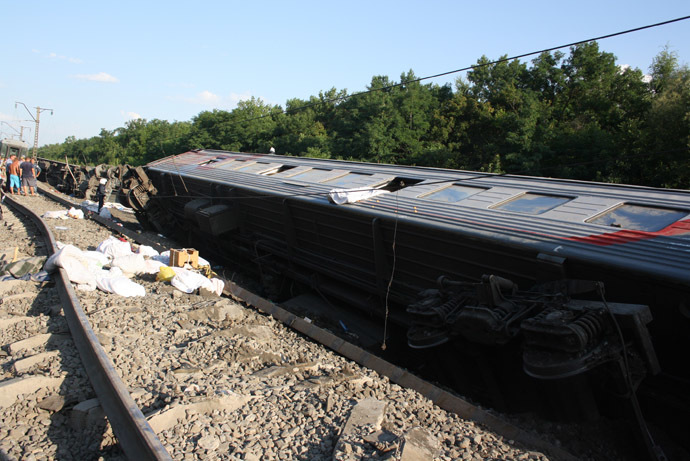 At least 80 injured as passenger train derails in southern Russia

Up to 80 holidaymakers have been injured and 15, including five children, are in hospital, after a passenger train derailed en route to the Black Sea resort of Adler, in southern Russia. Officials say it is conceivable that some of the 40 people unaccounted for may have simply vaporized in the blast.

That was the grim admission of Genevieve Gaudrault, a spokesperson for the provincial coroner's office Sunday afternoon.

"It is not impossible when we look at the intensity of the explosion," she told reporters.

Here is an update on what occured in Lac Megantic...