From dramatic cliff falls, landslips and sinkholes to loud booms and vibrations originating deep within the Earth - when combined with increased seismicity provides a seamless validation of yet another highly accurate Zeta prediction:

"England will not only be pulled down, on its western side, it is also obviously being torn in two at the River Humber. The establishment will come up with an excuse, as they always do, for the Earth changes in process, no matter how absurd their excuses become. The Eurasian Plate is being pulled apart, while the Atlantic is spreading apart. Rock layers get torn apart in this process, so the loose ground shifts as the base upon which it lies gives way. This process will continue and accelerate."

As predicted, the process has accelerated and the establishment continues to respond with contrived excuses for these unprecedented events, leaving puzzled residents seeking rational explanations. 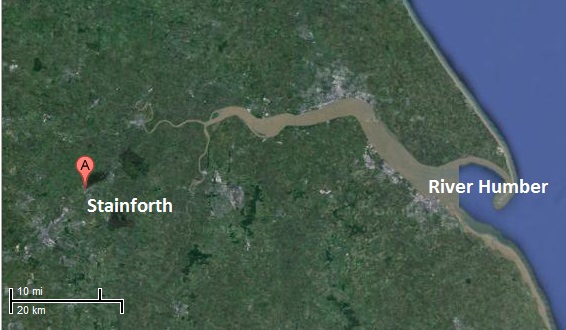 In February 2013, a powerful, upward-moving land surge demolished a railway at Stainforth, mangling the tracks in a twisted heap of debris that continued moving for weeks.

The establishment concocted an elaborate explanation for this event that ultimately blames saturated ground from excessive rainfall, the same excuse used to explain the sudden spike of landslips that occurred during December 2012. 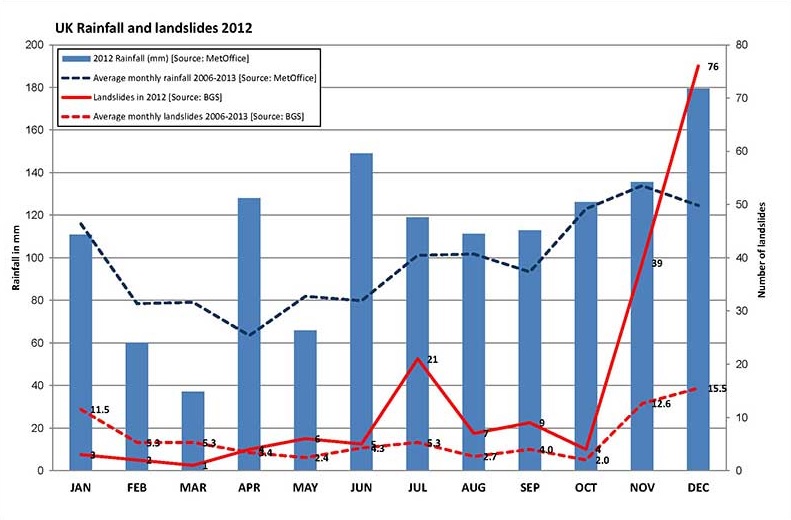 While the British Geological Survey produced charts that support the notion of excessive rainfall in 2012, by mid-February 2013, when the Stainforth landslide occurred, their records indicate rainfall had subsided well below the monthly average (see below).

This chart also begs the question, why did only half as many landslips occur in December 2013 when the UK received more rainfall than it did in December 2012?

In June 2013, unexplained explosions were startling hundreds of residents, causing property damage and even knocking over trees, yet the establishment mostly attributed these deafening blasts to sonic booms.

When Southampton residents complained of being kept awake by low-frequency vibrations in October 2013, the establishment suggested the sound is caused by mating fish.

While these mystery booms and humming noises have continued into 2014, the establishment is now busy explaining the epidemic of sinkholes, as well the uptick in earthquakes.

In step with these events, a 4.1 magnitude quake occurred in the Bristol Channel on February 20, 2014.

While the establishment called it the biggest quake to hit Britain in the last 6 years, a 3.9 quake recorded not far away in the English Channel in 2011 was reported as the area's largest earthquake in the past 300 years. 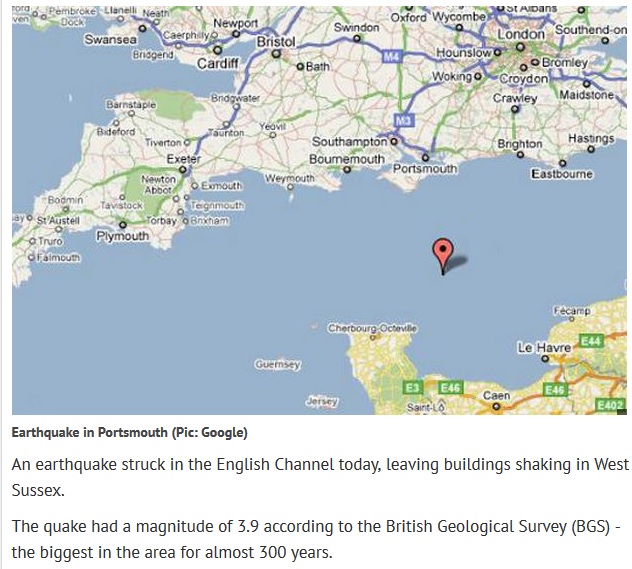 All of this simply galvanizes the Zetas' assertion that England is being pulled apart. Thousands of tons of rocks came crashing down onto Sidmouth Beach just yards from stunned onlookers.

The moment was caught on camera by Tony Lane, 60, from the New Forest, Hampshire, who said he heard pebbles falling to the ground before the landslide at 5pm last Wednesday.

Mr Lane, a youth worker, said: "There was the sound of pebbles falling, then a few more pebbles and then a few seconds later some rocks started to come down.

"I sensed something was about to happen and just started to snap away.

"Then there was a loud rumbling and a huge section of the cliff just gave way and went crashing to the beach. "A great cloud of dust rose up - people were just standing there watching in shock.

"I'd say the nearest person could only have been 100 yards away.

"The area covered by the landslide was pretty big.

"If anyone had been nearer it there would have been no chance - they wouldn't have escaped. There must have been thousands of tonnes of rock.’

He added there were some trees from part of a household garden among the cliff fall.

"Some small trees which were part of someone's garden came away I think," Mr Lane added.

"There was a big scallop out of the cliff afterwards." 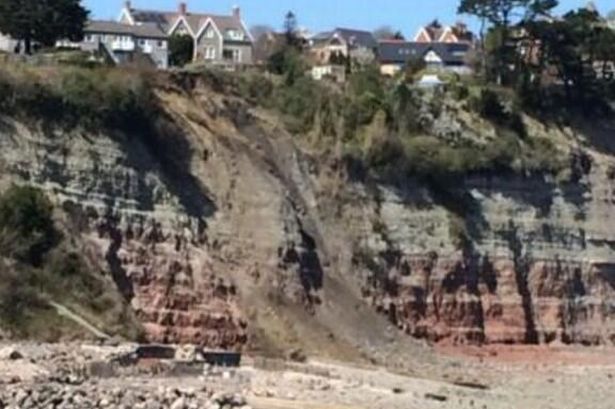 A 150-ton cliff landslide that 'sounded like an earthquake' has resulted in part of Penarth beach being cordoned off.

Coastguards said it was a lucky escape that nobody was hurt as rocks crumbled down on to the beach.

The landslide happened around 1pm earlier today, April 13, near where the former multi-storey car park was based, in between Penarth Pier and the Custom House.

At the time of the incident hundreds of people were enjoying the sunny weather by walking along the beach.

One woman, who was walking along the beach with her husband and two grandchildren, recorded the dramatic footage on her mobile phone.

It was thanks to her footage that the fire service didn't spend hours clearing through the rocks as they could confirm that nobody was trapped by the landslide.

Angela Gwyn, who was visiting Penarth from Cwmbran, said: "We saw a couple of bits fall down and that wasn't unusual, but then bigger bits started falling down."

Angela, who was with her husband and four-year-old Ryan and two-year-old Leon, added that she became concerned when bigger bits of rock joined the landslide.

"I just grabbed them and ran," she said. "It sounded a bit like an earthquake when it was all rushing down."

Coastguards, the fire service and police all attended the scene and closed off the area from the Custom House to Penarth Pier.

Penarth Fire Station green watch manager Colin Pritchard, who was one of the first on the scene, said: "150 tonne of rock came down in a cliff landslide.

South Wales Fire Service group manager Graeme Smith said it was one of the biggest landslides he had seen for a while. 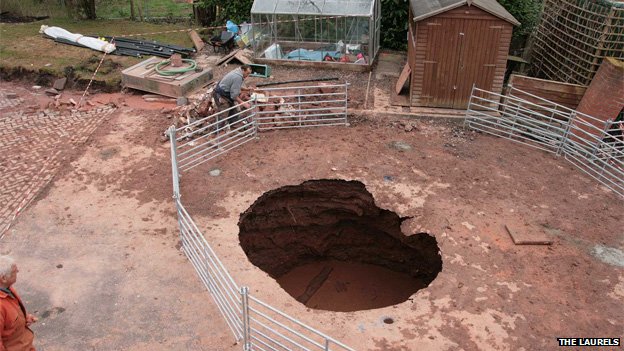 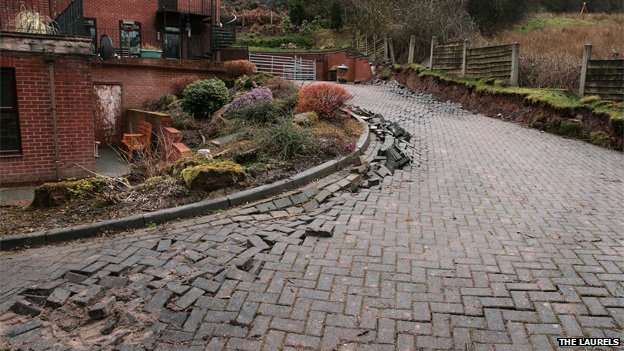 A sink hole has opened up next to a bed and breakfast in north Staffordshire.

Phil Tester, owner of The Laurels, in Oakamoor, said the chasm appeared on Thursday morning and now stood at more than three metres (10 ft) wide and is expanding "all the time".

Mr Tester said experts were on site to try and find out what caused the hole to appear.

The hole followed drilling work at the property this week to check damage caused by a nearby landslide last year.

Mr Tester said: "It's been an incredibly stressful time, there have been a few tears.

"It's not just our business, it's our home and [wife] Helen's parents' home.

"We were all in guest bedrooms last night, in rooms furthest from the hole. But, as you can imagine, we didn't sleep very well."

He said it was difficult to determine the depth of the hole as "deep water" had been found almost two metres down.

The business was forced to close two weeks ago after cracks in the property were followed by damage to the car park, fence posts and walls.

The B&B is built on a hill and work to excavate land further down for redevelopment was stopped by the Health and Safety Executive in January after the landslip.

He said his property was built over a clay pit and experts had struggled to find solid rock.

"It's only our second season here and we've had to unpick our whole business," Mr Tester said.

"We've had to pay back deposits. One woman booked in September for April, a special birthday booking.

"We've had to cancel it with just a fortnight's notice."

The hole is now due to be filled in with rocks, before being injected with concrete. A concrete cap will then laid on top. An approximation of where the crack runs. 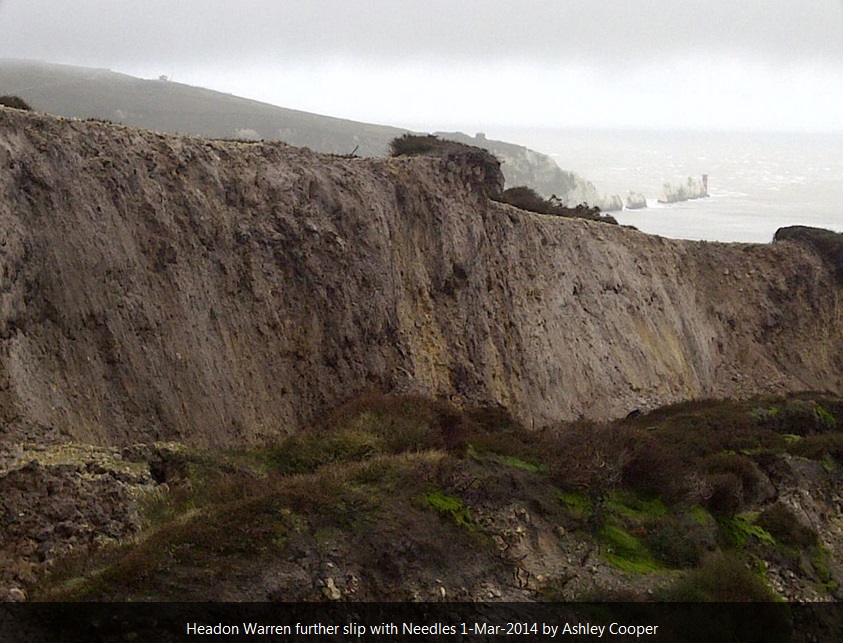 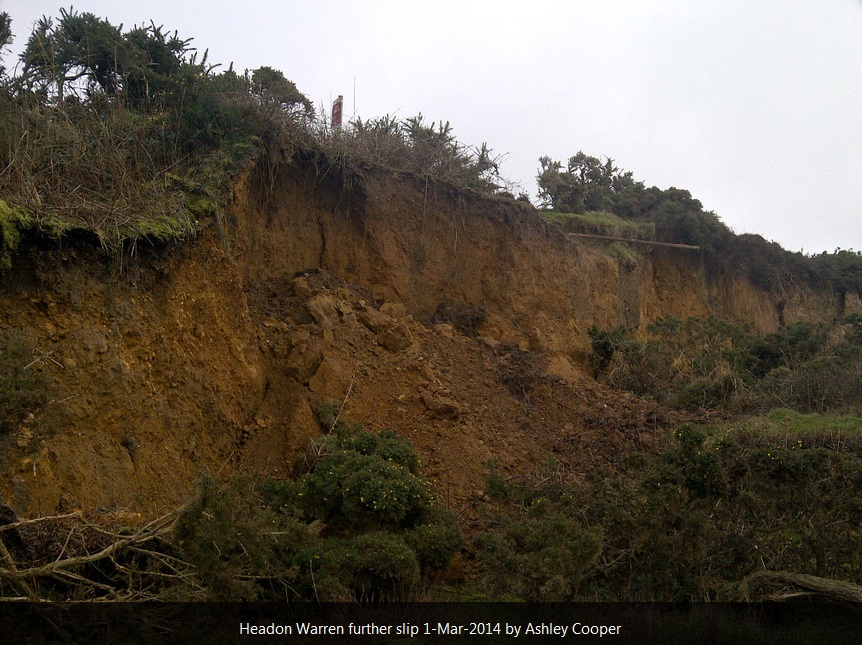 On February 17, a massive land crack developed on Headon Warren, north east of the Needles on the Isle of Wight.

It was initially described as a 6″ (15cm) wide crack running about half a kilometre (0.3 mile) long.

The drop at the crack was variously described as between 6ft and 30ft.

Two weeks later on March 1,  the entire area fell away from the ridge according to photographer Ashley Cooper.

People living in Freshwater and Totland, those with a strong local knowledge, described it as having the potential of becoming the largest amount of land to slip in recent times.

Hundreds of Acres in Dorset Heading for the Sea (Feb 28) 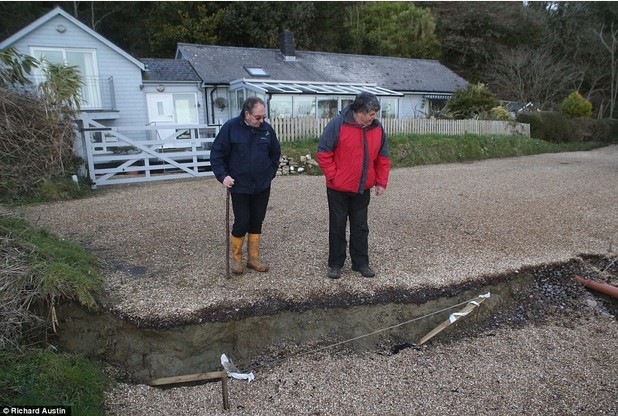 Just west of Lyme Regis hundreds of acres of land are slumping slowly seawards, billions of tonnes of rock and mud are on the move, a £1m holiday home has sunk two feet in two weeks, a three-foot step has been cleaved across a road a quarter of a mile inland from the sea and seven miles of the South West Coast Path are closed.

Those are just some of mind-boggling statistics applicable to the biggest mobile chunk of terra-firma in the UK, which can be found at the end of Ware Road in West Dorset.

Lyme Regis residents are used to seeing the Jurassic Coast’s sea-cliffs fall spectacularly into the pounding waves – but now cracks and fissures are opening as far as a third of a mile inland of the coast along the famous Undercliff.

Retired Lyme Regis harbour-master Mike Poupard lives close to the Ware Field area. He pointed to an extensive chalet-style holiday home which was recently bought for just under £1 million and said: “I walk here most days and I can tell you the house has sunk over two feet in the past fortnight.”

A large crack could be seen across the gravel drive just feet from the home’s front door while just feet away a telegraph pole, dislodged by earth movement, was resting at an alarming angle. Seawards of the home massive cracks in the ground had opened up across paddocks, and areas of paddock and field had dropped to form large steps in the landscape.

The most damaging of these could be seen dividing an access road where an abrupt, vertical, three-foot drop now cleaves the lane in two.

The more you looked at the general scene, the more you realised that cracks and fissures large and small had been opening up across many acres.

“It’s all become a lot, lot worse in the past two weeks,” commented Mr Poupard.

Comment by Kris H on February 24, 2014 at 5:12am
They are talking about moving Parliament north to Manchester. Manchester near part of Britain to stay above the waves.