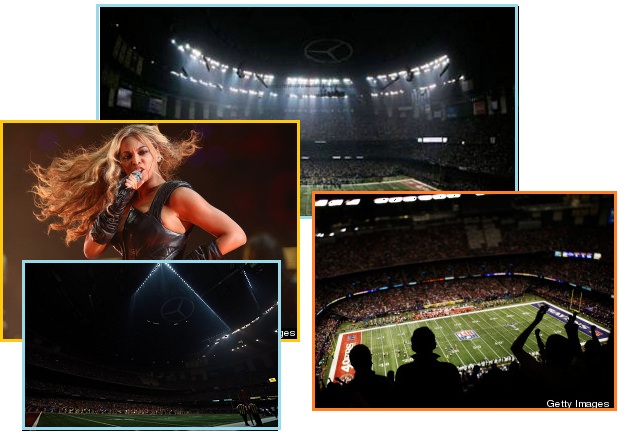 Question posed on the 2/9 ZetaTalk Q&A, provided early because of relevance to the pending announcement on Planet X. The authorities cannot explain what happened.

I'm extremely curious as to the power glitch at the Super Bowl.  Just purely a fluke or was something else attempted?
[and from another]
http://www.reuters.com/article/2013/02/04/us-nfl-superbowl-lights-i...
A problem with the "electrical load" caused a sensor to open a breaker and partially cut power to the dome "in order to isolate the issue," a safety feature that worked "as designed." The cause of the abnormality is unknown. After a half-time show by the singer Beyonce heavy on electric lights. Outages are not unheard of in the NFL. Two power outages in a single game delayed a game between the 49ers and the Pittsburg Steelers at San Francisco's Candlestick Park in December 2011.
[and from another]
http://hosted.ap.org/dynamic/stories/F/FBN_SUPER_BOWL_POWER_OUTAGE?...
Without warning, the power to the Superdome suddenly shut down early in the third quarter, plunging parts of the 38-year-old stadium into darkness and leaving TV viewers with no football and no explanation why.
For 34 minutes, the players tried to stay loose, the fans milled about in darkened corridors, and stadium officials scrambled to figure out what went wrong.
[and from another]
http://energy.gov/articles/super-bowl-city-leads-energy-efficient-f...
To make this the greenest Super Bowl, the New Orleans Host Committee has partnered with fans and the community to offset energy use across the major Super Bowl venues. Off the football field, New Orleans is embracing energy efficiency with help from the Energy Department. Embracing energy efficiency and renewable energy is having a profound impact on attracting developers and private industry in the New Orleans’ re-building efforts. The push to re-invent this destination city contributes to making Sunday’s game the greenest in Super Bowl history.
[and from another]
Super Bowl Blackout Explained
February 4, 2013
http://thestir.cafemom.com/sports/150606/super_bowl_blackout_explai...
An "abnormality in the system" cased the Super Bowl blackout, according to Superdome officials. A piece of monitoring equipment picked up on the abnormality and shut off the lights so the issue could be isolated. The emergency generators kicked in immediately. But they don't know what caused that "abnormality."
[and from another]
'Abnormality' Blamed for Superdome Blackout
Feb 4, 2013
http://www.newser.com/story/162171/officials-abnormality-behind-bow...
Embarrassed officials say the blackout that shut down the Super Bowl for 34 minutes was caused by an "abnormality in the system," though they're still in the dark as to what caused it. The Superdome's management company says power was partially cut to isolate the issue after the problem was detected and backup generators kicked in as designed.
[and from another]
Super Bowl Blackout: What Went Wrong?
Feb 4, 2013
http://www.13wmaz.com/sports/article/215593/45/Super-Bowl-Blackout-...
Entergy, the local electric company, said in a message posted on its Twitter account that there were no power issues outside of the Dome, and the "power issue at the Superdome appears to be in the customer's side."

SOZT
What officials in New Orleans are not telling the public is that the blackout that struck the Super Bowl should NOT have happened. An electromagnetic pulse, causing an electrical surge, causes an automatic shutdown on equipment. This is a protective maneuver, as either the surge or its opposite, a brownout or dip in the flow, can damage equipment.  Such pulses have occurred since Planet X arrived
http://www.zetatalk.com/index/lou1205.htm
in the vicinity in 2003, notably the outage in New York City
http://www.zetatalk.com/index/lou1205.htm
on August 14, 2003 and the power surge at the Sayano-Shushenskaya dam
http://www.zetatalk.com/index/zeta526.htm
on August 17, 2009. They can also occur during a massive solar flare, but no such flare occurred during the Super Bowl, nor was an electromagnetic pulse from Planet X responsible as EITHER source of such a pulse would cause WIDESPREAD damage, not be focused inside a single building as the Super Bowl outage was.

Officials are at a loss for an explanation as it was not faulty wiring, not excessive use of electricity causing a brownout, not a faulty generator for auxiliary lights creating an overflow of electricity into the system, and not some force of nature such as a solar flare. The system was clearly supporting demand as the first half had passed without incident. Beyonce required auxiliary lights but her show had completed before the blackout. The blackout occurred as the second half was in process. A force of nature, such as a solar flare or pulse from Planet X, would have affected a broad area, but the blackout was caused by a focused surge within the SuperDome. The FBI has assured all that terrorism was not a factor. It was not a deliberate sabotage of any sort.

So what happened? We explained in March 3, 2012 that the Council of Worlds had engaged the cover-up
http://www.zetatalk.com/ning/03mr2012.htm
in what we called a war, as to allow the Earth changes to proceed as nature intended while the common man was kept ignorant of the cause would interrupt the spiritual lessons the passage of Planet X, aka Nibiru, provides. Punch 1 occurred on March 12, 2012 when the Earth’s magnetosphere appeared to completely reverse,
http://www.zetatalk.com/ning/24mr2012.htm
though this was only the view provided by NASA’s satellites and did not affect the Earth. By June 16, 2012 the Obama administration was formulating an announcement, but due to the efforts of those wanting the cover-up to continue and the pending re-election of Obama, these efforts were put aside until after the election.

Now the November 6, 2012 election is past. Potential blocks to the legitimacy of the Obama presidency, such as the Electoral College vote on December 17, 2012, are past, as is the acceptance of this vote by the House in early January. The swearing in ceremony on January 20, 2013 is past. And key positions within the administration, such as Secretary of State, Secretary of Defense, CIA and other less important cabinet appointments are essentially filled or guaranteed to be filled by Obama’s nominees. The fiscal cliff is resolved in Obama’s favor, with the Bush tax breaks to the rich ended. The debt ceiling has also been resolved, the House allowing Obama to raise the ceiling, at least temporarily. The announcement team is ready, yet Obama is not proceeding, lingering for yet another day or week, as he fears the reaction will be devastating and exhausting.

The Council of Worlds has lost patience. The deliberate blackout during the Super Bowl was just a gentle nudge. Punch 2 has been delayed because the Obama administration was dead serious about announcing the presence of Planet X, having NASA explain what they have withheld from the public, having NOAA and the USGS explain how the near presence of Planet X has affected the globe. It is time for the little guy, the common man, to have the same access to information that the elite enjoy. Rather than punish the common man by releasing the full force of the 7 of 10 plate movements, the Council will be punishing those involved in continuing the cover-up, whether friend or foe.
EOZT

Prior ZT: http://www.zetatalk.com/ning/03mr2012.htm
What is likely to shock the world is the drama being contemplated by the Council of Worlds, in their current battle with the cover-up. This will be something that the establishment has not guarded against, not even contemplated. This will be a series of signs to mankind that even the common man has not contemplated.

Prior ZT: http://www.zetatalk.com/ning/16ju2012.htm
What would be the outcome of admitting that there is a planet in the inner solar system?  They could make a general announcement. They could have Obama make this.  He could explain that the issue had been under security directives to avoid panic but that it is coming closer and becoming more obvious and they feel that the public needs to know. They could present diagrams showing where Planet X is positioned, and explain what it’s doing to the Earth, causing the wobbling and weather changes. They would say they’re not sure what the outcome will be but that the public will be kept informed, then walk off the podium and let some scientist take over to explain all the details.

2003 Outages: http://www.zetatalk.com/index/lou1205.htm
#186: Aug 14 massive power outage swept across swaths of the eastern United States and Canada
#227 Aug 28 power outage during the evening rush hour creating havoc for around 1 million commuters
#242 Sep 1 A power outage today blacked out parts of peninsular Malaysia
#243 Sep 2 A power outage left at least 3 million Mexicans in the southern Yucatan peninsular without electricity
#244 Sep 2 Finland, Russia, and overnight power blackout in Sydney´s business district.
#303 Sep 23 A power outage struck the capital of Denmark and southern Sweden on, leaving 4 million people without electricity.
#310 Sep 28 much of Italy is without power after a blackout swept the country
#333 Oct 6 major power failure blacks out Czech Republic.
#451 Nov 7 most of Chile lost power in a major blackout