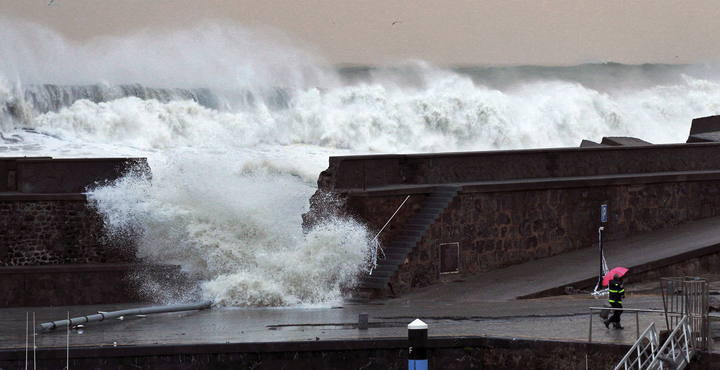 The beach at El Sardinero seems a battlefield debris , remains of broken rails and playground . Tense during the early morning waves over ten meters have ravaged the coast in the early hours of the morning was proof of the severity of the damage . The list is long and runs through the Cantabrian coast , from Castro Urdiales to San Vicente de la Barquera, with the capital, Castro Urdiales and Laredo as most affected areas. Waves at the Virgen del Mar has thrown rub maximum height 11 meters , according to Red Buoy Vigia Government of Cantabria , 8.15 meters santoña .However oceanographic buoy weather station Augusto Gonzalez Linares, which is located 27 miles from the Virgen del Mar, collected two waves of around 15 meters at two and seven o'clock

In the Avenida Garcia Lago Santander sum flooded buildings and walls up. The Hotel Chiqui , however , has resisted remarkably well the fury of the sea. Can not say the same restaurants and Cormorant Park , in the foothills of El Sardinero beach , like the BNS room that is cracked . Water has armored doors and windows broken . The local " is the closest thing to a pool ," he said early in the morning a cop .. The picture was perfect chaos : stools , bulletproof glass , chairs , tables ...all ' snorkelling ' on the premises.

At low Maremondo restaurant , the owners of the Surf School Sardinero found with local devastated. " At six o'clock it was high tide with a coefficient of 103 and Hercules fortnight ago has become Samson tonight. Was the accident , the sea has hit hard at that time , as always but has coincided with a wave of a hundred . Was as if it had been a tsunami , "explained the veteran surfer and businessman Carlos Beraza . A few yards away , showers torn with cement bases and a broken swings that seem to be of the second beach , across Piquío , piled in the corner of the low . An authentic battlefield.

The mayor of Santander, Iñigo de la Serna , visited the area and explained that the City is working on an overall assessment of the damages that have particularly affected the Second El Sardinero Beach and Lake Avenue Manuel García way . Water has started in this area 150 meters from rail plus smash , pillars and stone walls and lifting tiles passing numerous promenade.

The cash register restaurant 'The Park ' in Santander appeared stranded on the supermarket car park Lupa, more than a hundred meters. The waves swept local, recently restored from damage from a previous storm. A sea of ​​twisted metal , splintered glass and kitchenware restaurant carpeted place . The same fate befell his neighbor ' Cormorant ' . The water reached the first floor , broke windows and flooded the halls . All around, the ice cream kiosk was uprooted from its location and situated within the ride. Several provisions of the Local Police and Firefighters work from this morning in the area next to the street cleaning services will keep operating all night.

In Castro Urdiales, strong waves that occurred coinciding with the high tide has caused the displacement of several vehicles that were parked in the park Iron Silvestre Ochoa Street and La Atalaya, who finished colliding with each other . In addition, the strong waves caused flooding in the basement of a house in the Avenida de la Playa . The tide has also taken about 35 meters quay wall Don Luis , part of the balustrade of the Pergola and has busted several crystals of Hotel Miramar, located on the beach in Brazomar . The virulence of the sea has also been felt in Hall Nautical Activities in which there have been various materials that have affected trawlers Sports Rowing Society . Beach december in Mioño also has dawned affected by the storm. The emergency services have been forced Castro to cut off access to St. Guillen and the Avenue Plaza for concern.

112 Cantabria teams have had to act to bail water on local streets and San Vicente de la Barquera, that on Saturday and suffered minor flooding . In Comillas beach turned razed. The wooden structures of the main entrance and remains of the concrete railings appeared on the wall of the barracks of the Civil Guard, " and do not know where the showers are " read first thing in the morning the Mayor Maria Teresa Noceda , who inspected the damage. The beach has disappeared Oyambre parking and waves have eaten part of the dunes fence golf course is now directly on the beach. The duel chiringuiro ' The bird amarilolo ' recounted as the waves passed over the roof of the premises.

Emergency services also had to intervene to help injured or washed ashore on the campsite Garlic ( Bareyo ) , where the waves have moved several cars.

The Red Buoy Watcher of the Cantabrian Government located off the Virgen del Mar has registered this morning Waves of up to eleven meters. The buoy Augusto González Linares, the Spanish Institute of Oceanography has anchored 22 miles north of Cabo Mayor, the waves have been greater , with mean values ​​of between nine and ten meters. In this case , the data do not specify the peaks reached.

The storm has caused severe damage in the Comillas Beach . The strong wind that blew all night up the wooden planks of the ramp that leads to the sand and caused havoc in the showers . But the greatest destruction occurred undoubtedly in the railing that separates the beach promenade , which has been , in many sections, reduced to rubble.

In the area of pine forests , and has caused soplaos " has moved a lot of sand ," said the mayor, Teresa Noceda . In the port area , the storm has also left its mark " and has devastated the gates of the cellars ." Noceda explained that " had never seen destruction of this caliber in Comillas Beach " and said that " it will cost a lot of money to fix it ." For the City, "has given part Coasts and Ports and so far , we can not know how much, but again put this into terms we will cost a lot, because it has been a disaster ," settled.

" Never had this happen ," says the local police in Laredo. " If it rains we flooded the village " . The villa has also seen extensive damage . The stone walls of the street Almirante Bonifaz are blown , like the doors of the boardwalk.

" The picnic of the strut are up five feet of water and access roads are impassable ." Flooded streets , destroyed by being washed ashore and collided against walls or other cars seven garages flooded vehicles ... In Laredo "injuries are numerous and the ships left port ," according to the Local Police.

Santoña is another municipality that has suffered the effects of the storm . The beach of San Martin has been the most affected and the strength of the sea has been carried out more than 18 meters barandilla.También has uprooted one of the showers . The campaign of the passage , which is located opposite the Military Board , has been flooded and has also suffered damage Pier pleasure boat that connects Laredo Santoña in particular have been shattered wooden stairs giving access to the beach.

The time not spent long in Suances overnight and left impressive scenes in various parts of town . In the Los Locos beach , the waves swept the front of the terrace chriringuito specifically the railing and awning that covered . Two years ago something similar happened , but also water the terrace floor , wooden, which has now been enhanced was and has remained in place.

No major damage has occurred, in the beach of La Concha , water has entered the interior streets and in specific areas of the bike path and dragged sand and palucada . This scene has been seen on the street Enrique Oti , at the height of Restaurant Ciaboga and from the area of ​​The Pier Hotel has also gone up to the water stop at Hotel Soraya.

In Tagle , strong olejaje has left the beach without sand.

The coastal storm has left its mark on the town of Santoñaque has dawned with a trail of destruction in its two beaches , which have been damaged by the lash of the waves. On the beach located in the town most affected area was San Martín offered a hard punch . The rocks , sand , sticks and algae invade this part of the ride that has seen its metal rails have been torn by the roots with the tiles on which they were installed included. The stone benches have also been displaced several meters and the shower was on this beach . At the foot of Fort St. Martin stones carried by the sea accumulate. The campaign of the glacis , against Military Board has awakened completely flooded imagine being able to hit up the surf last night . Passage Pier have not escaped since the wooden structure to facilitate access to the beach of La Machina has been uprooted and destroyed their tables full. And the whole ride, to a greater or lesser extent, has remnants of sand.

Another eastern municipalities that have not escaped this furious storm is Bareyo . Here, the beach has been Cuberris most important damage left by an unfortunate image . The waves have uprooted the concrete walkways that allow access to this sandy and has destroyed the entire street furniture including public bathrooms. The sand level , says Mayor Jose de la Hoz, have fallen about fifteen feet in sea water has even reached the hotel zone where you have suffered flooding and camping . Such has been the force that has driven cars that were in place and has been introduced in the camping facilities .

Where ordinarily above the waves, when the waves get larger, Spain will find that land once considered safe is no longer so. During the hour of the shift, stretching of the Atlantic will pull Spain down some 50 feet, so that the coastlines will find flooding and high tides, and water flowing inland along rivers. Many will flee to the mountains in northern Spain, but due to the stretch the Atlantic will undergo, this land will sink, and those flocking there will be living on top of each other after the shift with nowhere else to go. They will find themselves perched on islands, staring across an expanse of water to toward the Alps, also crowded with desperate people who crawled there as the lowlands disappeared under the rising sea level, and to toward Africa, the better choice for migrating to a place less crowded. Due to its relatively high land mass, Africa will be almost entirely above sea level even after the poles melt and the sea level rise some 650-700 feet, worldwide.