(Ceres is classified as a dwarf planet. It is situated between Mars & Jupiter, in the asteroid belt.)

It looks like we won’t be seeing the real-life Mulder and Scully anytime soon, as least according to recently departed White House adviser John Podesta.

“Finally, my biggest failure of 2014: Once again not securing the #disclosure of the UFO files. #thetruthisstilloutthere,”he tweeted on Friday, his last day in the White House.

Podesta’s love of the “X-Files” TV show, along with his fascination with all things extraterrestrial, is well documented.  Back in 2002 Podesta even discussed the importance of disclosing government UFO records at a conference organized by the Coalition for Freedom of Information. “I think it’s time to open the book on questions that have remained in the dark, on the question of government investigations of UFOs,” he said. “We ought to do it, really, because it’s right, we ought to do it because the American people, quite frankly, can handle the truth, and we ought to do it because it’s a law.”

The public’s appetite for information on UFOs remains strong. Earlier this year, for example, a slew of UFO files hit the Web when UFO enthusiast John Greenewald posted declassified records from Project Blue Book -- the U.S. Air Force’s records on alleged UFO and extraterrestrial sightings -- on an online database. Greenwald had spent decades filing Freedom of Information Act requests on the topic.

However, scant reference is made to Roswell, New Mexico, in the database.  The alleged 1947 Roswell incident continues to be a source of controversy, with conspiracy theorists claiming the U.S. military found and covered up evidence of an alien spaceship crash.

(One of many witness drawings of the Kecksburg object). Notice the markings on the UFO, which the zetas say is synonymous with STS aliens.

A 2012 poll showed that nearly 80% of Americans believe the government has concealed information about UFOs. [According to zetatalk, the crash at Kekcksburg was spaceships provided by the STS aliens, that the military was trying to control & crashed. Zetatalk on Kecksburg]

[A judge ordered NASA to open up their files on the case & yet nothing was found...

The judge had some less than ideal things to say about NASA, as well. But I guess they're trying to turn over a new leaf. They have one chance. Let's hope they do it right; And that old habits & friends dont come back knocking]

In a Curious Case for Astronomers, a Brown Dwarf Goes Missing

-a brown dwarf that orbits a binary system.

-The brown dwarf isn't easy to capture/image (Might be hinting at the excuses establishment might throw for coverup. idk)

(This so-called brown dwarf, as I understand it, is completely made up. The orbit of the twin stars had periodic irregularities. So they simply hypothesized that it must be a brown dwarf tugging the stars.)

(What Would Happen if the Earth Stopped In Its Orbit?) graphic = http://www.wired.com/2014/12/empzeal-earthfall/

Same story about Scholz's star, with better headline; relates it to within span of human history. There was another star in the solar system when humans first spread from Africa Link

“I dream of a world where the truth is what shapes people’s politics, rather than politics shaping what people think is true.”

I am currently reading The Collapse of Western Civilization, A View from the the Future by Naomi Oreskes and Erik Conway and it got me thinking.  The “book” is in fact a mere booklet, a 52-page essay the size of a postcard but it packs a lot in its tiny package.  The authors imagine a future historian in the year 2393 looking back on our present time to discern and explain “how we — the children of the Enlightenment — failed to act on robust information about climate change and knowledge of the damaging events that were about to unfold.”

“Our historian concludes that a second Dark age had fallen on Western civilization, in which denial and self-deception, rooted in an ideological fixation on ‘free’ markets, disabled the world’s powerful nations in the face of tragedy.”

I have thought about this issue on a daily basis for the last nine years and continue to seek new words to express my perplexity.  Oreskes and Conway write, “While analysts differ on the exact circumstances, virtually all agree that the people of Western civilization knew what was happening to them but were unable to stop it.  Indeed, the most startling aspect of this story is just how much these people knew and how unable to act upon what they knew.  Knowledge did not translate into power.”

Or to put it differently, knowledge did not lead to wisdom and without wisdom, the people were lost.  How did this happen?  As the title of this blog suggests, it was not an accident.  The science was and is completely uncontroversial.  The accumulated science from the 1950s to the late 1980s led to the uncomplicated understanding that what was long predicted — human-caused global warming — had leaped from the science journals and the climate models and was now present in the world.

Still, what was extremely controversial was the implications of our folly.  We had begun to alter the atmosphere, the hydrosphere, the cryosphere and the biosphere.  And all blame pointed to human civilization’s addiction to fossil fuels.  Oreskes and Conway correctly identify industrialists, bankers and politicians as the culprits in the creation of a cult of denial that soon developed to confuse the consensus and muddy the minds of a conservative portion of the public who were remarkably easy to sway.

As the chart below shows, even as late as 1998, there was very litt...  A mere seven points (46-53%) divided Democrats, Independents and Republicans when asked if global warming was already happening.  Only fifteen years later, however, the gap quadrupled to 28 percentage points as Republicans reacted to the denial soup they were fed on a constant basis by conservative lies and propaganda disguised as journalism.

From 1998 to 2013, the fix was clear.  If you were a Republican, you were taught to distrust science and deny the truth.  No evidence was ever given for the denial and happily for the Kochs and ExxonMobil, they discovered their gullible followers were easy to fool.  They did not require any proof.  They still don’t.

Regarding the cause of temperature increases, the gap between D’s and R’s went from 16 points in 1998 to 39 points in 2013.  Twice as many Democrats understood the science than did Republicans.  What could account for this except for the successful selling of a lie by a motivated campaign to manipulate perceptions of conservatives?

When asked if global warming would pose a serious threat to you in your lifetime, the gap between D’s and R’s again doubled from 1998 to 2013 from 16 to 32 percent.

Finally, we find that when Republicans were asked in 1998 if the seriousness of global warming was exaggerated by the news about one-third agreed.  As they were sauteed in denial sauce for a decade and a half, however, we find the number of GOP deniers nearly doubled to close to two-thirds.  The science did not change.  If anything, it became more certain.  But the message of denial and deception became more bold, more strident and more shameless until the hope of effective action to prevent the Great Collapse became all but lost.

I don’t know how this story ends but I know where it is going and I know who is driving the bus.  There is no controversy here except for the one carefully crafted by conservatives who are terrified by what might happen if the public truly understood what is coming.

Oreskes and Conway write, “But as it was, by the early 2000s, dangerous anthropogenic interference in the climate system was under way.  Fires, floods, hurricanes and heat waves began to intensify.  Still these effects were discounted.  Those in what we might call active denial insisted that the extreme weather events reflected natural variability, despite a lack of evidence to support their claim.  Those in passive denial continued life as they had been living it, unconvinced that a compelling justification existed for broad changes in industry and infrastructure.”

Looking back from the future, it will be easy to blame the Kochs, the Republicans, the coal, oil and gas companies, Fox News and the conservative think tanks.  Their crimes will be damning and clear.  What is less clear are the millions of us in passive denial, those of us standing by and watching this disaster unfold as if we had no part in it, as if our children’s horror is not just as much our fault.

The truth cannot be accepted and acted upon when it has been so hopelessly distorted in false controversy.  That is how our future historian may come to understand our cowardly impotence.  We were afraid to speak out for fear of what others would think.  So we went along and watched it all collapse and acted surprised when we realized it was too late.

Scholz's Star on the BBC also. Note when describing the "companion" of Scholtz they are essentially describing Nibiru! An unlit brown dwarf traveling with the star. They are also introducing the concept of such a pair interacting with OUR solar system, as the mythical Oort Cloud (which the Zetas say in fact does not exist http://www.zetatalk.com/science/s51.htm) is purported to surround OUR solar system. Next they will say "oh, and we have one right next to our Sol! Just noticed it.

The object, a red dwarf known as Scholz's star, cruised through the outer reaches of the Solar System - a region known as the Oort Cloud. Scholz's star was not alone; it was accompanied on its travels by an object known as a brown dwarf. These are essentially failed stars that lacked the necessary mass to get fusion going in their cores. Observations of the dim star's trajectory suggest that 70,000 years ago this cosmic infiltrator passed within 0.8 light years of the Sun.

Artist's conception of Scholz's star and its brown dwarf companion (foreground) during its flyby of the solar system 70,000 years ago. The Sun (left, background) would have appeared as a brilliant star. The pair is now about 20 light years away.

This scene of 2 suns was shown for 1 to 2 seconds in The Walking Dead, Season 5 Episode 10. About 5-10 min in the show. I took this photo with my phone while watching it on demand. 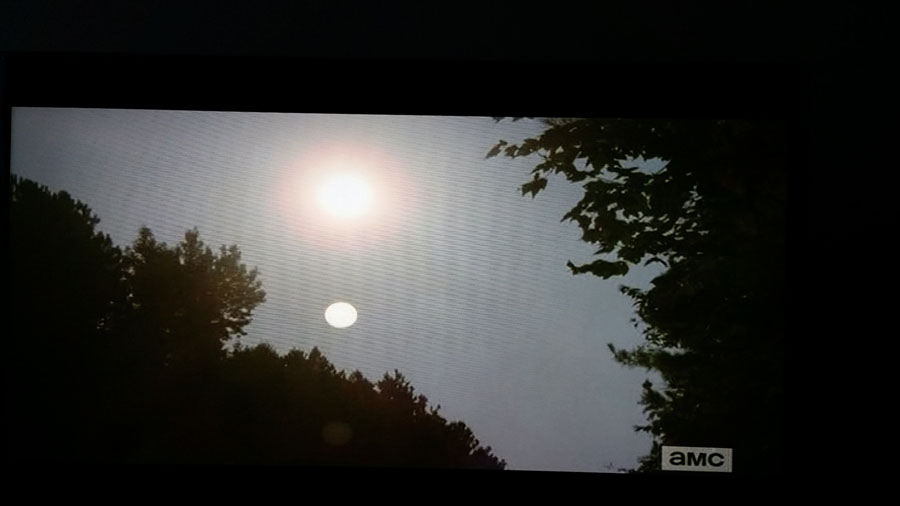