The standing crops on thousands of acres have also been submerged. The spokesman of irrigation department told the state-run radio that the worst-hit crops include cotton‚ sugarcane‚ dates and banana.

He said that the affected people of marooned villages were being shifted to safer places. District administrations had also established relief camps where they were being provided items of daily use, including cooked and dry food.The flash flood water is mounting pressure on protective bunds at Piryalo zero point‚ Jamsher‚ Alra Jagir‚Fareedabad and Aaqil Agani Loop Bund.

According to the Flood Forecasting Division, the water level at the Kotri Barrage is constantly increasing.Moreover, the high flood tide of 555,000 cusecs water is passing through Chachran near Rahim Yar Khan in River Indus while the water discharge at Head Panjnad is 122,000 cusecs.

Talking to official radio, NDMA spokesman Kamran Zia said that the rains affected 931,074 people, killed at least 139 and wounded 804 others. He said the rains had hit 3,826 villages and destroyed 13,262 houses all over the country.

"Around 243 relief camps have been set up to help the people, mostly in the Punjab, Sindh and Balochistan," he informed.Flash flood in district Chitral also claimed lives of seven people while 80 houses were fully and 136 houses were partially damaged. Damages to the infrastructure included 119 irrigation channels,78 water supply schemes,34 roads and 38 bridges as well as 23pc of crop land area had been badly affected.

As many as 300 villages in district Jhang were affected by floodwater of the Chenab river. The Jhang city is surrounded by floodwater of Chenab and Jhelum rivers. Standing crops on thousands of acres of land were washed away by the flood in the district.

Two men drowned in floodwater in an attempt to rescue their relatives trapped in a flooded area in Jhang Bashir and Mehmood of Wijhlana along with their three friends reached a flooded area of Wijhlana with the help of a tube. They entered deep floodwater to rescue their family members trapped in a flooded area. They lost control over the tube and could not reach a bank. Three of them caught branches of trees and were saved from drowning but Bashir and Mehmood drowned in the water and their bodies were recovered by Rescue-1122 and later handed over to their families. The DCO under Section 144 had imposed a ban on entering the floodwater.

All roads leading to the Jhang city were under floodwater due to which there were shortages of vegetables, milk, meat and fodder in the city.The flood water discharged by India is likely to hit the Burewala sub-division areas on Friday. 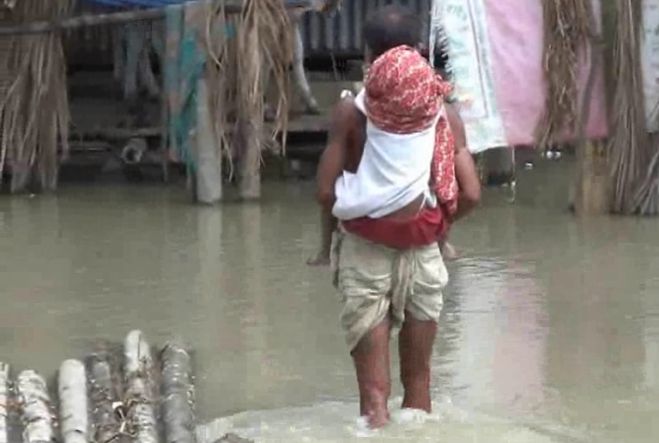 High tide under the impact of full moon, coupled with depression, has caused flooding of more than 60 villages in five upazilas of Bhola and Hatiya upazila of Noakhali.
In Bhola, due to the high tide, water of Meghna and Teutulia rivers started to rise from Monday afternoon, reports our correspondent.
When Meghna crossed its danger level yesterday, portions of Bhola-Charfession and Bhola-Laxmipur roads went under water, disrupting communications.
Locals said, water gushing through the breached points of the dyke inundated over 50 villages in Dhania, Kachia, Purbo Ilisha, Rajapur and Bapta unions in Sadar upazila, Sayedpur and Bhabanipur unions of Daulatkhan upazila, Baro Manika, Pokkhia, Hasan Nagar, Kutitsa unions of Borhauddin upazila, Chandpur, Chanchra, Sonapur unions of Tamajuddin upazila and Sakuchia union in Monpura upazila.
Flooding marooned several thousand people in 40 villages while homesteads of many were inundated.
In Hatiya upazila of Noakhali, at least 10 villages were flooded by tidal water as town protection dyke breach at too points yesterday noon, reports our correspondent.