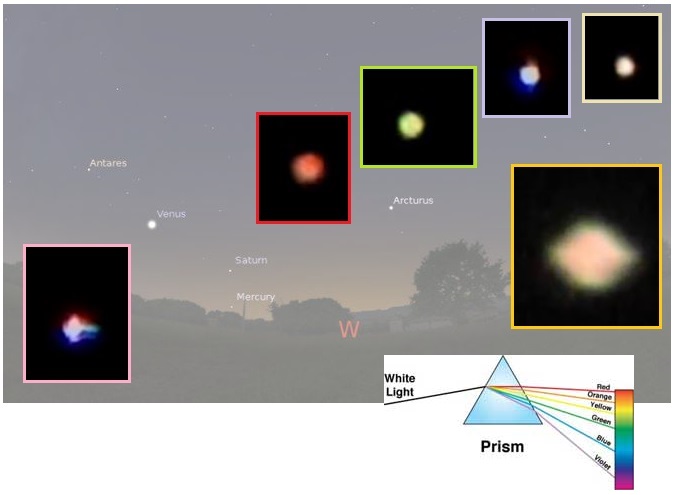 Only the Zetas would explain what is going on here. For months discussions have been going on in various forums about a bright planet-like object in the western skies. Not Venus as Venus could be seen. Not any known planet. Appearing in various colors, and hours earlier than when Venus was to be visible. What is it?

My question to the Zetas is, what exactly is that new star everyone is seeing in the West just after sunset.  It blinks red, white, green, and blue.  It’s not a star or planet.
[and from another]
October 19
http://www.godlikeproductions.com/forum1/message2387820/pg1
This object is visible just above the western horizon, right after sunset, but it disappears behind the horizon after only 30 minutes. It's not Venus. Venus dominates the sky a little later, in an entirely different location, and is white instead of orange. It's not Mars. Mars doesn't show up until closer to morning.  About 8:30 P.M. mountain time.
[and from another]
September 30
http://www.godlikeproductions.com/forum1/message2369689/pg1
It is NOT venus(you can see that clearly to the left/higher). It is NOT mercury(can hardly be seen @ all, certainly doesn't have disc like appendage). You can not see anything unusual with eyes only, HOWEVER with a pair of binoculars you can see a round, reddish object as bright as Venus BUT with something CLEARLY protruding from it that is disc like but open ended. This bright object-yes, I've been looking at it for months-is out as soon as the sun sets-actually, even before the sun sets it is visible. According to Stellarium, Venus doesn't come out until 11:00 PM. So, how on earth can that be Venus? Seriously? I want to believe it's Venus but it's visible at 7:30! According to almost 200 eye-witness reports - "There really is something strange in western sky around sunset!"
[and from another]
http://beforeitsnews.com/space/2013/10/new-star-in-the-western-sky-...
If you are looking at the western sky in the early evening, you will see Arcturus glowing as well as Venus.  You will also see a light to the left of Arcturus that is not defined by either SkEye or Stellarium.
You will see this bright light in the early evening in the western sky
[and from another]
http://www.youtube.com/watch?v=MM5zVETkjsk
[and from another]
http://www.youtube.com/watch?v=dzBo1zyN9t8
[and from another]
http://www.youtube.com/watch?v=Q8Ev5dmccV8

SOZT
Venus is in the western sky at present, and due to the tail of Planet X wafting in from the right of the Sun, after sundown the light of Venus is traveling through a lot of trash and dust. What does this do to the light rays, which are essentially sunlight reflected off the surface of Venus? Look at what a little water vapor in the air can do, producing a rainbow as drops of water become a prism, refracting light rays. Glass lens bend light rays. But what is it in the tail of Planet X, wafting between the Earth and Venus, that is creating this spectrum.

The colorful objects seen in the evening sky near Venus, puzzling many, are not where the actual object of Venus resides. That is seen as a WHITE planet. It is when white light, containing all spectrums, separate that a colorful ghost appears. Gravity will bend light rays in the red spectrum the most, which is evident to anyone looking at the rising or setting Sun when the Sun appears HUGE and red when at the horizon. A red and white persona
http://www.zetatalk.com/poleshft/p179.htm
was apparent when Planet X was inbound in 2002-2003. The white persona represented the true location, but due to the red dust surrounding Planet X, most light being captured was in the red spectrum, thus bent by gravity influences during the trip to telescopes on Earth.

Certainly a gravity pull coming from Planet X at this time accounts for the occasional RED appearance of the Venus ghost, as light in the red spectrum is taking a side trip. We have explained that the tail of Planet X is greasy, filled with petrol elements gathered from the Asteroid Belt, a graveyard of small planets that were smashed to pieces when Planet X passes through the Asteroid Belt in the past. Life existed there on these water planets, and the petrol components were formed from this life. Does not a grease or oil stain on the roadway form rainbows when reflecting light? The colorful  ghosts of Venus are yet one more proof that Planet X, aka Nibiru, exists and is riding between the Earth and the Sun!
EOZT

Prior 2002 ZT: http://www.zetatalk.com/teams/rogue/zeta4.htm
The team has correctly identified the Red and White candidates for the images taken on the night of Dec 3rd to Dec 4th. Due to the relative overhead position, compared to earlier imaging sessions where the scope was pointed more toward the horizon, the Red and White personas are closer together.

Prior 2003 ZT: http://www.zetatalk.com/poleshft/p179.htm
The first surprise was that two Personas presented, what was termed a Red and a White. This was due to the multiple light spectrums coming from the Planet X complex, more than one in the red spectrum range. Where filtering for red was done, there are many red spectrum waves, and the personas represented two distinct types of waves. The White, appearing on target for the coordinates, obviously Bent Less than the Red, which appeared more changed based on the gravity pull, the distance over the core of the Earth the rays had to travel.