A massive landslide, one of the biggest ever seen in North America and which registered on seismographs in Canada and the United States, has covered a more than 5-mile run of the Johns Hopkins Glacier in Glacier Bay National Park and Preserve like chocolate frosting on cake.

Coarsing down an unnamed valley that descends beneath 11,750-foot Lituya Mountain in Alaska's Fairweather Mountains, the muddy flow sloshed back and forth through the twists and turns of the valley, rattling and shaking the surrounding ridges and mountain flanks, which contributed their own snowy avalanches along the route.

While the exact volume of the slide has not been calculated, when it broke off the upper reaches of Lituya Mountain it registered as a relatively small, but noticeable, earthquake. But it wasn't the result of an earthquake.

“This thing is huge. It’s 9 kilometers long, so 5.5 miles long," Dr. Marten Geertsema, a research geomorphologist for the provincial Forest Service in British Columbia, said Tuesday from his Prince George office. "On the Canadian side it triggered a 3.7-magnitude earthquake. The (U.S. Geological Survey) recorded it at 3.4. That’s quite large for a seismic signal (from a landslide).

"... If someone was trekking up this glacier when it happened, they would have been toast."

The landslide occurred shortly before 2:30 p.m. local time on June 11. Its immensity wasn't fully comprehended until Drake Olson, an air taxi pilot, few over it July 2 and returned home with some incredible photographs.

"It spilled on top of the glacier and then it just rolled along the glacier," Lewis Sharman, a Park Service ecologist at Glacier Bay, said Tuesday. "The travel angle was calculated at about 13.7 degrees, which is not very steep, yet this stuff rolled down the glacier more than five miles.”

The slide is not readily visible from the ground or from boats on Glacier Bay, as it's estimated to be 12-15 miles "up glacier" from the bay and deep within the Fairweather Range. Since the glacier moves at a pace of 10-15 feet per day, park officials add, it could be years before this debris reaches the snout of the glacier.

So far a cause for the slide hasn't been determined. Whatever the cause, a massive slice of rock and ice peeled off Lituya Mountain.

“I haven’t had a good look at the mountain, but it’s a combination of ice and rock," said Dr. Geertsema. "And a big piece of that mountain broke off. But there was a large chunk of glacier sitting up there as well. That’s fairly common in that type of area."

The geomorphologist said the slide might have been caused by a breakdown in the permafrost on the mountain. "With permafrost degradation there’s a whole complex suite of fractures that develop. Some of them dialate, so they open and close, but some of them are permanent," he said. "And over time it progressively weakens, the rock mass. It could have been just ready to go. It’s hard to know what the factors are.”

Dr. Geertsema said he's aware of a similar, but much larger, slide that occurred in Russia and which ran about 20 miles.

"But this is the biggest one I’ve seen in North America," he added. "There might have been ones that are larger, I just don’t know about them.”

Is the landslide evidence of global warming? Is it a rare, but naturally occurring phenomena?

“I think it’s unusual in terms of its size. But they certainly happen," said Dr. Geertsema. "Right now I’m plotting all of these things. I’ve been doing some work in Switzerland and also here, looking at mountain permafrost degradation. That may or may not play a role in these things."

Another fascinating aspect of the slide is that it pushed a powerful "air blast" down the valley in front of it. In places the blast is thought to have tossed rocks and other debris as much as 1,600 feet above the slide's surface. Though the speed of the air blast hasn't been calculated, the Canadian geomorphologist said some have been clocked as fast as 200 mph.

“There was this big dust cloud, this air blast that traveled above the flowing rock mass. According to the pilot who sent me the picures, Drake Olson, there’s a lot of fist-sized stones that were ejected above the dust cloud as well," said Dr. Geertsema.

Back at Glacier Bay, ecologist Sharman said geomorphologists anticipate such landslides "becoming a little more frequent as we have warmer than usual temperatures, we have more melting events, and glaciers and surface sediments become better lubricated on surface terrain at elevation."

“Geomorphologists are not surprised that they’re starting to see more of these events. In any case, they’re rare of this size,” he said. 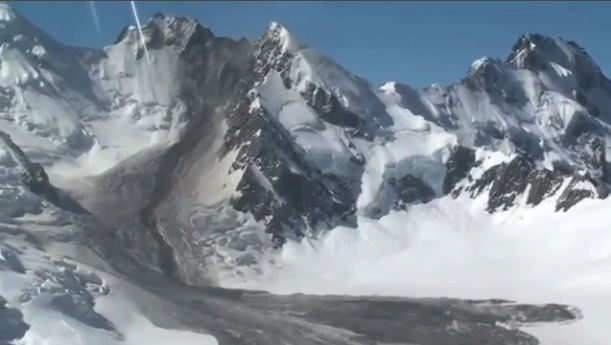 Mountaineers on Mt Cook have told rescuers of the moment a rock slide came surging towards them and described it as both terrifying and "pretty amazing".

A group of 15 people had to be evacuated by helicopter last night after the huge rock slide off the West Face of Mt Dixon, which fell about 900 metres shortly after 2pm.

It missed the popular alpine hut - Plateau Hut - where the group was situated, by around 150m.

Dramatic pictures show a huge mound of rock and smoke billowing from the mountain. The hut - just a speck - can just be made out.

Department of Conservation worker Shirley Slatter, who is based at Mt Cook, said it was a miracle no one was injured and it was very lucky the rock fall had not reached the hut.

After visiting the group yesterday afternoon, she said many of them described the moment as scary, while others said it was an amazing thing to see up close.

"They're certainly a little bit shaken. It was coming down at a fair rate ... and it was coming across the plateau towards the hut."

Chris Braugh, from the Helicopter Line, spotted the debris during a sightseeing trip and said it was the biggest he had seen.

"It would have been a pretty big roar."

The June 11, 2012 landslide in Glacier Bay National Park might be the largest ever recorded in North America, according to a story by AP on July 12 Glacier Bay National Park is located in the southeastern Alaska wilderness. It can be reached via a short flight from Juneau, Alaska. Image via National Park Service.

Landslides occur in all 50 U.S. states and territories, according to the U.S. Geological Survey. The Appalachian Mountains, the Rocky Mountains and the Pacific Coastal Ranges and some parts of Alaska and Hawaii have severe landslide problems. AP had a great story yesterday about a massive rock slide in Glacier Bay National Park earlier this summer. The event took place on June 11, 2012, but no one noticed it until a pilot happened to fly past the area a month later. According to AP’s story, some are now saying this landslide – which sent rock and ice pouring down a valley, over the top of a glacier – might be the largest ever recorded in North America.

Any area composed of very weak or fractured materials resting on a steep slope can experience landslides. Other natural disasters – such as earthquakes, volcanoes and wildfires – are often triggers, but landslides can also occur without those triggers.