Residents of a small island in Washington state are coming to grips with an early morning landslide that shocked their community and destroyed at least one home while endangering more than 30 others.

’I heard something loud, looked out my window and noticed I didn’t have any trees in the front yard anymore,’ said Bret Holmes, whose home was on the edge of the cliff. The area is known for its beautiful views, and is home to some of Washington’s wealthiest residents including Microsoft CEO Steve Ballmer.

A geotechnical engineer who was brought in after a landslide on Whidbey Island destroyed one home and forced the evacuation of 34 others told officials Wednesday night that the slide “is still active, the ground is still moving,” but that he had narrowed the area at risk.

“Kind of like a nightmare, literally,” homeowner Bret Holmes said. He said the nightmare began at about 4 a.m. Wednesday with a loud, booming sound.

His view of Admiralty Bay and the Puget Sound is no longer obscured, but he lost about 75 feet of property and the slide continues toward his house.

“It was pretty scary. I got out there with a flashlight and then just kept hearing a rumbling and watching more and more of it (the land) fall away,” Holmes said.

He wasn’t alone. Behind several homes, the massive slide tore away grass and earth and tossed trees like toothpicks all along a ridge. “I thought maybe a portion of it was always eroding, but that much of it? No, no. I mean, I lost over 50 percent of my yard,” said neighbor Delia Curt.

Neighbors rushed to the rescue, helping to pack up and carry anything they could grab.

“I just picked and chose what I wanted to take,” Curt said. “Don`t know if I can come back.”

The tech giant’s home was not destroyed but emergency crews cut across his lawn to save a neighbor who was in danger.  Mr Holmes told the Whidbey News Times that he has been losing ground at his property all morning; there was previously more than 30 feet of land to the bluff’s edge but now there is just 15 feet. He said the land started to give way after he heard what he described as ‘a sonic boom’. One house was destroyed and 33 others were isolated or threatened after the 500-yard-wide landslide wiped out the ground along the coast of the island. Luckily, no one was injured.  Eleven people from 16 homes along a road close to the water were evacuated by boat after the road became blocked by the landslide.
Another 20 to 25 people were evacuated from 17 homes along a road higher up the hill that is being threatened by the slide It was within 10 feet of one home – and a geotechnical engineer said the landslide was ‘still active’ last night. Whidbey Island officals say they were told ‘the ground is still moving’ by the expert from the Department of Natural Resources, who was brought in to test the soil in the wake of the dramatic scenes yesterday.
Officials said the slide broke across 400 to 500 yards on the hillside and downhill 600 or 700 yards to the water. Residents in Coupeville on Whidbey Island reported hearing a noise that sounded like rumbling thunder just after 4 a.m. on Wednesday as the land began to give way. Authorities said no one was hurt, but that a resident in the destroyed home had a pre-existing medical condition and was taken to the local hospital. ’I have no feelings whatsoever. I’m totally numb,’ resident Delia Curt told KOMO News. Neighbors began helping others to load furniture and other belongings on Wednesday afternoon in a frantic panic to get everyone away from the area. ’We don’t even know where the trucks are going,’ one woman told KOMO. Whidbey landslide: 'Where I had been standing was no longer there' [The Seattle Times; March 27, 2013]

A landslide early Wednesday morning took out a 1,000-foot stretch of hillside on the west side of Whidbey Island. There were no injuries, but several people were displaced. 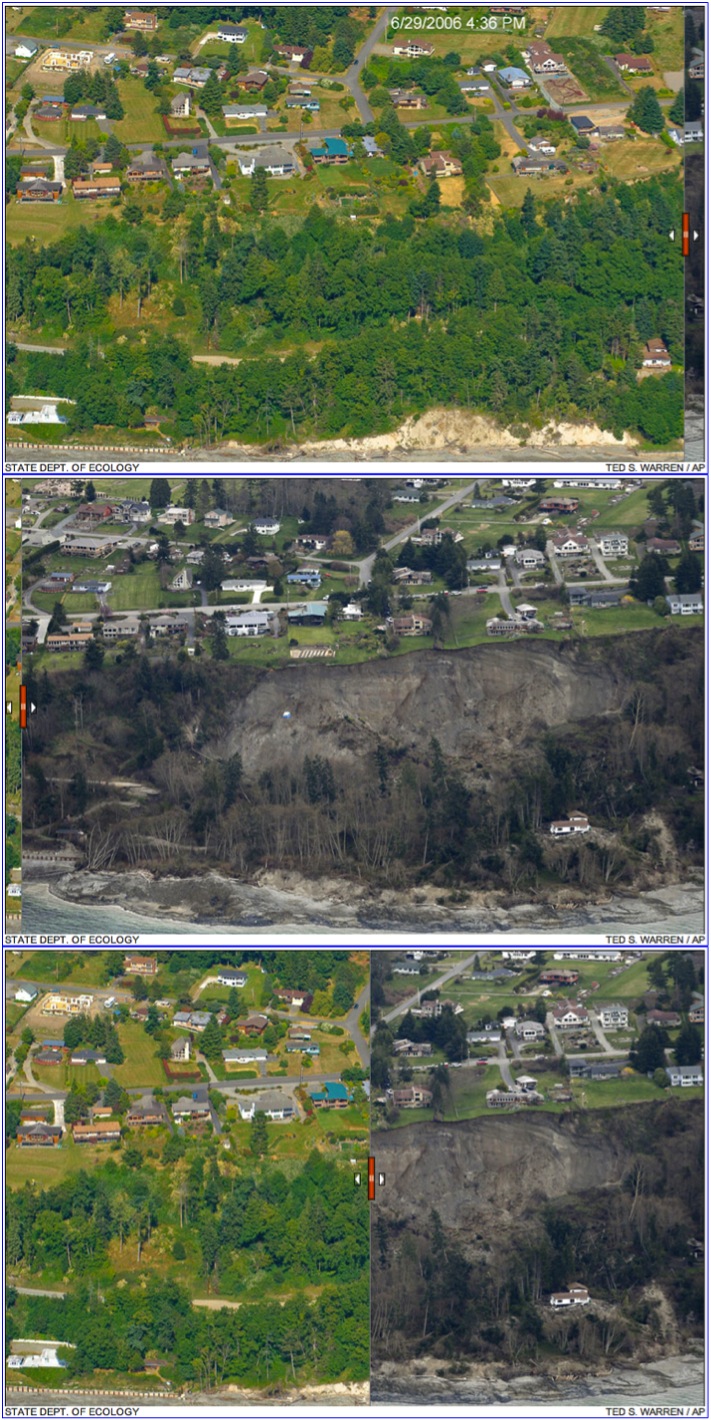 Slide the line in the middle from left to right to compare the before and after photos. Left: Photo of Whidbey Island in 2006, before the landslide that brought down much of this hillside. Right: An aerial photo shows Wednesday's damage.

See full-sized before and after →

Left: Photo of Whidbey Island in 2006, before the landslide that brought down much of this hillside. After: An aerial photo shows a landslide near Coupeville, Wash. on Whidbey Island, Wednesday, March 27, 2013. The slide severely damaged one home and isolated or threatened more than 30 on the island, about 50 miles north of Seattle in Puget Sound. No one was reported injured in the slide, which happened at about 4 a.m. Wednesday.