Sakurajima, Japan (CBS) -- Sakurajima continued its second day of violent eruptions on Tuesday, spewing hot rocks and ash, but there was no major damage in the vicinity, the Japanese Meteorological Agency said.

The agency said Monday's powerful eruption was the most forceful since 2009.

The volcano is located in the southern prefecture of Kagoshima.

The Meteorological Agency added that the volcano has been erupting steadily for the last two years, but the eruption on Monday turned violent, throwing 50-centimetre (1 foot 6 inches) rocks nearly 1.2 miles away, the furthest since 2009.

In response, the Meteorological agency extended the eruption warning to residents living further away from the mouth of the volcano.

The volcano has already had over 300 eruptions this year.

Sakurajima volcano, one of Japan's more active volcanoes, resumed activity in 1955 and has been active ever since.

Sakurajima volcano in Japan's southern Kagoshima prefecture erupts violently in what officials say is the most powerful since 2009, though there has been no damage so far.

JAPAN — Sakurajima volcano in southern Japan erupted Sunday with a few violent burps of gas and lava. Massive bursts of light shined through the ash cloud as the eruption took place.

Lava continues to run down the side of the volcano as onlookers watched from nearby raised freeway systems.

Here is a look from stationary cameras in the region:

Other plate movements in Japan -

Niigata slide wrecks 11 houses has grown to about 750 meters in len...

NIIGATA--The landslide that began in the Kokugawa district of Itakura Ward, Joetsu, in Niigata Prefecture on March 7 destroyed 11 houses and workshops by Tuesday, the Niigata prefectural government said.

The landslide, which continues to move, has grown to about 750 meters in length and 150 meters in width, it said.

The prefectural government made a makeshift three-meter-high, 240-meter-long wall out of sandbags during overnight work Monday to protect houses in the district.

The prefectural government said the landslide moved a maximum of 7.6 meters and an average of 63 centimeters per hour during the 12 hours leading up to 7 a.m. Tuesday.

There have been no reported casualties.

The Joetsu municipal government issued an evacuation order to 80 residents in 21 households.

A total of 52 people from 15 households are taking shelter at a community center and at their relatives' houses, the government said.

The prefectural government is continuing to drain water from the landslide sediment with the use of pipes.

"Unless the sediment dries, we can't carry it using heavy machinery," a prefectural government official said. "We don't even know when we can finish the operation to drain water."

Snow had accumulated to a maximum of about three meters but has melted to about two meters.

The landslide was caused by water from melted snow that collected above impermeable bedrock, reducing friction between the soil and the bedrock and causing sediment to move, said Naoki Watanabe, associate professor of Niigata University's Research Institute for Natural Hazards and Disaster Recovery

The Sakurajima volcano in Japan's southern Kagoshima region has erupted again for the second day running. 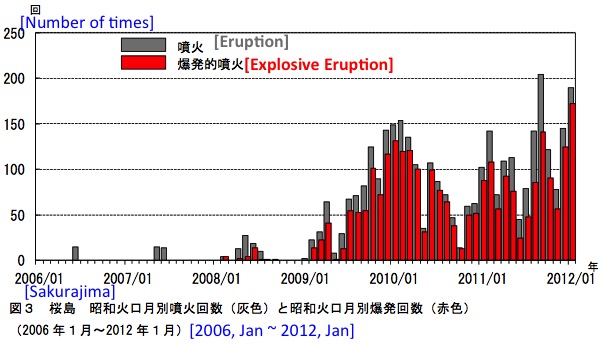 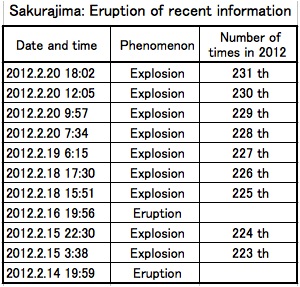 Along with the sinkholes in Korea and Philippines, this is showing movement in the plates!