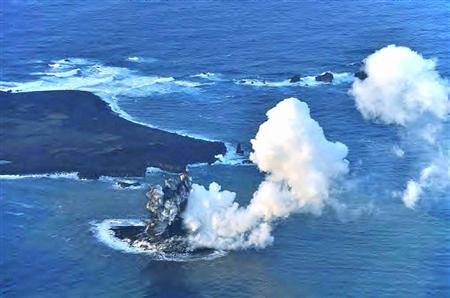 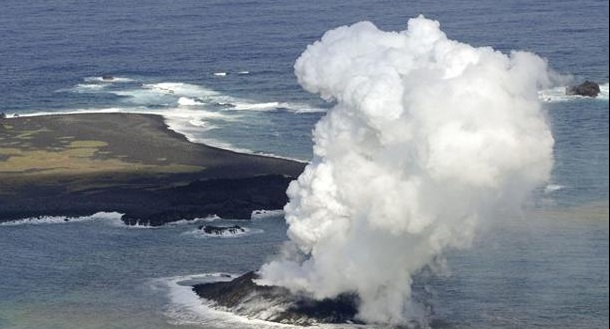 New Volcanic Island Off Japan Grows By 5 Times (May 19) 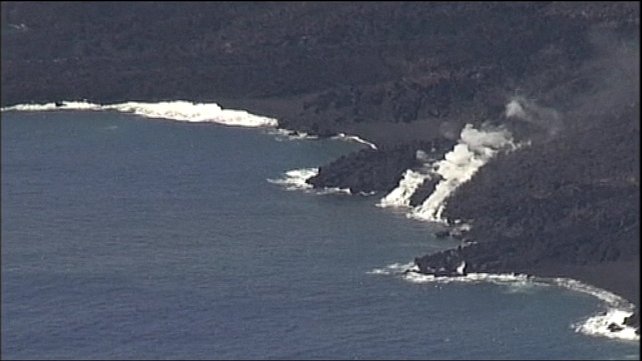 A remote island off the coast of Japan is bucking the trend of coastal erosion by gradually expanding due to lava which continues to flow from an active volcano.

The first eruption on the island of Nishinoshima in fourty years began in the seabed to the southeast of the island on 20 November 2013, and shortly afterwards a new land mass created by solidified lava merged with the island.

The island is now almost five times larger than it was before the eruption began.

Professor Kenji Nogami from Tokyo Institute of Technology says lava is continuing to flow from several locations on the newly expanded island.

Steam can be seen rising on the shore where lava comes into contact with seawater there.

Mr Nogami said it is unusual for a Japanese volcano to keep releasing lava for six months, and he is very surprised.

Mr Nogami added that the lava will continue flowing for a while and that the island is likely to keep expanding.

He said the continuous lava flow is a mystery and researchers will need to monitor the island and take rock and gas samples to learn more about the volcanic activity.

University of Tokyo Earthquake Research Institute assistant professor Fukashi Maeno said, "We can't tell when the eruption will stop, and the island is likely to continue growing." 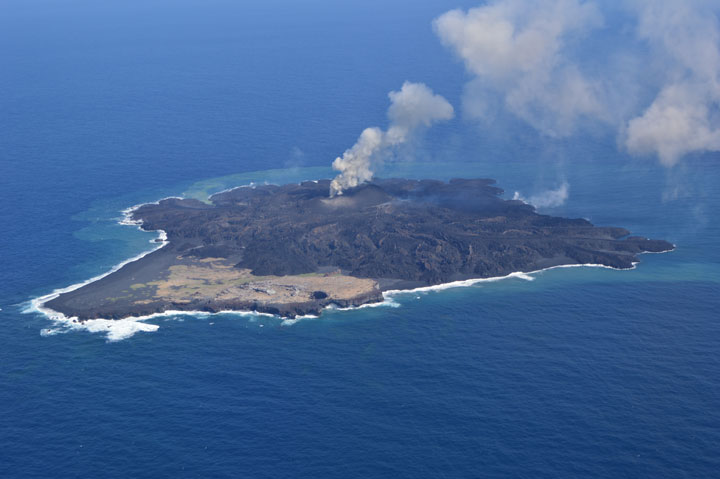 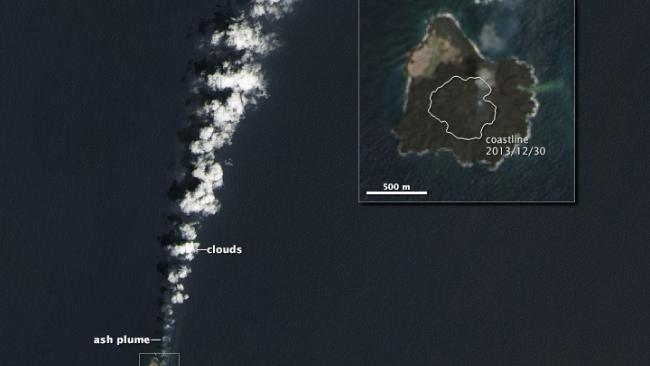 As a seafloor volcano continues to erupt in a remote part of the Pacific Ocean, a newborn island has swallowed its neighbor whole, images from space show.

In November 2013, a baby volcanic island rose from the sea out of a volcanic blast in the Bonin Islands about 620 miles (1,000 kilometers) south of Tokyo, on the western edge of the Pacific "Ring of Fire," a hotbed of seismic activity. Named Niijima, the newcomer boiled the sea and spewed steam, ash and lava fragments into the air.

Some thought the small black cone — which sprouted just offshore of a larger volcanic island called Nishino-shima — might slip back into the sea, vanishing under pounding waves. But Niijima kept growing.

Now a satellite image taken March 30, 2014, by the Operational Land Imager on Landsat 8 shows that Niijima has actually overtaken Nishino-shima.

Together, the conjoined islands measure about 3,280 feet (1,000 meters) across, officials with NASA's Earth Observatory said. The landmass has also tripled in height since December, now rising more than 196 feet (60 m) above sea level. The island continues to grow by progressing lava flows into several directions, as the latest images by the Japanese Coast Guard from 16 Feb show.

Its highest peak, formed by the western of the 2 active vents, was measured at 66 m, i.e. it now reached almost twice the height of the peak of the old island.

The new addition has more than doubled the size of the island so far.

It also formed a black-sand beach on the NE shore of the old part, as a result of lava fragments washed up by currents and waves. 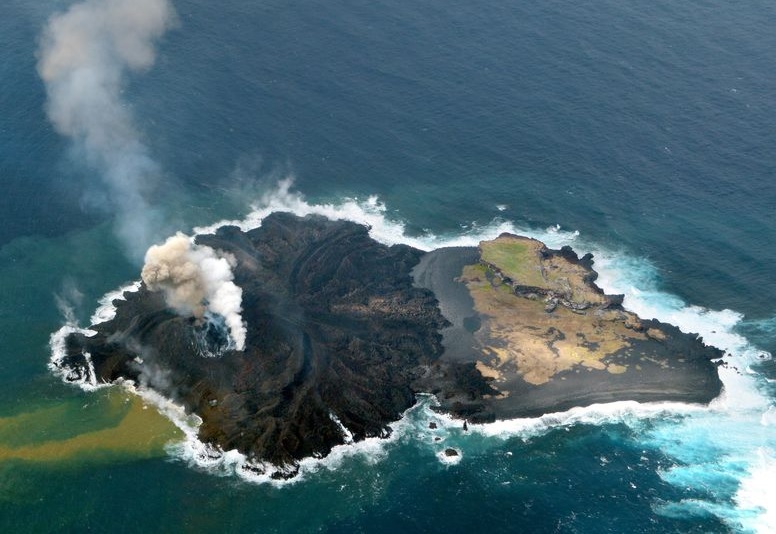 The new volcanic landmass, left, has grown 1.5 times larger than the original Nishinoshima island, right, and continues to expand westward. The photo was taken Jan. 20.

Japan's new volcanic island is growing so large, it could extend the range of Japan’s territorial waters.

Lava flows on the new isle that connected to a neighboring island in the Ogasawara chain south of Tokyo are redefining the borders of Japan’s exclusive economic zone (EEZ).

The small island, which emerged two months ago, has grown 1.5 times the size of Nishinoshima island, with which it became connected on Dec. 25, the Japan Coast Guard said.

According to the coast guard’s aerial observation Jan. 20, the new part of Nishinoshima island measures 0.3 square kilometers--seven times larger than Tokyo Dome stadium. It is 750 meters east to west, and 600 meters north to south.

The continuous lava flows spreading toward the west are widening Japan’s EEZ by a few square kilometers.

The EEZ in the west part of Nishinoshima extends to a distance of 200 nautical miles (370 km) out from the original coastline.

Based on the coast guard’s observation, the growing volcanic part of Nishinoshima expands the boundary of the EEZ up to 100 meters toward the west over a 100-km north-south section.

Additionally, Japan’s territorial waters, a zone extending 12 nautical miles (22 km) from the coastline, are also expected to widen by 10 square km toward the west, south and east.

More accurate figures for the expansion of Japan’s territorial waters will be measured once volcanic activity settles down on the landmass, said the coast guard. A smouldering islet created by undersea volcanic eruptions off Japan's Pacific coast has melded to a nearby island, the Japanese coastguard said Thursday.

Officials overflying the new landmass said it had merged at two points with Nishino-shima, an uninhabited volcanic island in the Ogasawara (Bonin) chain, some 1,000 kilometres south of Tokyo.

Two craters on the islet have been erupting "at an interval of 30 seconds to one minute," spewing brown smoke about 100 metres high, a coastguard statement said.

Pale volcanic gas and ash-grey smoke are also oozing out.

The islet was first spotted on November 20, some 200 metres from Nishino-shima, which is estimated to be 10 million years old.

It is now sized about 450 metres from east to west and 500 metres from north to south, with ground space measuring about 0.15 square kilometres, the statement said.

"The amount of volcanic smoke has apparently grown with a continuous flow of lava," Tokyo Institute of Technology geology professor Kenji Nogami reported from the plane.

"The supply of magma from the deep subsurface is presumably increasing."

Similar eruptions in the early 1970s and mid-80s created tiny islets in Japan's territory that have since been partially or completely eaten up by the ocean.

While the new formation is in uncontested waters, its emergence comes as Tokyo is embroiled in a row with Beijing over the sovereignty of a small archipelago in the East China Sea. The sudden appearance sparked quips from ministers about the expansion of Japan's territorial waters. 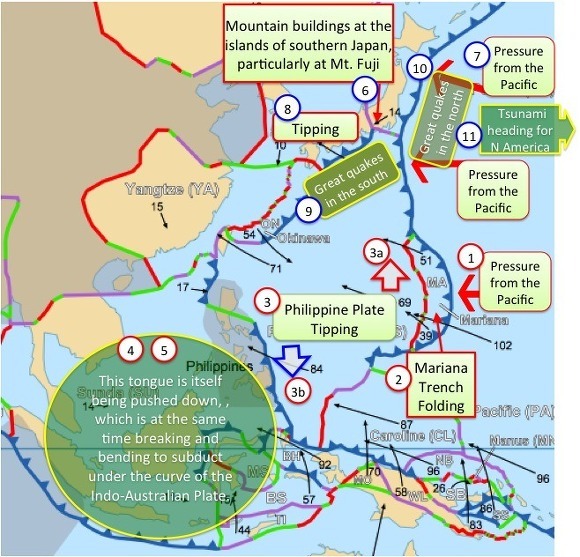 6)Mountain buildings at the islands of southern Japan. 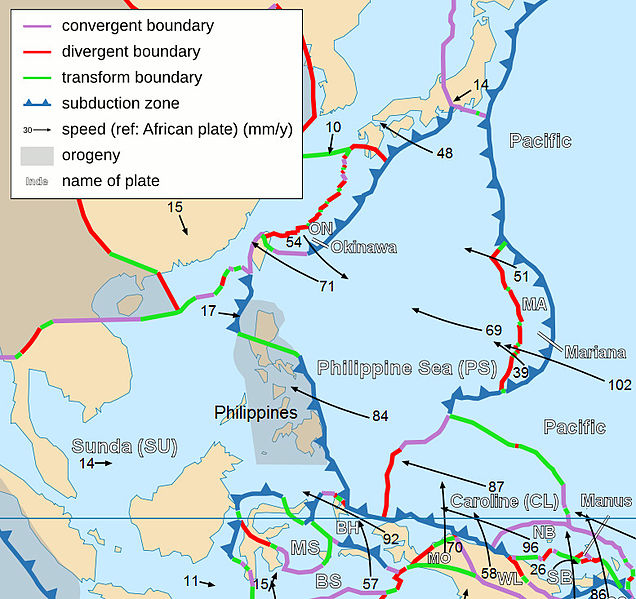 Abnormal values ​​in the Philippine Sea plate from the Ogasawara Islands