ISON & SUN approaching and disintegration by Alberto Cardin on January 5, 2014 at 2:47pm 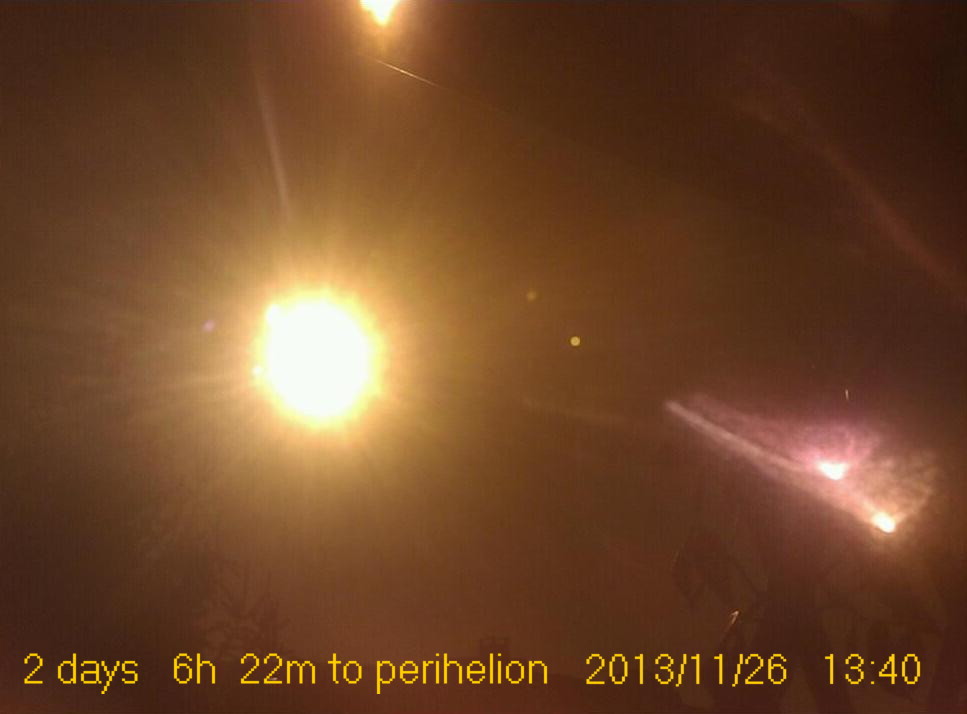 Look at it fragment! From one day to the next! You saw it HERE first, by our master photographer, Albero! And here, just below, is an animation of photos taken on 12/2 from 8:00 am to 4:00 pm, as the turning of the globe gives a different perspective. ISON has fragmented, and will dissipate as is the case in these instances.

This was a question on the Q&A for this week. The Zetas predicted ISON will not make it past the Sun, and there are reports from Hubble and some astronomers that they see this potential too. Alberto's photo, with a particularly dark screen to push out Planet X elements, shows ISON now with more than one head, the head fragmenting! Here's what the Zetas predicted just yesterday when I wrote the new ZT:

Wild speculation and lies about Comet ISON are increasing. Is there a chance the Council of Worlds will authorize interference with Comet ISON in order to end yet another Planet X/Nibiru related disinformation campaign?
[and from another]
http://spaceweather.com/
On Nov, 28th, Thanksgiving Day in the USA, it will fly through the sun's atmosphere little more than a million kilometers above the surface of the sun. At closest approach, the temperature of ISON's core could rise as high as 5000o Fahrenheit--an existential challenge for an icy comet. No one knows if it will survive.
[and from another]
http://spaceweathergallery.com/ison_gallery.html
[and from another]
http://hubblesite.org/hubble_discoveries/comet_ison
Comet ISON has undergone a new spate of activity as it draws ever closer to the Sun, including wing-like features that typically coincide with some fragmentation of the nucleus.
[and from another]
http://www.examiner.com/article/comet-ison-may-be-breaking-up
It's starting to increasingly look like Comet ISON, which at one time was viewed as potentially one of the most spectacular comets of the last hundred years (see last article), may not even survive long enough to make its' rendevous with the Sun on November 28th of this year. There had always been a concern among astronomers and cometary experts that this might happen, since Comet ISON will be coming so close to the Sun, but there had been cautious optimism that the cosmic visitor might survive its' encounter with the sun and provide us with an impressive show in the sky. ISON is expected to pass (about 730,000 miles, slightly less than the diameter of the Sun itself). However, evidence has begun to surface in the last few days that this might not be so. According to Ignacio Ferrin, an astrophysicist at the University of Antiquia in Medlin, Columbia, light signatures from ISON, which has just passed the orbit of Mars, indicate that it may be about to break up. According to Ferrin, comets generally get brighter and more luminous the closer they get to the sun. However, the light curve for ISON slowed down and remained nearly constant in its' brightness, even as the comet got closer to the sun. According to Ferrin, this behavior is similar to that of four other comets that have broken up before reaching perihelion. SOZT
That ISON is already fragmenting has already been officially acknowledged.
http://www.examiner.com/article/comet-ison-may-be-breaking-up
Elenin was assisted in its breakup
http://www.zetatalk.com/ning/03sp2011.htm
but ISON did not need assistance. Its multiple tails showed that the composition of ISON was such that voluminous outgassing was occurring even at a far reach from the Sun’s heat. The breakup of Elenin was considered necessary
http://www.zetatalk.com/ning/17sp2011.htm
by the Council of Worlds to embarrass the cover-up over the presence of Nibiru, aka Planet X. Though the same crowd is now backing all the hype about ISON, the much touted passage by the Sun will result in a dramatic fizzle just ahead of the announcement about the presence of Nibiru. The timing is such that it will be fireworks, a dramatic display during the death of the cover-up. A strong contrast between the truth and the lies that have been promulgated.
http://www.zetatalk.com/ning/28sp2013.htm
EOZT

Prior ZT: http://www.zetatalk.com/ning/28sp2013.htm
Comet ISON is just another dirty snowball, just another comet, so why the hype? Comet Elenin was to be used as a distraction for the Earth changes when the cover-up over the presence of Nibiru, aka Planet X, was alive and well in 2011. Once again we have a distraction with Comet ISON, with all manner of claims about its potential impact on the Earth. ISON is Nibiru, is the cry. Why, when the admission that Nibiru is real and in the inner solar system for years is about to occur, is anyone pushing the ISON disinformation? There are those who hope the announcement does not occur, so once again a comet is the excuse.

Prior ZT: http://www.zetatalk.com/ning/17sp2011.htm
The Rule of Non-Interference is not obvious to man. A schoolhouse where incarnated souls are allowed to make mistakes and learn from them, the full consequences of even the mistakes of others being allowed to play out, seems contrary to the image of a benign Council of Worlds. While maintaining the Element of Doubt, this occasional interference means bad luck for the cover-up and good luck, on occasion, for those of good heart, the Service-to-Other humans struggling with the cover-up.

Prior ZT: http://www.zetatalk.com/ning/03sp2011.htm
But suddenly things changed! Tiny Elenin, nothing more than ice and dust, was not venting steam into a brilliant tail but instead steam explosions were pushing the snowball apart, disintegrating. Although it is quite common for comets to disintegrate when they draw near the Sun, Elenin was assisted in this regard. The Council of Worlds allowed an interference to put an end to the campaign, which was considered a direct assault on the people of Earth and their right to be informed and to take steps to save themselves and their loved ones during the coming passage. Increasingly, steps will be taken to expose and disarm the cover-up, with the consequences likely to be that an angry public is demanding the truth.

More, of ISON's death and dismemberment. Alberto provides an update, showing the gradual disbursement of ISON parts and tail. He titles this photo "Sun with legs". Guys think like the head of a country. Obama's partners in this are Russia and China. Starvation is always round the corner in China because they have a huge population, one-child-per-family rule until recently. Obama needs their support because he was so blocked by the coverup crowd (tried EPS and Oval Office route and was blocked). The coverup crowd cannot reach into China and Russia, they are USA based. So, what would a big Northern Hemi country be concerned about before setting off riots and the like? The date was set in May after Obama met Xi in California. They would, all 3 of them, want the crops in so panic stricken city folk do not go crush the crops in the fields. They would want to force their citizens to sit and think it through, come up with a plan, rather than panic and run. Migrants are unlikely in the dead of winter. Since retailers traditionally  make 50% of their profits in December, Obama at a minimum would not want to disrupt the Christmas shopping sprees. Then China has their biggest holiday of the year at New Years. I'm just saying .. think like the head of a country in these matters.

This is a link to Lovejoy, which is a comet (in the past) which DID survive the Sun. Note the proper loop, and the head same size afterwards. ISON exploded and did not adhear to its path, did not emerge where expected, but a piece of it blew off to the left/top as result of the explosion.

Coming out the wrong place, not where expected, a fragment survived.

My take on this is that if I blow you up, and later someone finds your toe, this does NOT mean you survived.

"It does seem that comet ISON probably has not survived its journey," Naval Research Laboratory comet scientist Karl Battams said after looking at space images. "I am not seeing anything that emerges from behind the solar disk and that I think could be the nail in the coffin," he told a roundtable organized by the US space agency NASA.

A comet's 5.5-million-year journey to the inner solar system apparently ended during a suicidal trip around the sun, leaving no trace of its once-bright tail or even remnants of rock and dust, scientists said on Thursday.

Images from NASA spacecraft showed the comet approaching for a slingshot around the sun on Thursday, but nothing coming out on the other side. “It does seem like Comet ISON probably hasn’t survived this journey,” U.S. Navy solar researcher Karl Battams said in a Google+ hangout.

U.S. Navy solar researcher Karl Battams wrote on his blog that "it does appear that at least some small fraction of ISON has remained in one piece." He cautioned that even if there is a solid nucleus, it may not survive for long. The European Space Agency, which had declared ISON's death

Comment by Kris H on November 29, 2013 at 6:20am
Listening to BBC over NPR radio station, and now they are saying ISON has reappeared. Have not found a link online yet though.

Our #SOHO scientists have confirmed, comet #IISON is gone , thanks for sharing this comet-watching night with us

Telescopes saw the giant ball of ice and dust disappear behind the star, but then fail to emerge as expected. Astronomers continue to search for the object, but it is almost certain the much vaunted "Comet of the Century" has gone out with a whimper. Despite its great size, Ison was probably torn apart in the immense heat and tidal forces so close to the Sun.

The European and and US space agencies' Sun-watching Soho satellite observed Ison approach, and sweep, behind the Sun, but then fail to come back around. Minutes after the comet should have reappeared, the Soho images showed nothing. Perhaps some debris, but nothing significant. Other telescopes such as Nasa's Solar Dynamics Observatory could detect no obvious sign, either.

NASA hangout is having to admit that ISON disappeared. And Alberto's lastest photo shows that too. GONE! NASA hangout comments, has been going on for an hour since 1:00 pm ET. Sounds like ISON just disappeared! This is chatter, not NASA saying this, tho.

2:10 EST: “Nothing on SDO, and it’s strange. Possible coma never made it to corona of sun.”

1:59 EST: News is slowing down. Thoughts are ISON evaporated. ISON should have passed the sun at 1:48 EST. It’s a waiting game now.

1:48 EST: “It’s not looking good for ISON. No bright dot where the solid part of the comet would be”

1:40 EST: “There is no bright coma in the new pictures, ISON might have disintegrated.”

1:21 EST: Rumor is ISON has evaperated

1:19 EST: Nucleus of ISON is not as well defined as it was a few hours ago.