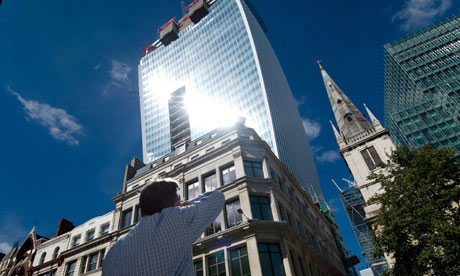 The Zetas have previously addressed the issue of the sun's increased intensity since Planet X arrived in the inner Solar System and started reflecting extra light back to Earth from its dust cloud; light that would normally not hit the Earth.

Now a businessman in London reports that a newly constructed skyscraper in Fenchurch street has melted his car with the sunlight it is reflecting down onto the street, with a themometer recording the temperature in the sun of almost 70 deg Celcius.  (and don't forget, it is September now!!!)

Blinding rays of light from a skyscraper in the City of London are being blamed for melting vehicles below it.

Developers of 20 Fenchurch Street, better known as the "Walkie-Talkie" because of its distinctive shape, are investigating reports of the damaging glare, and a number of nearby car parking spaces have been suspended, say reports.

Businessman Martin Lindsay said he was distraught when he returned to find his luxury Jaguar XJ saloon with warped panels along one side.

The wing mirror and badge had also melted from the heat of the reflected sunlight, he claimed.

"They’re going to have to think of something. I’m gutted. How can they let this continue?"

Another driver has also come forward to complain of damage to his Vauxhall Vivaro van.

Eddie Cannon, a heating and air conditioning engineer, said: "The van looks a total mess - every bit of plastic on the left hand side and everything on the dashboard has melted, including a bottle of Lucozade that looks like it has been baked."

The 37-storey skyscraper is still under construction.

In a joint statement, developers Land Securities and Canary Wharf, told the newspaper: "As a precautionary measure, the City of London has agreed to suspend three parking bays in the area which may be affected."

While it is true that the concave nature of the face of the building will have some effect on increasing the intensity of the sunlight experienced below, there are several factors to consider, especially if you want to compare it to the Vdara Hotel:

1. the concavity of the building is extremely slight as you can see from the picture in the article you linked to.  The likelihood is that the situation would be similar even if the building was completely straight. it is certainly nothing compared to the Vdara Hotel, which looks more like the shape of a satellite dish which is designed to concentrate signals to a singular point. 2. This is London in September, not Vegas in the Nevada desert so consider the expected difference in the sunlight experienced.

Since the two seem to be causing similar effects, it clearly shows that something unusual is still happening in London.

Don't forget, we're talking about melting cars here, not just plastic as was complained about in Vegas.  The car in question is a Jaguar XJS and their panels are made from aluminium.

Several reporters have been out to record more symptoms of the heat including, singed hair, burnt carpet, blistered paint, damaged tiles and the frying of an egg on the pavement.  One thermometer recorded a temperature of 92 deg Celcius!

I think this has more to do with the convex shape of the building face focusing the sunlight. They have a similar issue at the City Center in Las Vegas.

"This isn't the first time Viñoly's architecture has raised eyebrows as well as temperatures: His Vdara Hotel in Las Vegas has been criticized for directing sunbeams onto the swimming pool deck that are hot enough to melt plastic and singe people's hair. The hotspot became known as the "Vdara death ray."