A Cimuncang resident walks by a road damaged by landslide in Majalengka,

Landslides Force Nearly 2000 Out of Their Homes in West Java Village [Jakarta Globe; 3 May 2013]

Almost 2,000 people will be relocated from a village in West Java after continued ground movements and landslides have destroyed homes and infrastructure throughout the last two weeks.

An official on Friday said that 659 families, or 1,957 people, from Cimuncang village, Majalengka, will be moved as a result of the destruction.

The ground began to shift in the area on April 14 and has since slowly continued, collapsing houses and severing roads and bridges. Reports state that 587 houses, 16 houses of worship, one office and five schools have been damaged and that two kilometers of road and a bridge are now impassable. Three irrigation channels were also impacted.

“They are willing to be relocated to safer ground, that is in Wirasari village in the Malausma subdistrict of Majalengka,” Sutopo Purwo Nugroho, spokesman of the National Disaster Mitigation Agency (BNPB), said.

Sutopo said that the governments of West Java and the Majalengka district have prepared 38 hectares of land to relocate the people from Cimuncang, and will also provide them with financial assistance to rebuild homes.

“So far, they are still seeking shelter at the homes of families and friends and at two temporary shelters in Cimuncang and Ciranca villages,” he said.

The Majalengka disaster mitigation agency has also set up a soup kitchen and a health post at the two temporary shelters.

Sutopo said that the first soil movements took place in the Tai Urug hills, approximately one kilometer away from Cimuncang.

“The shifting soil is still taking place, but there has been no fatalities,” Sutopo said.

This article is included in the blog which Khan has posted prior to me. Thank you so much Khan.

1) Land in the village of Banyuresmi Torn Metrotvnews.com, Sumedang: Land in the Village Banyuresmi, District Sukasari, Sumedang, West Java, split along eight hectares, Wednesday (1/5). End nearly 12 houses collapsed.
No one knows for sure the cause of the land in the village Banyuresmi, chap. To be sure, according to residents, when the clock struck 23:00 pm, the ground suddenly shifted. Some residents falling roof tiles.
Not only that, the walls of some houses cracked, almost collapsed. Residents clearly frightened and chose to flee.
Adang, one of the residents who were displaced, claimed, forced to flee because of fear. His house was badly damaged, almost falling out. (Husni Nursyaf) 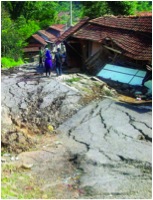 MAJALENGKA, KOMPAS.com - A total of 1,959 residents in the village Cimuncang, Majalengka, West Java, to Thursday (2/5), are still displaced. Landslides and soil movements that occur every day in the last two weeks resulted in 602 homes of 677 families in Block Cigintung damaged.
Citizens residing location is situated 70 kilometers north of the city of Cirebon was upset and anxious following their settlement amblesnya to 5 meters from its original state.
Residents Block Cigintung, Cimuncang village, refuge in the homes of their relatives or neighbors in Cimuncang and Ciranca. The house occupied two to five families. Refugees were depressed for days stayed crammed into the homes of their relatives and not being there is clarity relocation.
Disaster in Block Cigintung it stems from a landslide on Sunday (14/4), at 13:00. Avalanches occurred in the hills Tai Urug within 1 km of settlements in Block Cigintung. The first avalanche hit the 7 hectares of rice fields ready for harvest. Agricultural land and settlements that were chapped, bumpy, and shifted.
Visible in the field along the village street nearly 1 kilometer bumpy, crushed, and ambles up to 5 meters. The bottom of the sinkhole ground leaving large rocks and gravel. People's houses were collapsed one by one as the foundation shifts. The agricultural land that ambles stuck sticky clay and slippery. Rice-paddy was damaged yellowing.
District Disaster Response Team officers Malausma, Muhammad Ahmad, said the residents had fled Cigintung Block on April 15. On April 16, residents are fully evacuated. They made two shelters, which is in the village and Ciranca Cimuncang. Both villages that actually is about 2 km. However, because the village road that connects the two villages cut off by landslides, refugees forced to go around the hills as far as 9 miles from Cimuncang to Ciranca.
Promised relocation
Ground movements that occur every day in locations that resulted in widespread soil cracks. Initially, avalanches and land cracks only affect an area of 7 acres. Now, after 17 days, the disaster area to 300 acres. Soil cracks not only in Cimuncang village, but expanded to Lebakwangi village, located about 3 km from Cimuncang.
Yesterday, Majalengka Regent Sutrisno review the disaster site. He was looking for a decent land for the relocation of the disaster victims. However, there has been no significant reports of the local mayor. There has been no research on the phenomenon of soil moved in this Majalengka. However, based on their characteristics, the phenomenon was thought to be caused by too much water content in the soil.

"The trigger is a rising water table, so that the layer of soil above bedrock moves," said researchers from the Research Center for Geotechnology LIPI AdrinTohari to Liputan6.com in Jakarta, Thursday (05/02/2013).

Moving ground and ambles slowly. Not occur suddenly as landslides in general. "That type of movement rayapan, creeping movement. Appear subsidence-subsidence in some places," he said.

"Basically sloping rock layers, so the land is moving slowly.'s Why there were no fatalities, only the cracked buildings," Adrin added.

According to him, the amount of water content in Majalengka it could be due to several things. Among other high rainfall or land conversion.

Ground motion in Cigintung persist and are likely to increase up to 5 cm every 30 minute. In addition to building damage, ground motion that starts from the hill also destroy the village roads.

1 kilometer along the village roads are now increasingly menghkhawatirkan condition. Asphalt with concrete at the bottom was badly damaged and collapsed with a depth of more than 1 meter. (Ex)