JAKARTA , KOMPAS.com - Floods caused by heavy rains submissions which flushed the area of Bogor , West Java , on Thursday ( 05/12/2013 ) , causing the water to overflow in the Ciliwung River , Kampung Pulo , Kampung Melayu Urban Village , District Jatinegara , East Jakarta . A total of 7 RW in this area was flooded due to overflowing of the river water .

Daily Executive District Head Djatinegara , Manson Sinaga , said puddle in the settlement area residents in Kampung Melayu affect a total of 1,508 heads of households with 3,428 inhabitants. The soaking water level varies according neighborhoods . " The height of 30 cm to 150 cm . Total there are 7 RW and RT 47 , " Manson said to Kompas.com , Friday ( 06/12/2013 ) .

Manson said the flooded neighborhoods are within a radius of 15 meters from the banks of the Ciliwung River . Despite flooded , until now , people still persist in their residence . " Refugees do not exist , " said Manson .

Meanwhile , the floods also hit Bidaracina Village , District Jatinegara , East Jakarta . According to Manson , a total of 3 RW is affected by flooding in the region , namely RW 05 , RW 07 and RW 11 , amounting to approximately 459 families . Residents in this area are also no refuge .

Residents in Kampung Pulo , Kampung Melayu Urban Village , District Djatinegara , forced to use boats for transportation cork in the middle of their neighborhood flooded up to a height of adult neck . Most people opted to stay on the second floor of their house .

The number of motor vehicles and electronic goods evacuated residents on higher ground . Up to this time , no residents were displaced akibar the flood . 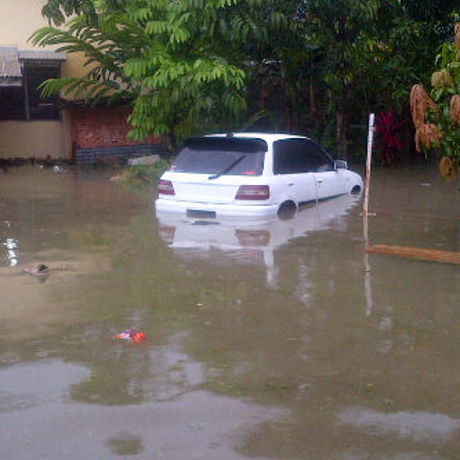 Many puddles along Jalan Subrantas in District Handsome , Pekanbaru . A number of points as solid lines west gate of the city , there is a pool of water that is high enough to cover the pavement section roadblock .

So also in a number of other housing . Puddles even to get into public housing . A number of residents in low-lying , resigned to wait for the water to decrease .

"Want drained from inside the house is not possible due to our own yard flooding . Forced us to wait until the water losses , can then clean up the house , " says M on Sunday , which flooded the sedan cars in the yard.

" This is due to the government not think of making sewer water . 's Why when it's a rainy day , the water can not move , because the area is not clear where the channel Handsome water when it rains , " complained M on Sunday .

Wednesday, 11/12/2013 - 17:35 Soreang (AFP ) . - Flood at some point in the District Baleendah , including Kampung Cieunteung , and Dayeuhkolot not due to overflow of Citarum River . Stagnant water due to overflow times plus poor drainage conditions .

Flooding in Cieunteung , said Ahmad , due to the overflow drainage and Cigosol time . Because , although the Citarum discharge was increased , the water will not overflow because retained embankment .

Because Cieunteung surface height is lower than the Citarum , by gravity , water can not flow into the Citarum . Efforts to prevent waterlogging in Cieunteung , Ahmad said , must be done by a suction pump machine .

While the land surface elevation Andir Village , District Baleendah , he said , is at 658.50 meters above sea level . Therefore , for example flooding , waterlogging in Andir be more shallow than Cieunteung .

Sediment dredging efforts , according to Ahmad , has been effective in reducing the potential for flooding . Since November 2012 , today it has been able to dredge 2.8 million cubic meters of sediment Citarum .

Regarding the continuation of polders Cieunteung , BBWS Citarum being discussed redesign project . Based on the study , an area of ​​one hectare polder inefficient in water siphon .

With an area of ​​one hectare , water suction pump unit must use five major power . It will require an enormous operational costs .

Ahmad said , different things if polder berluas five hectares . " Suctioning much easier . Most only require one pump unit , " he added .

Because of the study , it is possible , it expands polders . However , these efforts have yet to be implemented in the near future .

When it is , rusunawa only sixty families occupied . That is , the majority of Kampung Cieunteung still remained in their homes .

On Wednesday ( 11/12/2013 ) , though gradually receding , still puddles in the villages Cieunteung

The flood situation in Kampung Pulo still not receded. Jakarta - (11/12/2013) Region Kampung Pulo, Jatinegara, East Jakarta, on Wednesday morning, Flooded flooding, as high as five feet. The floods that inundated the region, since 06:00 am in the morning, presumably because water shipment from Bogor, West Java. Residents who want to indulge even forced the floods hit, to conduct its activities.
The flood situation in Kampung Pulo still not receded. Officers Disaster Response Team ( Tagana ) local , Sudarno , said the water level varies from half a meter to one meter at some point . However , water has begun to recede .

" Previously water had entered the house . Total existing home is submerged dozens more . However not so severe so no we evacuate people , " said Sudarno told reporters .

Although the water has receded , he appealed to citizens to be vigilant when flooding struck again . That's because the rainfall is high during the next few months .

While a resident of the village of Orange Rolls , Ainudin , said water began entering homes on Tuesday ( 10/12 ) morning after dawn . Fortunate during the day gradually receded .

" Flooding 's been happening almost every year . Moreover, the information is there badminton is broken due to not hold the amount of water the river Bengawan Madison , " said Ainudin .

Although flood inundation left to live , residents claimed quite disturbed . A number of village residents Sogo forced to go through a longer path if you want to get out of the village .

In addition , hundreds of hectares of rice fields in several villages in the district Balerejo also still under water . Rice plants was only about seven days damaged by flood.

Subdistrict Balerejo is one area in Madison County are prone to flooding during the rainy season occurs . In addition , there are also Sawahan and Madison are also prone to flooding because the area is located on the banks of the River Bengawan Madison. He said at the local Department of Agriculture is now flooded with a height of about one meter . In addition to the office area , the flood also inundated residential areas in the Inland area , Jalan Raden Soejarwo , and Lotus Road .

Then in the market , according to Octavian , also paralyzed activities. " Flood knee , so the activity is interrupted , " he said .

He added that the flooding allegedly caused by heavy rainfall in the area pehuluan Mempawah River which divides the city Mempawah .

" In the City Mempawah itself , this does not happen when the rainy , cloudy weather , " said Octavian .

He continued , despite the flooding , students at SMP Negeri 1 Mempawah keep doing the activity because of the ongoing final exams .

Mempawah town located about 87 kilometers to the north of the city of Pontianak . The city became the administrative center of Pontianak regency , while for economic center , in the River District Pinyuh . 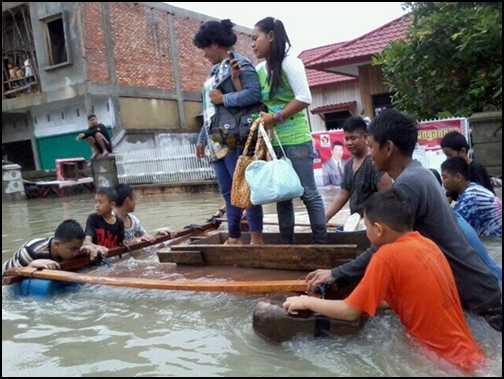 Behind the flood that occurred in the region and Tassel Tassel Coastal district during the last five days , it poses various impromptu service business opportunities .

There are many services offered impromptu . Call it , parking services count a night, raft rental services for transportation , shuttle services even charging gallons of clean water can penetrate floodwaters .

How creative sustenance hunting is acted by Riski , 12 years old boy sitting in the third grade at SDN 65 , of late after school , he was busy commute from homes to pick up an empty gallon then fill in a common wellbore that can be taken free .

Support equipment used by Riski when penetrating the flood is quite simple , to transport a gallon , he uses five banana tree trunks arranged and tied to resemble rafts .

The banana stem is pulled using ropes , " one day can fill up 10 gallons , " said the boy who lives in Jalan Coastal , Ex Meranti Pandak , District Coastal Tassel told the Tribune on Tuesday ( 10/12 ) .

Every gallon shuttle delivered Riski , he set a rate of $ 2 thousand . It may be relatively cheap price , considering the distance traveled to fetch water Riski commute could one kilometer even more , and even then only one order .

While Riski himself an orphan , three of four children , her mother sometimes worked as a clothes washer . Its activities earn a fortune d itengah flooding at least a little increase revenue , at least not to burden his mother .

Riski job is a bit of an overview of the many offers services in the area of ​​flooding , but the price offered is reasonable, because customers are fellow citizens who met daily , even his own neighbors .

You also might be able to take advantage of this opportunity to seek sustenance creatively , but without prejudice to the humanity of the flood victims who need help . ***

Heavy rains caused major flooding in both Pekanbaru and Kampar, Riau, on Friday.

At least 12 districts in Pekanbaru have been affected and several others in Kampar at a various levels of depth.

Thousands of houses have been inundated and all activities disrupted.

Dozens of school buildings in the two cities have also been submerged at a maximum depth of 1 meter. Major thoroughfares are flooded, cutting off transportation.

At residential complexes in Tampan and Rumbai districts in Pekanbaru, residents were seen moving their belongings to higher ground.

Local people claim that it is the worst flooding to have occurred this year. "Areas that used to be unaffected have been flooded too," Guntur, a resident of Marpoyan Damai district in Pekanbaru, said as quoted by Antara news agency. 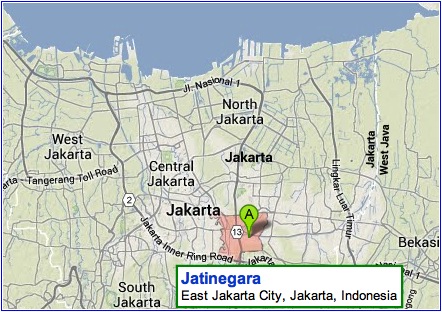