Mousuni, one of the 52 inhabited islands of the archipelago, and a vulnerable climate change hotspot, is sinking at a rapid pace. File photo.

Large parts of Mousuni, a sinking island in the Sunderbans archipelago, have been submerged with tides rising because of the spring equinox.

“More than 2,000 families have been affected and hundreds of acres of agricultural land and several fisheries have been destroyed by the high tides,” Sheikh Ilias, panchayat pradhan of Mousuni told The Hindu on Tuesday.

Ilias said that he himself was standing in knee-deep water. Mousuni, one of the 52 inhabited islands of the archipelago, and a vulnerable climate change hotspot, is sinking at a rapid pace. Kalpana Mandal, in her sixties, stood outside her tiny hut in Mousuni, a sinking island in the Sunderbans, with a long fishing net in her hand. All the land around her has been submerged, and hers is the last house standing. In a desperate attempt to save her humble abode from being washed away, Kalpana has covered most of her hut with the fishing net which she fastened at various points on the ground. But there is little hope of her dwelling being spared by the inexorable rising tide.

Since Sunday, large parts of Mousuni island have been under water, with hundreds of houses swept away by the rising tide caused by the Spring Equinox. “I have lost most of my possessions. Once this house is washed away, I will have to live on the streets,” Kalpana told The Hindu.

There are thousands like Kalpana on the island who have taken shelter either in flood relief camps or makeshift tents set up on the road. “Around 2,000 families in three villages of the island have been affected,” informed Tapas Mandal, Block Development Officer, Namkhana, under which the island falls. According to him, the situation has been worsened by the reluctance of the villagers to relocate to higher ground despite repeated requests from the administration. Mousuni Gram Panchayat Pradhan, Sk Ilias, said that more than three-fourths of the island, whose population stands at around 30,000, have been affected.

“Where do we relocate? We do not want any money from the government. All we have been asking is that the embankment is repaired so that our families can be spared,” said Basanta Giri, whose house was destroyed. There are over 12 km of embankments which need to be repaired, the villagers claim.

VISAKHAPATNAM: The shoreline erosion which has triggered widespread panic when it first occurred in January-end has struck again, where heavy tides uprooted several trees and brought down many houses along the shore near the Submarine Museum, Mangamaripeta, Uppada, Dibbadipalem apart from other areas in the city over the last two days.

Lack of concern and serious apathy from the officials of GVMC and the panel of members to fix the issue of beach erosion is proving to be a serious problem threatening the Port City’s prized possession: it’s picturesque coastline.

The measures suggested by the Oceanography experts and academicians to arrest the distressing phenomenon when it first occurred never materialised, leaving the citizens in fresh panic in the absence of action 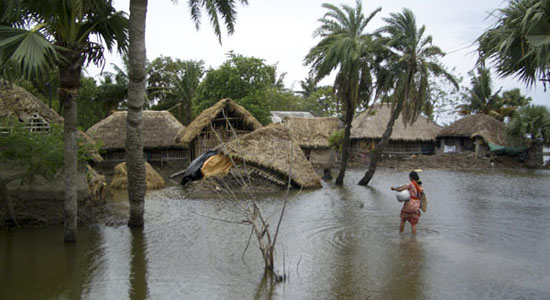 Flood water is flowing into the southernmost areas in Bangladesh. Near about 30 villages in the Bhola District, Barisal has been inundated after flood water from the overflowing Meghna River swept over broken dykes. The river levels have been swollen by recent rain fall, also dramatically increased after a high tide.Floods have affected the upazilas of Monpura, Charfashion(Bhola), Patuakhali, Barisal, Bagerhat and many areas. People of those areas are facing many problems. Houses, schools, mosques, farmland and fish enclosures have been flooded, with some areas are said to be under 5 feet of water. Transport has also been affected, particularly since many river ferry terminals and gangways are also under water.Pure drinking water, food and shelter are the common facts of the people. They are suffering by the heavy rainfall and tidal flood. One of the villagers said, “We are the poor, haven’t enough money to buy foods, can’t move to work. We are always in panic. Government isn’t taking proper steps through the year.”

Villages get flooded due to breaches in dykes 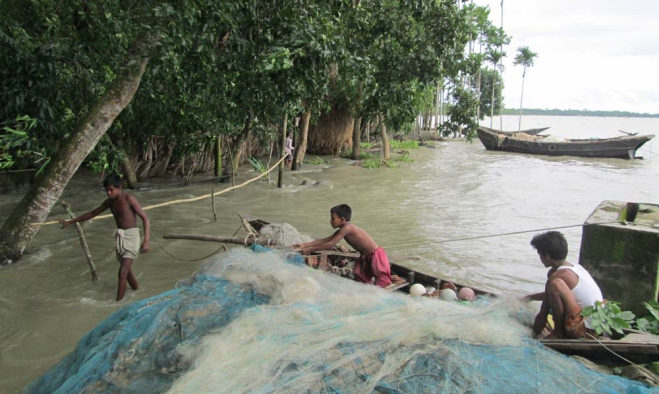 Water from Kacha River enters Togra village in Zianagar upazila of Pirojpur through the damaged portion of a dyke. The photo was taken on Monday. Photo: Star

People of the villages beside Kacha, Sandha and Baleshwar rivers face flooding during high tide, especially in the monsoon, as breached portions of the dykes have remained without repair for two years. According to Water Development Board (WDB) sources in Pirojpur, around 38 kilometres of a total 365 kilometres dyke in different upazilas of the district got damaged by natural disasters like floods, tidal surges and cyclones. In Mathbaria upazila, of the 128 kilometres flood control dyke, five kilometers got damaged totally while ten kilometers partly in Sapleza, Betmore Rajpara and Baro Macchua unions. Eight kilometres were washed away totally and ten kilometres partly of the 92 kilometres dyke in Sankarpasha, Shariktawla Dumritawla and Kawlakhali unions in Pirojpur Sadar upazila. Five kilometres of a 24-kilometre dyke beside Kacha and Baleshwar rivers in Balipar and Parerhat unions under Zianagar upazila were damaged. Three kilometres of the 78-km dyke in Telikhali union under Bhandaria upazila and two kilometres of the 24-km dyke in Kawkhali upazila got damaged. While visiting the damaged portions of the dykes in Pirojpur Sadar and Zianagar upazilas on Monday, this correspondent found that the riverside villages of the upazilas have been inundated due to high tide under the impact of full moon. Locals alleged that no steps have been taken yet to repair the damaged dykes. “We are facing untold suffering as my house has been flooded by tidal surge,” said Nasir Talukder, whose house is a few yards away from a damaged dyke beside Kacha River in Zianagar upazila. Contacted, Md Bazlur Rashid, executive engineer of WDB in Pirojpur, said they cannot repair the damaged dykes properly due to fund shortage. “We have sought fund from the higher authority to repair the damaged dykes,” the engineer said.