A rare natural spectacle took place on Saturday evening at the Lake of Zurich. Before Thalwil formed an impressive tornado. Reader-reporters have captured the phenomenon on film.

Shortly after 17:00 clock tonight, has a rare natural phenomenon occurred on Lake Zurich. While about four minutes built at the height before Thalwil a tornado. She was several meters wide and several hundred meters high.

"Tornadoes can be seen in Switzerland is very rare and are most likely in the Lake Constance region," says Roger Perret MeteoNews compared with 20 minutes online.

Tornadoes are usually harmless. The wind speeds are much lower than that of tornadoes that form over land. The meteorologist estimates the rate as that of a waterspout over Lake Zurich to 40-60 miles per hour.

After viewing the images relative to the weather expert readers the dimensions: "For Swiss conditions it was great, but an American would laugh about it."

This impression is confirmed by the maritime police have so far received no reports of damage.

STORM APPEARED IN THE MIDDLE OF SUMMER;  DENIZLI, TURKEY

Denizli experiencing the hottest summer in recent years.It was 40C during the day, but sudden storm, powerful winds and heavy downpour appeared in the evening caused panic.

Denizli is the roots of trees have been removed due to severe wind and thunderstorm knocked down trees, houses, offices and cars has led to property damage.
Watching over the air temperature is 40 degrees, which is effective in severe wind and thunderstorm in the evening, causing damage to the village was Duacılı Sarayköy township. The windows of a town due to heavy wind broken, the fallen tree on a vehicle, caused property damage. 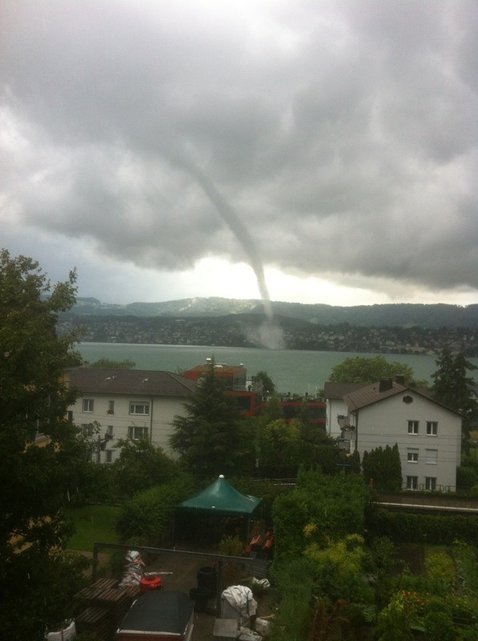