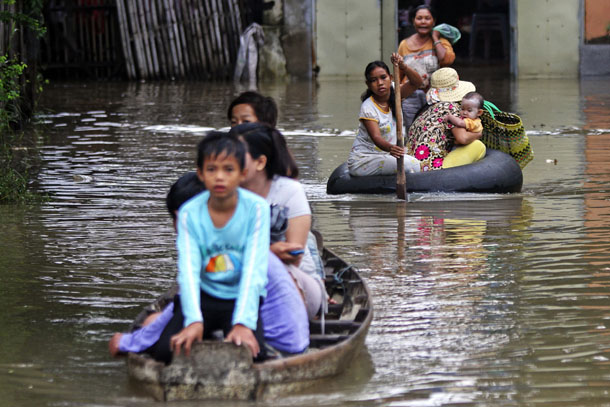 People make their way through a flooded area near the Mekong river in Phnom Penh on Tuesday. Floods have claimed at least 30 victims, since heavy rains spawned by tropical storms over the past two weeks caused the Mekong river to break its banks and inundate thousands of communities across 10 provinces in Cambodia, according to local media. REUTERS/Samrang Pring (CAMBODIA – Tags: DISASTER ENVIRONMENT)

The floods, caused by heavy monsoon rains and a succession of storms that have passed over the region, have killed at least 95 people and displaced tens of thousands, according to figures from the Red Cross and the United Nations.

The floods in Laos, which began in June, are reported to be the country’s worst in 35 years and have killed at least 20 people and affected 350,000, the Red Cross said, adding that food, drinking water and medicines are needed at once.

In Cambodia, up to 30 people have died and some 374,000 are affected, the United Nations said. More than 67,500 houses and 500 schools have been flooded, roads, bridges and other infrastructure are damaged and there are concerns Typhoon Wutip could worsen the situation in already flooded areas.

In Vietnam, more than 100,000 people in four provinces were evacuated before Typhoon Wutip made landfall on Sept. 30. Over 150,000 houses were damaged or collapsed as the typhoon passed, leaving almost 80,000 households sheltered by friends and neighbors, the Red Cross said.

Government figures in Thailand show that nearly 8,000 villages in 29 provinces have been affected by floods since Sept. 17. A total of 2.1 million people live in the affected areas.

“If the loss of 40 feet in elevation is not devastating to the Philippines, it is to the coastline of southern Burma, Tailand, and Cambodia, which have vast areas that will suddenly and permanently be flooded.” 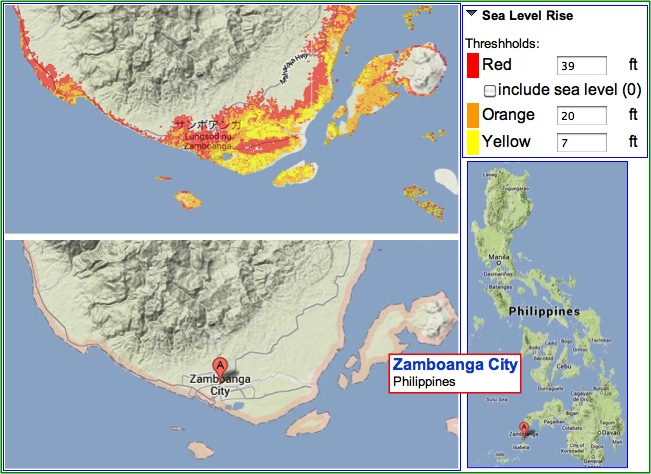 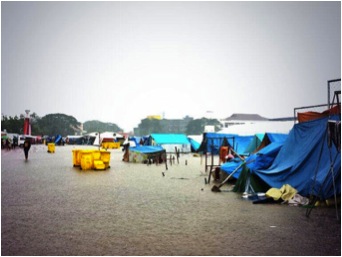 Mayor Beng Climaco in her Facebook post said the city government “calls off work in all government offices (local and national) in the city today, except those providing frontline services, due to widespread flooding.”

“Rescue teams have been dispatched to flooded areas as early as 3 a.m. today. Barangay officials are directed to utilize five percent of Calamity Fund and mobilize resources to assist their constituents,” she said.

The mayor also warned the people residing along riverbanks and low-lying areas to seek safer grounds while bad weather prevails in the city.

As of Monday afternoon, the National Disaster Risk Reduction and Management Council said there were about 3,000 persons displaced in Zamboanga City because of heavy rains.

An intertropical convergence zone was affecting Mindanao and is bringing the rains there. 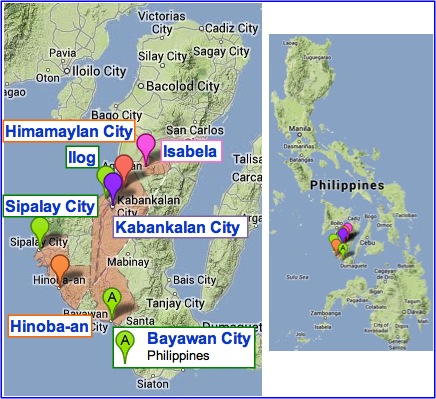 DUMAGUETE CITY (Updated, 2:15 p.m.) -- Two of the largest rivers in Bayawan City in Negros Oriental have overflowed due to more than 12-hour of uninterrupted heavy rains, causing landslides in several areas and residents from at least 13 barangays to evacuate.

Local DRRMC teams have been dispatched to monitor the situation and the water levels of various rivers and also alerted residents at risk.

As of this posting Sunday, government and non-government agencies are conducting search and rescue operations in Bayawan City, where some areas are already flooded with knee-deep up to waist high water levels, said officer in charge Provincial Police Director Superintendent Alet Virtucio.

"So far, no casualty has been reported although an undetermined number of residents have already evacuated to the basketball court at the city hall," he said.

Landslides have been reported in the barangays of Villareal and Pagatban in Bayawan City.

Two other landslides in the adjacent town of Sta. Catalina, specifically in Baranga Alangilan, were also cleared by bulldozers and payloaders from the Department of Public Works and Highways and from local government after it rendered the national highway impassable Saturday evening.

Several people and vehicles were stranded for hours until the clearing operations started in the evening.

Initial reports said flooded areas in Bayawan are all poblacion barangays of Suba, Banga, Villareal, Pagatban, and Maninihon with knee-deep and in some areas even higher waters.

Virtucio said some residents were reported to be on the roofs or on the second floor of their homes. A lone rubber boat has been rescuing people in the areas. Here's a photo of the flooding in Bayawan City, Negros Oriental on Sunday, October 6, 2013. (Photo by: Jomsy Villaflores Dela Cruz)

Sedillo said Governor Roel Degamo has sent an engineering team on Sunday to help in the clearing operations at the landslide area along the national highway in Barangay Alangilan, Sta. Catalina.

In Barangay Nagbalaye, Sta. Catalina, vehicles were stranded because of fallen trees blocking the road. Loader and other equipment and pruning team of Bayawan went to the area for clearing.

Meanwhile, the spillways in Malaunay and Ticala in Valencia town were also rendered impassable after the Okoy River water rose due to continuous rains.

People along the river banks in Valencia and Dumaguete City have been alerted and local government units are on standby for possible preemptive evacuation.

Many parts of Negros Oriental have been inundated in the past three days following continuous and steady downpour. (PNA/Sunnex)

Heavy rains since Thursday afternoon up to yesterday triggered flooding in southern Negros Occidental that affected about 30,055   residents.

As of last night, the floods had affected 6,011 families or about 30,055 individuals in Ilog, Hinoba-an and Isabela towns, and Kabankalan, Sipalay and Himamaylan cities.

The heavy rains were being brought on by the southwest monsoon and the inter-tropical convergence zone, not by a typhoon, Melvin Fierro Sr., Provincial Disaster Management Office weather forecaster, said.

There was also an accident involving a trailer carrying cement, whose malfunctioning brakes caused part of the vehicle to hang over the side of the road, rendering Talus bridge impassable for several hours yesterday, Salvador Benedicto Mayor Jose Max Ortiz added.

Clearing of the landslide and accident areas has been completed and the Salvador Benedicto roads as of yesterday afternoon were passable, Ortiz said.

The most number of families affected by the flooding were in Ilog town at 5,634 families in barangays 1, 2, Andulawan, Bocana, Calubang, Consuleo, Delicioso, Galicia, Manalad, Dancalan and Vista Alegre, Garcia said.

There are about five members per family for a total of 28,170 individuals although an exact figure will have to be determined, she added.

Only 53 families evacuated to the Calubang Elementary School, she said.

Ilog Mayor Genaro Rafael Alvarez has declared no classes today due to flooding, and heads of schools with two-storey buildings were instructed to prepare for evacuees.

Rep. Mercedes Alvarez (Neg. Occ., 6th District) said only a few had evacuated yesterday because, “Whenever we rescued families, they refused to leave because the rain had stopped, but the water was still rising.”

She said they had distributed relief goods and were on standby at Ilog proper for rescue operations.

Rescue groups from the PDMT, Kabankalan and 47th IB of the Army had also arrived in Ilog, she said.

Richard Gordon, Philippine Red Cross chairman, called to inform her that he is sending rescue boats and a team to Ilog, and the regional office of the Department of Social Welfare and Development informed her that they will send relief goods, Alvarez said.

Some Ilog roads were impassable to light vehicles yesterday.

In Hinoba-an town, 184 families or about 920 individuals from barangays Culipapa, Daug, Alim and Bulwangan had evacuated, while flooding was also reported in Bacuyangan, Asia, San Rafael and Talacagay, the Provincial Social Welfare and Development Office reported.

In Isabela, 41 families with 166 members from barangays Rumirang and 5 also evacuated, it said.

In Kabankalan City, 147 families or 831 individuals evacuated from barangays 1, 9, 6, Binicuil and Talubangi.

Coastal barangays are slowly flooding, agricultural crop lands are expected to sustain damage, and mountainous areas are on alert for possible landslides, he said.

“In these times of need, we call on all Filipinos to lend a helping hand to our countrymen facing these dire circumstances. Contributions in kind through canned goods, rice and clothes may be sent to my office in the Provincial Capitol,” he said.

Governor Alfredo Marañon Jr. has committed the support of the provincial government and they are personally visiting the affected barangays and helping distribute relief goods to ensure that they reach the intended recipients, Gatuslao added.*CPG 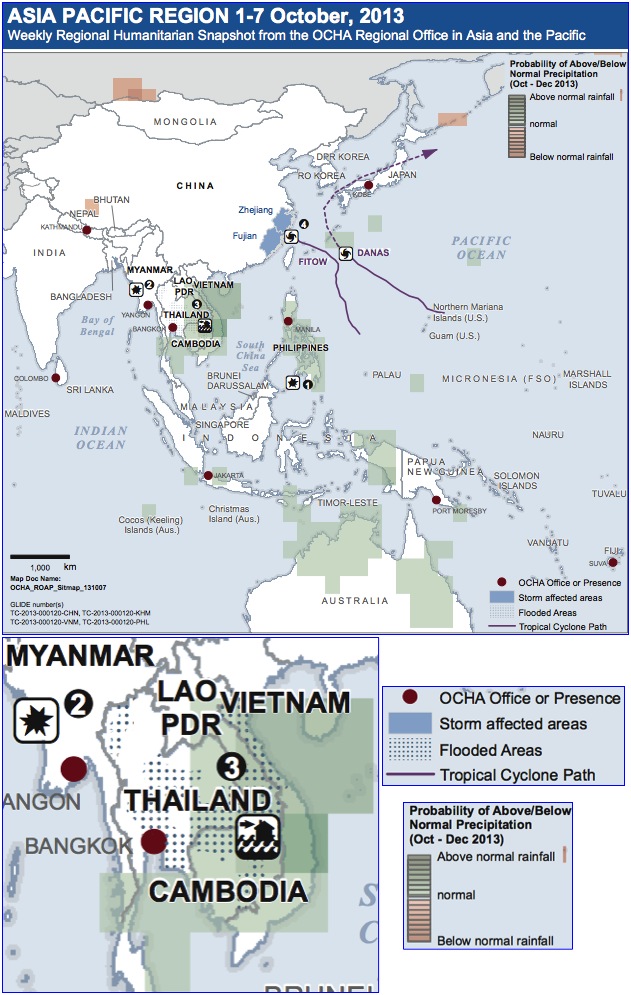 (1) PHILIPPINES Fighting has ended between a faction of the Moro National Liberation Front (MNLF) and Government forces. However, clearing operations continue in areas where unexploded ordinance (UXOs) remain. In Zamboanga, an estimated 120,000 people are displaced of which 52% are living inside evacuation centres. Seasonal flooding has knocked down temporary shelters worsening the living conditions of IDPs. A recent Government initiative to provide basic services to those living with host families has allowed a large number of displaced persons to move in with host communities. Source: NDRRMC, OCHA sitrep No. 6

(2) MYANMAR Violence between Muslims and Buddhists erupted last week in the townships of Thandwe and Tongup in Rakhine state. Five people were killed and four injured.An inter agency mission visited Thandwe on October 5 revealing some 100 houses burnt in seven to eight villages. Approximately 480 people have been left homeless and there are no plans to establish a camp. 14 families in Rakhine state are staying in a monastery fearing for their safety. The Myanmar Red Cross is providing assistance to the affected communities. Source: OCHA

(3) SOUTHEAST ASIA Heavy flooding, caused by seasonal rains and compounded by a tropical depression on 18 Sep and TC Wutip on 30 Sep, has affected large areas in SEAsia. In Thailand, as of 7 Oct, 183 districts in 28 provinces, comprising a total population of 1.9M people, have been affected by flooding. 36 people have been killed. The government has not requested assistance and notes that water levels are 20% less than they were in 2011. Forecasts predict less rain in the north and northeast as the monsoon season ends. In Lao PDR, as of 2 Oct, over 217,000 people were affected in the five southern provinces. Three people have died, 280 families were evacuated and nearly 1,500 houses were damaged or destroyed. The Government, with support from humanitarian agencies, is leading the response. In Vietnam, as of 1 Oct, over 106,000 in four provinces were evacuated in advance of TC Wutip. Three people were killed and another 35 injured. Assessments are ongoing and more information is expected shortly. In Cambodia, as of 30 Sep, over 372,000 people were affected in 10 provinces. Stung Treng and Kratie are the worst affected. 30 people have been killed thus far. The Government, Red Cross, and NGOs have provided immediate assistance. Results from rapid needs assessment teams are awaited and will be used for response planning purposes. The Humanitarian Response Forum is considering the submission of an Emergency Cash Grant application to OCHA for life-saving priority activities. Source: OCHA, UN, DDPM, NDMO, UN-VNM SitRep No.1, UN-LAO Sitrep No. 5, HRF Sitrep No. 1

(4) CHINA Tropical storm Fitow, packing winds of up to 121 km/h, made landfall in Fujian province early today, bringing heavy rainfall and causing widespread blackouts, according to media reports. In Zhejiang 574,000 people were evacuated, while in Fujian 177,000 were moved to safety. Source: Media

* THAILAND: As of 02 Oct, National News Bureau of Thailand reports: 25 provinces are still being affected by floods. As of 02 Oct: 10 889 people have had to evacuated, 27 dead. On 02-06 Oct heavy rains might affect central and E Thailand.

* CAMBODIA: Heavy rains since the third week of Sep, caused floods and flash floods in at least 10 provinces in northern and central Cambodia (along Mekong River). In total: ca. 374 000 people affected and 30 people died. On 02-03 October heavy rains might affect N, NE and SW Cambodia

* Philippine Sea: FITOW (“QUEDAN” in the Philippines) formed off the coast of Philippines on 30 Sep. It is forecast to move N towards Okinawa Islands (JAPAN), strengthening. As of 02 Oct, it is not expected to affect Philippines. 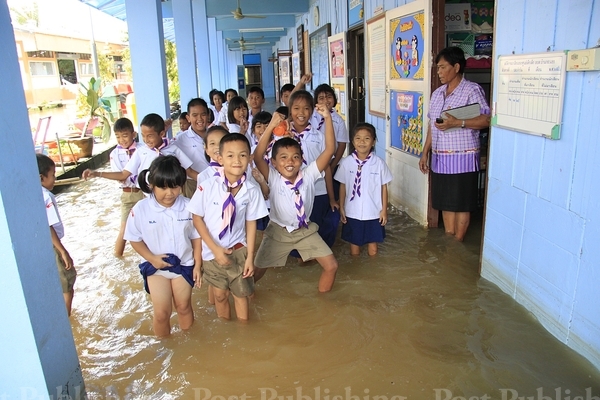