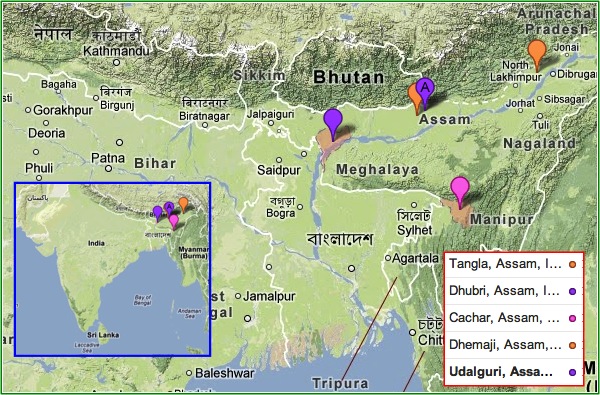 Water level in the Mullaperiyar dam in Kerala rose to 135 ft Wednesday evening, just short of its maximum capacity of 136 ft. Although rain has moderated in the catchment area, the water level has increased in the last couple of days.

According to the department of water resources, 4,560 cubic feet of water is flowing into the dam every second. “Tamil Nadu has been lifting more water in order to regulate the water level,” said officials.

Water resources minister PJ Joseph said the inflow into the dam was almost double to that of the diversion to Vaiga dam in Tamil Nadu.

Meanwhile, fresh landslides were reported at two locations at Naliyani, near Thodupuzha town, and at Villanchira, near Neryamangalam. There was no casualty. According to revenue officials, 130 families had been evacuated from Naliyani and lodged at a tribal school in Velliyamattam. Traffic through the Kochi- Dhanushkodi national highway was stalled partially due to the landslide at Villanchira. ZetaTalk  7/18/2009: All dams will break either during the pole shift or in the months leading up to the hour of the shift. Look at the structure of the dam! It assumes that rock holding both sides of the dam will remain in place and not move. Of course these sides will move. This is a subduction zone! There is mountain building and even where the mountains are not being pushed upward, they are moving from side to side. Some parts are more fluid than others, which are more resistant during any earthquake thrust, so there IS inevitably movement to the side. They will pull apart, slide forward or backwards, but in any case the water will find its way around the dam.
That an immense catastrophe would occur should one of the major dams break is not contested.

thanks kojima my post only had a video attached the devastation in India is terrible and there future does not look good either....

"Due to the compression of the Pacific during the forthcoming pole shift, India is forced under the Himalayan highlands, with a violent thrust of the Indo-Australian plate, which is strong enough to remain whole, yet the edges of which will separate from the surrounding plates so that it is free to move and slide under the Himalayas. Those in India will find, after the first strong jolts, that water is rapidly rising, coming in from the coast for those who live there, and coming from whatever area might be considered the lowland for those inland. Giant waves will not occur, just a rapid rise in the water, which will force man and animal alike to tread water for as long as possible, then drown. Those in boats will find a different scenario when the water reaches a height, as then vortexes, created by adjustments in the water, will capsize small boats and large alike. Those who would survive the coming cataclysms are advised to leave the lowlands, which in the case of India as well as western Australia, means leaving the country. Go high into the mountains, and out of reach of the turmoil that mountain building in the Himalayas will present.
Cities in the interior of India will not experience flooding until the hour of the pole shift, and then will be in shock. Unless our predictions, or some similar prophecy from a respected individual has warned the residents, they will have scant warning and no chance of escape. The last weeks, even rotation stoppage, will not bring the flood tide to these interior cities, though it will be clear that the passage is upon them. The flood tide will not be a crashing wave, as depicted in the movie 2012. It will be water rising, always rising, first along the rivers in the lowlands and then up through city street and then rising to cover the roof tops. Those in boats or clinging to floating objects will find the waters swirling, whirlpools developing suddenly, so boats will capsize and sink. The flood tide will close in on all sides of India, and meet in the middle, creating crashing waves in the center and rip tides as the water pulls back again. Drowning will be swift, and is fortunately painless, and for those with a firm belief in an afterlife can be faced with acceptance rather than panic."
http://zetatalk.com/info/tinfo24a.htm

Incessant rainfall for the past two days in the catchment areas of the Brahmaputra and its tributaries has inundated several villages in Upper and Lower Assam, even as eight persons were injured in a thunderstorm in Dhubri district.

In Lower Assam's Dhubri district, eight persons were injured in a thunderstorm with five injured in South Salmara town and three others at Bilasipara following a severe storm in the district last night, the sources said.

In Udalguri district in Lower Assam, over 30 villages have remained inundated for the second consecutive day with road connectivity to its remote Bhergaon sub-division snapped yesterday yet to be restored.

The affected people have taken shelter in schools and on high grounds with the district administration providing relief.

Water level of some of Brahmaputra's tributaries such as Nonai, Suklai and Kala has risen alarmingly due to continuous rainfall, the sources said.

Flood water has also entered Tangla township in nearby Darrang district, while some parts of Baksa district which borders Bhutan have also been affected, the sources said.

In Upper Assam's Dhemaji district, flash floods by the Telijan river has created havoc in around 15 villages in Jonai sub-division with hundreds of hectares of farm land submerged under water.

In Barak Valley, rising water levels of Barak river has cut off the National Highway 53 for some time disrupting transport in the Guwahati-Silchar route. 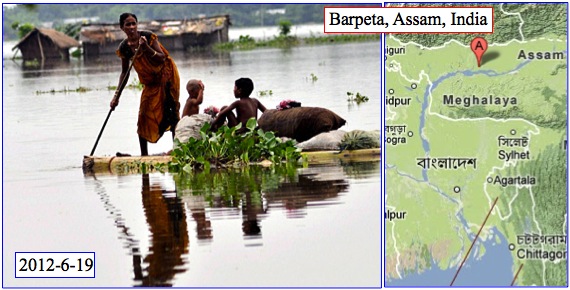