Landslide in Norway in the middle of winter? What exactly is happening there? On top of that, tons of herring found dead north of Norway as per blog post below.  It sounds like a stretch zone to me.
[and from another]
http://www.monstersandcritics.com/news/europe/features/article_1683...
A picture made available on 02 January 2012 shows an aerial view of a landslide that ripped through a rural area outside Trondheim, Norway, on 01 January 2012. Authorities in western Norway on 01 January 2012 issued an alert and ordered an evacuation following a landslide in a valley west of the city of Trondheim. At least 20 people were evacuated from their homes and farms in the rural area near Esp, but there were no initial reports of injuries or damage, the Norwegian news agency NTB reported.
[and from another]
Kvaenes, Tons of Herring found Dead North of Norway.
http://www.dagbladet.no/2012/01/02/nyheter/dyrenes_nyheter/innenrik...
Dagbladet): The inhabitants of resin in Troms could hardly believe his eyes on the morning of New Year's Eve, the beach was a large amount, an estimated tens of tons, dead herring, writes Northern Lights. No one knows for sure what's happened in the popular hiking area in Nordreisa municipality. 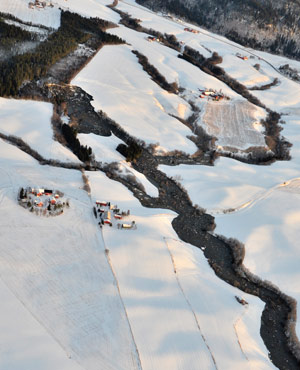 The massive landslide struck just south of Trondheim in central Norway prompting evacuation of dozens people from a rural area bordering Norway’s third largest city on Sunday. The river of muddy black sludge stretching about a kilometre (over half a mile) was moving through the area and geologists have been sent up in a helicopter to evaluate the danger.
http://thewatchers.adorraeli.com/2012/01/02/massive-landslide-struc...