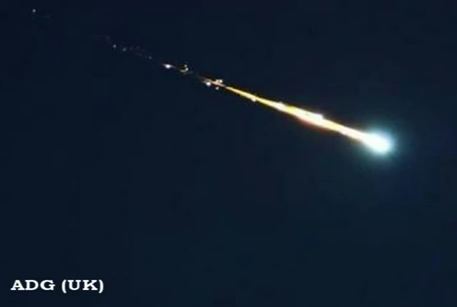 Coastguard and police forces up and down the country were inundated with reports from around 11pm on Friday night.

A spokesman for Forth Coastguard said: "From talking to other stations and to the RAF it's almost certainly meteorite activity.

"Calls came in from all over the place, thick and fast. We've had people report possible plane crashes, and others the weirdest fireworks they've ever seen.

"Folk just haven't known how to describe what they've seen. It's quite extraordinary."

The spokesman said reports had come from Crail, Johnshaven and Arbroath.

Clyde Coastguard said it had received a "flurry" of calls reporting flares seen in Drummore, Airdrie and Brodick on Arran.

A spokeswoman said: "When we get it all over and at the same time then we attribute them to meteorites. There was meteorite activity forecast from September 15 to 21."

Shetland Coastguard said a report of a flare at 11.10pm at Duncansby Head near John O'Groats was thought to be part of the meteorite shower.

"This incredible shooting star or meteor burned right over the UK today, it was seen all over the country, from London to Newcastle and some even claim as far as Scotland. Thanks to all my subs for emailing me the pics, and thanks to all the folks who snapped them, hope you made a wish. :)"

[Another] meteor in the sky Quebec

It was actually a meteor that exploded in entering our atmosphere. "The flash of light was caused by the entry into the atmosphere of a large piece of rock. Friction with the atmosphere produces a lot of heat energy, which is transmitted in the form of light, "explains Guillaume Poulin, science communicator at Astrolab du Mont-Mégantic.

I
comment:
And this estimate does not account for the likely dramatic increase in the frequency of the phenomenon ..

The brightness of the meteor Friday however, is quite special. "Balls of fire as we saw on Friday, it is not so common. According to various international organizations, it is about a meteor 12,000 becomes brighter. In my career as an astronomer, I have seen many meteor, but never so brilliant! "Says Guillaume Poulin.

According to the American Meteor Society, 45 reports were filed of a bright meteor flying by around 8:30 p.m. EDT on Friday over southeastern Canada and the northeastern US.

According to authorities, witnesses to the fireball were not sure what they had seen. Police were called because some thought it may have been a boat explosion. Water rescue crews from Oswego County began searching the water for that reason.

The search began in an area near Bridgeport, off of Shakelton Point. Crews went buoy to buoy before clearing the situation and standing down.

According to Sheriff Robert Maciol, Oneida County deputies assisted in giving the all clear.

Onondaga County helped by providing a helicopter for the search.

The American Meteor Society says a fireball is a meteor that is larger than normal. Most meteors are only the size of small pebbles. A meteor the size of a softball can produce light equivalent to a full moon for a short instant.

Scientist Robert Lunsford of the Meteor Society said, "I receive countless reports that the object landed just over the hill when in fact it was several hundred miles away and was witnessed over several states. It is your perspective that makes meteors appear to strike the horizon when in fact they are still high in the atmosphere. This is much like a jetliner seen low in your sky."

Many EarthSky Facebook friends are talking about – and Twitter is buzzing about – an extremely bright meteor, or possibly human-made debris from space – that broke up over the northern U.K. tonight (September 21, 2012). The sightings came around 2200 UTC (5 p.m. CDT). The meteor was traveling east to west. Many saw it!

This video shows it, but you have to look carefully, or even play it twice. Stuart Pitkeathly from Dalbeattie, Scotland posted it on YouTube a couple of hours ago. What ever it was it appears to be quite large in size before it broke up.