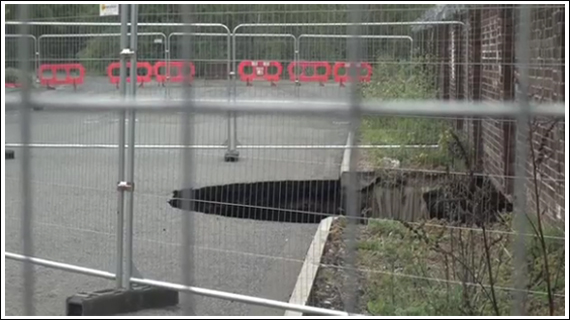 A huge hole in the road has appeared just yards from people’s homes in Newburn, near Newcastle.

The 10ft deep crater appeared suddenly on the afternoon of Thursday, May 17, taking an 8ft section of brick wall with it.

Police closed off the road for a while as experts from Newcastle City Council and Northumbria Water were called in to find the cause. Workmen were later called in to fill in the hole.

A police spokesman said: "There are a lot of mine workings around here. Possibly it is a coal working. We are still trying to work out what's happened. "

Lynsey McMeekin, 28, of Spencer Court, whose flat looks onto the hole, said: "It is just crazy. "When I saw all the police cordons I thought there must have been an accident. "

The crater expanded from Millfield Lane into land belonging to Just Brickwork Ltd after a dividing wall dramatically collapsed into the hole. Newburn Dene and a water culvert run underneath Millfield Lane and the Spencer Court flats, which were built in 2006.

The lane is one of the main access routes to the nearby Newburn Manor Primary School and is regularly used by parents dropping off their children at school.

Robert Lowes, 41, who lives on the nearby Manor Grove estate said the area had been blighted by sink holes for years. Just a few months ago a post box collapsed into a hole that appeared overnight.

He said: "There is subsidence all around here. "We have had other big dips in the tarmac all over the place.

"I know someone who has had a huge crack in their house."

Newcastle City Council engineers are investigating but do not currently know what caused the hole. http://tyneandwear.sky.com/news/article/20860