Earth Wobble? - Sanba has been the strongest tropical cyclone worldwide in 2012! Russia: Super typhoon "Sanba" - the most powerful typhoon in the past 20 years! "This was recorded only in the 80's of the last century" 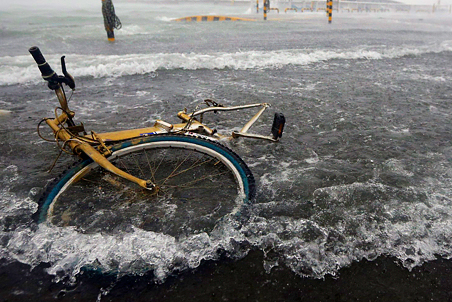 Primorye to hit the most powerful in 20 years typhoon

Primorsky Krai has been night in the center of the typhoon "Sanba." Because of the strong and not stopping now day showers recorded two landslides on the road, built to past APEC summit. Forecasters states that "Sanba" - the most powerful typhoon in the past 20 years. Rescuers expect flooding of new areas.

Rescue workers and government Primorye all last night reduced waterlogging of infrastructural facilities and transmission lines by Typhoon "Sanba", which hit the Far East on Monday. For a day at the Primorsky Territory had the monthly rainfall and strong wind gusts that sometimes reached 25 meters per second.

Due to incessant rains were partially flooded entrances to built specifically for the APEC summit in Vladivostok new airport. As reported in the regional emergencies department, now fire engines and pumps, pumping water from the parking lot and access road to the airport. Passengers can not drive up to the terminal by private car because of the huge lake formed on-site parking.

However, the airport authorities assured that everything is under control. "Part of the airport land is freed from the water. Who is pumped from the road, "- said Tuesday the head of the Public Relations Eugene Airport Hamitsevich, quoted by" Interfax ". She said the work on water pumping to be completed within two to three hours - this involved six vehicles, two portable pumps, two fire engines and two pumping stations. Despite the difficulties caused by the typhoon, no flight is not canceled, planes are sent and received on schedule, said airport spokesman.

"Because of the overlap of water across the road (in the Lazo district) there is a restriction of movement of cars and buses. Free travel is only for heavy trucks "- pass RIN" News "Shekhovtseva words.

He said that this is the only road in the province, which restricted movement due to flooding. "Storm sewer in Vladivostok now cleared at the same time, there remain some congestion on city roads. Community services work in full, "- said the chief lifeguard edge.

According to the regional administration, two landslides recorded on the road built for the APEC "Novy - De Vries - Sedanka - Patroclus," which was partially offset by the collapse of the retaining wall of the gas pipeline is on Sunday.


Then the landslide damaged the rocks, causing collapsed concrete retaining wall of the pipeline. By order of the governor of the region Vladimir Miklushevsky a special commission to investigate the causes of the first landslide damaged the retaining wall of the pipeline. Upon emergency prosecutors Primorye and the boundary of the Investigative Committee began checking.

"At night on the road in the streets Dobrowolski was slipping into a roadside ditch soil," - says the official report of the regional administration, which results in RIA "Novosti". Another slide of soil in an area of ​​the street Makovsky in Vladivostok. Now contractor engaged in construction line, started to export soil. However, the authorities claim that completely block off traffic on the highway was not required except for the section of the street Makovsky to Patroclus. Remove the temporary restrictions on the movement of transport officials plan to Tuesday evening.

Heavy wind damaged power lines in the guerrilla zone edge. The village has no electricity Ekaterinovka were 190 private houses, home to 467 people, and a kindergarten. In the village of Golden Valley Partyzansky without light were 860 people. In the administration of the province assured that Tuesday morning energy was restored.

Powerful typhoon "Sanba", which became the 16th this season in the north-west Pacific, formed on September 10 off the coast of the Philippines. Typhoon became the 16th of the season in the northwest Pacific Ocean. As RIA "Novosti", based on the data center monitoring and forecasting of typhoons in Tokyo, the maximum wind speed at the center of "Sanba" is 50 meters per second, with gusts up to 70 meters per second. "Sanba" is on the verge of becoming a supertyphoon - in this class typhoons pass when the maximum wind speed in which more than 50 meters per second. According to meteorologist Russia, "Sanba" approximately repeats the trajectory supertyphoon "Bolaven", from which the end of August also suffered Primorye.

Meteorologists state that "Sanba" - the most powerful typhoon to those that fell on the Riviera in the last 20 years.

Now, she says, the typhoon is over Vladivostok, but shifted to the north. In the afternoon the weather improved in the city, the rain diminished. "Projected loss is from 20 to 40 millimeters of rain," - said Gridneva.

Rescuers, however, be prepared for the worst.

"Day on September 18 across the province expected to be very heavy rain with rainfall up to 70 mm in some areas, up to 130 mm in 12 hours or less with wind of 13 to 18 meters per second, on the coast of gusts of 23 to 28 meters per second "- said in a statement on UMCHS Primorye. The rains will continue until September 19 - will fall to 14 mm in some places - up to 45 mm. Rescuers expected rise in water level of 1.5-2 m, and in the basin Razdolnaya to 4 m from flooding farmland, roads and bridges nizkovodnyh.

The threat of flooding remains in the October, Ussuri, Nadezhda, Michael, Chuguyivske, Spassky areas of the province.

For the past few days, parts of the Pacific Rim are contending with two very powerful storm systems. One is a tropical system, the other non-tropical, but both are producing very similar effects for the people who have been in the path of these storms.

The first storm Typhoon Sanba. It’s currently a category 2 typhoon and packing winds of 95 mph with gusts as high as 120 mph. This past Thursday, Sanba was a monster, category 5, super typhoon with sustained winds of 175 mph. It maintained this strength for 18 hours. Sanba is the strongest typhoon since October 2010 in the western Pacific. Sanba is the first and only category 5 typhoon on Earth in 2012. Below is a look at Sanba at peak intensity.

The Strongest Tropical Cyclone of 2012:  Sanba