OMAHA, Neb. (AP) — Baseball-sized hail was breaking windows and tearing siding off homes in northeast Nebraska, while tornadoes were spotted in Kansas and Oklahoma on Saturday as forecasters warned residents across the nation’s midsection to brace for “life threatening” weather.

Tornado sirens sounded across Oklahoma City before dawn, and at least three possible tornadoes were reported west and north of the city, said Oklahoma Department of Emergency Management official Michelann Ooten. Some homes were damaged, though no injuries were immediately reported in any of the states.

National Weather Service officials issued a stern warning for residents to prepare for overnight storms that could spawn fast-moving tornadoes. Officials said a large area could be at risk for dangerous storms.

“The threat isn’t over with tonight, unfortunately. Severe weather is possible again tomorrow from east Texas and Arkansas and up to into the Great Lakes,” said Bill Bunting, chief of operations at the Storm Prediction Center, which is part of the National Weather Service.

“This could go into, certainly, to overnight situations, which is always of immense concern to us,” Ooten said.

In Nebraska, Boone County Sheriff David Spiegel said the large hail also damaged vehicles and shattered windows in and around Petersburg, about 140 miles northwest of Omaha. Two possible tornadoes were reported father south in Nebraska near the Kansas border, according to the National Weather Service, which confirmed that at least one rain-wrapped tornado touched down in southwest Kansas and another in Oklahoma.

One of the suspected tornadoes in Oklahoma hit near the small town of Piedmont, taking a similar path as a tornado last May that killed several people, Mayor Valerie Thomerson said.

“Because of last year, we’ve had a lot of new people put storm centers into place,” the mayor said, adding that no major damage had been reported. “We’re all very anxious about this afternoon.”

The Storm Prediction Center gave the sobering warning that the outbreak could be a “high-end, life-threatening event.”

It was just the second time in U.S. history that the center issued a high-risk warning more than 24 hours in advance. The first was in April 2006, when nearly 100 tornadoes tore across the southeastern U.S., killing a dozen people and damaging more than 1,000 homes in Tennessee.

It’s possible to issue earlier warnings because improvements in storm modeling and technology are letting forecasters predict storms earlier and with greater confidence, said Chris Vaccaro, a spokesman for the National Weather Service. In the past, people often have had only minutes of warning when a siren went off.

“We’re quite sure (Saturday) will be a very busy and dangerous day in terms of large tornadoes in parts of the central and southern plains,” Vaccaro said Friday. “The ingredients are coming together.”

The threat prompted University of Nebraska-Lincoln athletic officials to cancel the annual spring football game minutes before Saturday’s kick-off. While the $10 tickets are non-refundable, the school expects to take a $400,000 hit in revenue from the sales of concessions and merchandise.

The McConnell Air Force Base in Wichita, Kan., has been relocating 16 aerial refueling tankers because of the risk of hail from the storms. Base spokeswoman, Lt. Jessica Brown, described the relocation of the planes to Grand Forks Air Force Base in North Dakota as a precaution, noting the tankers would be costly to fix.

The city of Norman, Okla., home to the University of Oklahoma campus, got a preview of the potential destruction on Friday when a twister whizzed by the nation’s tornado forecasting headquarters but caused little damage. Norman Regional Hospital and an affiliate treated 19 people for mainly “bumps and bruises,” hospital spokeswoman Kelly Wells said. 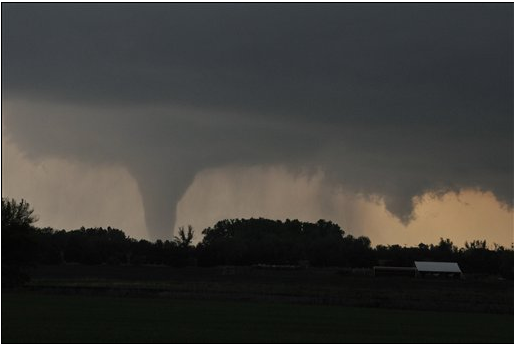 Tornadoes reported across the Midwest and Plains on Saturday and early Sunday left five people dead in Oklahoma and damaged houses, a hospital, a jail, an Air Force base and other buildings around the region, officials said.

Oklahoma authorities said five people died early Sunday after a tornado hit in and around the northwest Oklahoma town of Woodward. Oklahoma Department of Emergency Management spokeswoman Keli Cain said the state medical examiner's office confirmed the fatalities in the Woodward area. She didn't know the gender or age of the victims or details of their deaths.

Woodward Mayor Roscoe Hill said the sirens were not apparently working when the tornado struck, although they had been sounding loudly from storms on Saturday afternoon. The tornado hit in a mixed area of residences and businesses, Hill said.

Storms also were reported in Kansas, Iowa and Nebraska.

National Weather Service forecasters issued sobering outlooks that the worst of the weather would hit around nightfall, predicting that conditions were right for exceptionally strong tornadoes. Weather officials and emergency management officials worried most about what would happen if strong storms hit when people were sleeping, not paying attention to weather reports and unlikely to hear warning sirens.

When it's dark, it's also more difficult for weather spotters to clearly see funnel clouds or tornadoes.

In Kansas, a reported tornado in Wichita caused damage at McConnell Air Force Base and the Spirit AeroSystems and Boeing plants. A mobile home park was heavily damaged in the city, although no injuries or deaths were reported.

Yvonne Tucker rushed to a shelter with about 60 of her neighbors at Pinaire Mobile Home Park. She said people were crying and screaming, and the shelter's lights went out when the twister hit. When they came back outside, they found several homes destroyed, including Tucker's.

"I didn't think it was that bad until I walked down my street and everything is gone," said Tucker, 49. "I don't know what to do. I don't know where to go. I've seen it on TV, but when it happens to you it is unreal.

Iowa emergency officials said a large part of the town of Thurman in the western part of the state was destroyed Saturday night, possibly by a tornado, but no one was injured or killed. Fremont County Emergency Management Director Mike Crecelius said about 75 percent of the 250-person town was destroyed. Some residents took refuge at the City Hall.

A hospital in Creston, about 75 miles southwest of Des Moines, suffered roof damage and had some of its windows blown out by the storm, but patients and staff were not hurt. Medical center officials were calling other area hospitals to determine how many beds they had available in case they needed to move patients.

In Nebraska, baseball-sized hail shattered windows and tore siding from houses in and around Petersburg, about 140 miles northwest of Omaha.  In southeast Nebraska, an apparent tornado took down barns, large trees and some small rural structures. Johnson County emergency director Clint Strayhorn said he was trying to determine the twister's duration and the damage it caused.

"I'm on a 2-mile stretch that this thing is on the ground and I haven't even gotten to the end of it yet," he said, walking the path of destruction near the Johnson-Nemaha county line. He didn't immediately know of any injuries.

At least 10 tornadoes were reported in Kansas, mostly in rural parts of the western and central sections of the state. A suspected tornado narrowly avoided Salina, meteorologists said. Another was on the ground for about a half-hour north of Dodge City.

Sedgwick County, home to Wichita, declared a state of disaster and said preliminary estimates suggest damages could be as high as $283 million.

Kristin Dean, who was among the Wichita mobile home residents taking shelter during the storm, said she was shaking as she was being pushed from home in her wheelchair. She was able to grab a bag of her possessions before going into the shelter and that was all she had left. She lost her mobile home, and the windows in her car shattered.

"It got still," the 37-year-old woman, who's in a wheelchair after hurting her leg a month ago, recalled of the scene inside the shelter. "Then we heard a wham, things flying. Everybody screamed, huddling together.

"It is devastating, but you know we are alive."

Kansas Division of Emergency Management spokeswoman Sharon Watson said Rice County was the only other Kansas county to issue a disaster declaration. Several buildings in the county were damaged, including the one housing the sheriff's department and jail. Inmates were transferred to another facility because of the damage.

Homes were damaged or destroyed in 10 other Kansas counties, Watson said.

Warnings for more serious storms continued. Bill Bunting, chief of operations at the Storm Prediction Center, said severe weather is possible Sunday "from east Texas and Arkansas and up into the Great Lakes."

"The threat isn't over with tonight, unfortunately," he said Saturday.